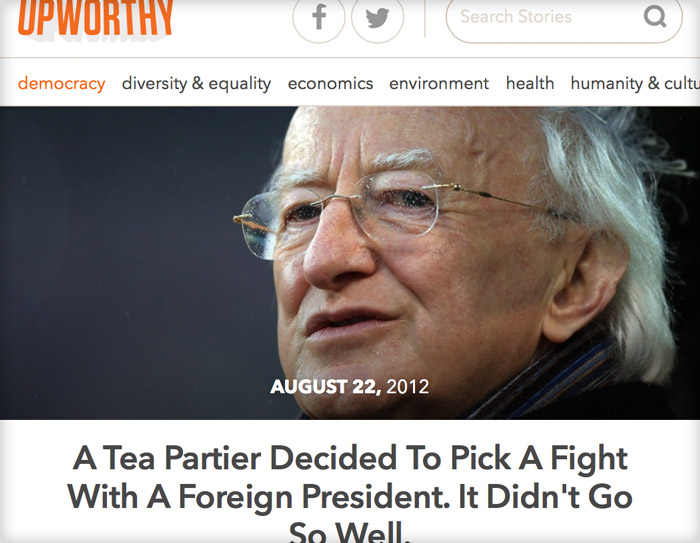 President Michael D Higgins was the subject of one of the original Upworthy successes.

Picture the scene: the first week of class. Our protagonist: a particularly enthusiastic, if naive, fresher. Location: somewhere in the middle floors of the Ussher Library. Our hero walks in, overwhelmed by the vista, yet hoping for a good start to their academic career, and sits down between a bedraggled final-year law student with enough notes to fill a small library and a bored third-year BESS student scrolling through Facebook, full of quiet jealousy at the photos of friends on Erasmus in exotic locales.

After turning on their laptop, our first year gives a brief check of Facebook, but this is where the problems start. A choice arises which will shape the next four years. To click, or not to click. At the top of the newsfeed is a link that is both curious and banal, providing enough information to arouse the part of our brain which insists upon having our curiosity sated, and yet not enough to actually do so. The topic seems trivial, yet somehow vital. One tap of the mousepad later, and our fresher has begun a deep dive into the world of clickbait, rarely to be seen again.

Clickbait was not originally the beast it is today. Upworthy.com, that bastion of good on the “cruel and heartless” internet, has a curiously Irish aspect to its successful rise. Their first million click story was titled “A Tea Partier Decided To Pick A Fight With A Foreign President. It Didn’t Go So Well”, featuring our very own Michael D leading the charge for common sense. When initially published, it achieved moderate success. When Upworthy and their staff of professional headline writers got their hands on it, it became a very different story.

At the top of the newsfeed is a link that is both curious and banal, providing enough information to arouse the part of our brain which insists upon having our curiosity sated

Fluffy Upworthy stories have mutated into more cynical creatures: content-aggregator websites, where the story is a distant second to the headline. Inspired by a data-driven and analytical method of producing content, the article is often completely ripped from another page, though structured so as to derive the maximum in advertising revenue. The economics behind these websites demonstrate that online eyeballs, in sufficient quantities, are more valuable than paid subscribers.

As clickbait grows, backlash against it also thrives. Think pieces have been published at every journalistic establishment of record, railing against where the industry of online news is headed. The satirical website The Onion launched Clickhole, which, alongside creations like the Twitter account “Saved You A Click”, exists to mercilessly mock the culture.

There are also many articles pontificating on the dangers of the clickbait scourge and warning about where the industry of online news is going. And it’s true that there are real consequences to the rise of clickbait-driven media. Established news institutions have already suffered heavily and struggle to prioritise which content needs to be produced – that which will get read or that which pursues truth and good journalism. What I think most upsets people is when a supposedly reputable site of journalistic integrity succumbs to the urge to write those headlines which strive to titillate and so often merely infuriate. We don’t like to see the New York Times or the Guardian brought down to the level of ViralNova or TMZ, but it may be the cost of doing business online in this age.

What I think most upsets people is when a supposedly reputable site of journalistic integrity succumbs to the urge to write those headlines which strive to titillate and so often merely infuriate.

The late David Carr wrote in the New York Times about his fears for the future of journalism and what might happen to the profession if it becomes entirely pay-by-the-click. If current trends continue, this future may be one with a dearth of informative and in-depth content, and an excess of light, bright, meaningless click-centric articles. While it seems a bit much to say that clicking on that initial link is an act with far-reaching consequences, pageviews are the dominant metric by which those sites measure success and sell themselves to advertising companies.

And so I think it’s important to ask those students who find themselves scrolling endlessly through the bottomless pit of links that is the internet to stop and think for a moment about the cultural activity they are participating in. We are all complicit in the rise of meaningless clickbait, and should consider whether or not we want to partake any longer.