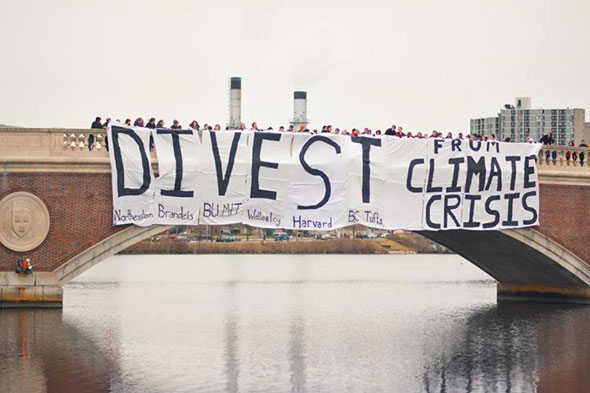 Protests held in Boston in December 2013 were formed by groups of students from several of the city's universities.

A campaign is to be launched to call on Trinity to divest from fossil fuels, The University Times has learned.

A freedom of information request seen by The University Times has revealed that Trinity, as of June 30th, had €6.1 million indirectly invested in oil-related stocks, through its investment in funds managed by Irish Life Investment Managers, an asset-management group. This figure equates to 3.5 per cent of the total value of Trinity’s endowment fund.

The fund, which has a total value of €170 million, is a trust fund made up of donations to the College. All of the fund is invested in a variety of indexed life assurance funds managed by Irish Life Investment Managers. While the principal proportion of an endowment fund always remains intact, universities use such funds to gain investment income which then can be used for ongoing support of their activities.

College does not currently invest directly in fossil fuels, and it has no control over where the overall Irish Life funds are invested in. 3.5 per cent, however, is a significant proportion of the endowment to be invested in oil-related companies, in the context of global university divestment campaigns. The campaign says that Trinity could reinvest the endowment in “clean” funds that do not themselves invest in fossil fuels, but it is not clear how much of a financial hit Trinity would take.

Lynn Ruane, President of Trinity College Dublin Students’ Union, expressed her hope that a motion calling for a divestment campaign in College would be brought to the first meeting of the union’s student council, which is due to be held on Tuesday. Expressing her support for a campaign, she told The University Times that once a motion is passed by council, TCDSU can begin “looking at sustainability and having a serious conversation about divesting away from fossil fuels”.

Brian Marron, the psychology and geography Trinity graduate who submitted the freedom of information request, has told The University Times that he is optimistic that students will get behind a divestment campaign: “I think that climate change is something that a lot of Trinity students are passionate about, and in the coming months as we approach the climate change conference in Paris, it’s something that is going to be talked about a lot”.

Áine O’Gorman, chair of Trinity Environmental Society, the group spearheading the campaign, spoke to The University Times about how important divestment is if we are to effectively deal with the challenges of global warming and climate change: “There are so many bad things that come out of investment in fossil fuels. The sea levels are going to rise, cities like New York, cities like Dublin – all these cities are going to have huge flooding issues. It’s not good”. She added that the crucial thing about divestment campaigns, regardless of the amount institutions actually have invested, is that they send a signal: “Every single institution that divests sends a message to fossil fuel companies saying ‘No, you have to stop’”.

On the fact that Trinity’s investment in oil related stocks is indirectly invested through a privately managed fund, O’Gorman emphasised that this does not absolve Trinity from unethical investments: “I don’t think it makes a difference. Your money is your money. The fossil fuels companies don’t go: ‘Oh yes, Trinity is indirectly investing in us’. Fossil fuel companies see money coming in”.

O’Gorman hopes that Trinity can become a pioneer in investing in more sustainable forms of energy, which she believes could provide the same economic returns as fossil fuels: “We’re not asking Trinity to become bankrupt. We’re asking them to become ethical”.

Campaigns for divestment have multiplied in recent years, with numerous organisations such as The Guardian Media Group and the Church of England announcing this year that they will divest in fossil fuels. Indeed, in June, Norway announced that the country’s government pension fund will divest the majority of its assets from the coal industry.

Students have been at the forefront of divestment campaigns in universities around the world. In 2012, Harvard students launched the “Divest Harvard” campaign, with the aim of forcing the university to withdraw its $11.8 million investment in fossil fuels. However, Harvard has continued to directly invest in fossil fuels, increasing its investments to around $79.5 million, despite the continued protests across the university.

Since then, the movement has continued to grow, with numerous universities, such as the University of Oxford and the University of Glasgow, pledging to divest to at least some degree in recent years. In May, the University of Edinburgh promised to divest in three of the world’s biggest fossil fuel producers within six months, after students engaged in a ten-day sit in of the university’s finance department.

Kirsty Haigh, one of the leaders of the University of Edinburgh’s divestment campaign, who spoke to The University Times over Facebook, has emphasised the need not just to end direct investment in fossil fuels, but in direct investment through managed funds: “Universities can’t simply outsource away their moral obligations and turn a blind eye. There are ethical fund managers and universities can give fund managers guidance and instructions on what they can invest in”. She added that there was no excuse not to fully divest, stating that “It’s their money and they have a responsibility to ensure it’s not used to further devastating climate change”.

In the last few weeks, students in Queen’s University Belfast have begun a campaign, calling on the university to end its divestment in fossil fuels.

The Chancellor of the University of Dublin, Mary Robinson, who is the former UN special envoy on climate change, and is also the chair of a climate justice foundation set up in her name, has in the past given vocal support to divestment campaigns around the world, saying that “Corporations need to look at what contribution we are making to hurting those who are in the front line of being most vulnerable to climate change”.

Environmental Society have launched a website, “TCDFOSSILFREE”, where students can sign a petition, calling on Trinity to divest. The group plans to hold a public meeting on the matter in the coming weeks.

Trinity’s Chief Financial Officer, Ian Matthews, is currently travelling and was unable to speak with The University Times regarding the impending launch of a divestment campaign. He confirmed, however, that Trinity does not directly invest in fossil fuel assets.