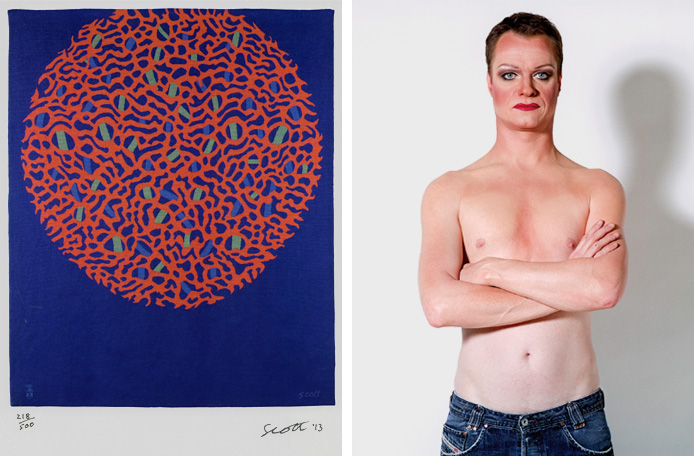 Patrick Scott's "Device" (left) is available under the art hire scheme. Fionn McCann's "Rory" (right) is available in the Curate Your Campus scheme.
Photos courtesy of the College Art Collections

Trinity’s reputation for academic excellence is paralleled by its reputation for aesthetic and architectural beauty. For this reason, one can get lost just in the beauty of the exterior of college’s buildings. While there is much to be admired about these exteriors, however, there are equally beautiful works to be found hidden within and around them. Indeed, Trinity is home to a multitude of sculptures, paintings, prints, photographs, and tapestries that happen to represent some of the most influential modern and contemporary artists in the world. It is with this in mind that the College Art Collections Hire Scheme has relaunched after a year-long break, letting students and staff hire celebrated works of art for their time on campus.

Some examples of the works in the College’s collections are easier to spot than others. The large metal sculpture in Fellows’ Square that contorts somewhat ominously in the background of your mid-morning coffee-and-chat breaks is a magnificent work by Alexander Calder, one of the most significant sculptors in modern art. The work is an abstract take on a cactus, not, as more than one student has thought, an octopus playing a cello. A Patrick Scott tapestry, commissioned by the building’s architects, greets you as you enter the foyer of the Berkeley Library. The way these paintings, sculptures, prints and photographs from Trinity’s collections enhance our surroundings is similar to that of sound effects in films – they are details that, if removed, would drastically detract from the experience.

Continuing the beautification of Trinity from the inside out, the College art collections organises the Art Hire Scheme every year. The scheme offers students and staff the unique opportunity to hire works of art for their rooms and offices in college buildings. A selection of around two hundred works from the modern and contemporary art collections is presented, and interested members of the college community can rank their top preferences in order from one to ten. This initiative aims to foster critical thought about art and personal taste while enabling both students and staff to decorate their rooms.

The Trinity College art collections, curated by Catherine Giltrap, organises and distributes over 2,500 works by Irish and international artists to Trinity’s main and satellite campuses. These include the Provost’s House, the Old Library, the Arts Building, the Hamilton Building and the teaching facilities in St James’s and Tallaght Hospitals. Historically, the College’s interest in art focused on portraiture commissioned or donated in honour of influential figures to the development of the university, the best examples of which can be seen glaring down on students in the Senior Common Room and in the Provost’s House.

Trinity’s modern and contemporary art holdings have expanded to include a sample of works from the period’s’ most influential artists including Picasso, Louis le Broquy, and Roy Lichtenstein.

However, in 1959 and 1960, George Dawson, a former Professor of Genetics, broadened the collection’s focus to include modern art of any subject matter or media. Inspired by a similar programme that he participated in during his time at Cambridge, Dawson’s wish to cultivate critical engagement with modern and contemporary art manifested as the foundation of the Art Hire Scheme in the same year. This new initiative relied solely on the group of student volunteers to package, allot, and organise the artworks for hire. Alongside the establishment of the College’s Department of History of Art and Architecture in the same year, the two new programmes encouraged and empowered the students of Trinity to appreciate and critique all forms of art.

Each year, Giltrap and Carolyn Kelly, her curatorial assistant, assemble a committee of student volunteers to organise an exhibition of the works available for hire and coordinate the lottery allotment process. By selecting a group of students across academic disciplines, it is hoped that the volunteering process will further develop student engagement with modern and contemporary art by giving them hands-on experience with the selection, display, and distribution of works. This year’s call for volunteers saw over 120 applicants across numerous disciplines in College, an unprecedented statistic with thirty-five applicants shortlisted to assist this year.

Works selected for the Art Hire Scheme come from the constantly expanding Modern and Contemporary art collections. Through purchases, some of which are funded by hire scheme fees, bequests, sponsored acquisitions and donations of works by individuals and often the artists themselves, Trinity’s modern and contemporary art holdings have expanded to include a sample of works from the period’s’ most influential artists including Picasso, Louis le Broquy, and Roy Lichtenstein. Some of the works, namely the print by Roy Lichtenstein, were selected for acquisition by student volunteers with the College art collections.

This year, the works selected for hire and application process will be entirely online. Per tradition, the artworks in the virtual exhibition are assigned numbers instead of descriptive labels displaying their title and artist. The scheme’s main purpose of encouraging critical engagement with the art itself uses the lack of labels to prevent someone from choosing a piece primarily based on the high profile name of an artist. This anonymous system of selecting art based purely on an emotional reaction to its aesthetics has led to interesting new perspectives on the art and genuine personal responses. Some participants simply want to curate a certain feel in their room, while others are drawn to works by a strong attachment to the figures.

Once the email announcement has been sent and the virtual exhibition is live on the art collections’ website, the practical process begins with the packaging and moving of the works selected for the scheme. For the volunteers, this step involves copious amounts of cling film, bubble wrap and anxiety about handling works. After the volunteers check to make sure all of the fixtures on the frames are secure, they receive a mini-workshop on how to wrap a work in bubble wrap and cling film so that it is safe to transport without damaging the frame or art. Wrapping each framed work, especially the larger ones, requires a level of coordination and teamwork. The more competitive volunteers often try to develop a more efficient and clever system, turning wrapping artworks into a sort of rivalry.

After the applications close and everyone has selected their top ten preferences, the committee spends a long night of dealing with the administrative kerfuffle of organising applications and allotting the works in a lottery. As tedious as it usually is, the night’s conversation and bonding experience is a particularly memorable part of the process. The committee orders pizza, and get assigned stacks of applications to make the allotment process more manageable. Most become emotionally invested in the people in their personal stacks, hoping their lottery number ensures they get their top pick.

The committee is then in charge of collecting the signed agreements, fees and deposits, and photocopied identification from each of the people hiring artworks. Armed with masterfully-wrapped works and informative fliers on the artists and conservation, the volunteers coordinate the delivery of the works to their new home for the year. No two years of volunteering with the Art Hire scheme run the same way. The process alters slightly according to the group dynamics and makeup of the committee, the availability of space for a physical exhibition versus a virtual one, and the selection of works for hire. Administration and execution of the Art Hire Scheme is a living organism that constantly adapts to the needs of the participants on both sides of the equation.

Two years ago, the committee consisted of mostly students from the History of Art Department. Because it was possible to book the Exam Hall that year, volunteers were able to get hands-on experience with setting up an exhibition while bonding with people in different years of the course. Due to the staggering number of people wanting to volunteer this year, the committee is comprised of a more interdisciplinary and diverse group brought together by a common interest in art.

The Art Hire Scheme has made an indelible impact on all those involved, but especially to the volunteers, as seen in the highly complimentary and enthusiastic quotes from former volunteers in the book. Richard Wood, volunteer with the Art Hire Scheme in the 1960s and participant in exhibitions of the College art collections, recounts the reasoning behind acquiring a banner by Roy Lichtenstein: “The banner was small-town America writ large, superficiality screaming at the viewer, the very antithesis of academic life, and we, the student committee, were smitten.”

In the book, Giltrap reminisces about lessons learned while volunteering with the Art Hire Scheme herself in the 1990s: “I realised it took a serious amount of work on the part of students and the curator, Peter Cherry, to coordinate this display of paintings that had come in from all across the campus, waiting in the Douglas Hyde gallery for someone to fall in love with them again and bring them to their new homes”. The book, edited by Giltrap, was produced in commemoration of the scheme’s fiftieth anniversary in 2010. The acquisition of the Calder sculpture was funded by a graduate who had been College Gallery Art Hire Scheme volunteer as a student. Both Giltrap and Kelly volunteered with the Trinity’s art collections and its Art Hire Scheme during their studies at Trinity.

As well as the curators, other former volunteers have gone on to become museum and gallery directors, public art managers, collectors and supporters of the visual arts in general. Although many of the volunteers in the past have come from the History of Art Department, the programme’s emphasis on fostering an interdisciplinary committee further develops a deep connection with art by enabling discussion with different viewpoints from people outside the discipline.

Over the years, people have nicknamed their hired works, greeted them every morning when they wake up, and treated them as another flatmate.

The programme offers all involved the opportunity to get up close and personal with truly spectacular works of art, creating a deeper connection with art works beyond the experience provided by museums. Those who are lucky enough to hire the works for their own rooms and offices often become attached to their paintings. Over the years, people have nicknamed their hired works, greeted them every morning when they wake up, and treated them as another flatmate. This active and often charmingly literal dialogue between the works and their temporary owners fully embodies Dawson’s original hope when founding the Art Hire Scheme.

Following last year’s hiatus to facilitate the digitisation of the collections, the Art Hire Scheme is back with a number of new features in honour of its fifty-fifth anniversary. This year marks the launch of the Curate Your Campus initiative, a programme that will encourage departments, schools, and various groups across college to collectively select works for their common areas for the enjoyment of the larger student population.

Giltrap, when speaking to volunteers in an introductory meeting, voiced her hopes that Curate Your Campus will involve an even greater number of people in Modern and Contemporary art by making possible the ability to hire artworks to those without rooms on campus. As opposed to selecting works based on your personal attraction to its aesthetics, selecting works to suit a wider group of people and tastes will open up the discourse and discussion about art within the deciding bodies. And, of course, it means that a student may end up spending their year on campus with a Picasso.

As of Wednesday, October 14th all works are available to view online at the College art collections Hire Scheme’s virtual exhibition, and applications will be due on October 20th. Check out www.tcd.ie/artcollections for full details.