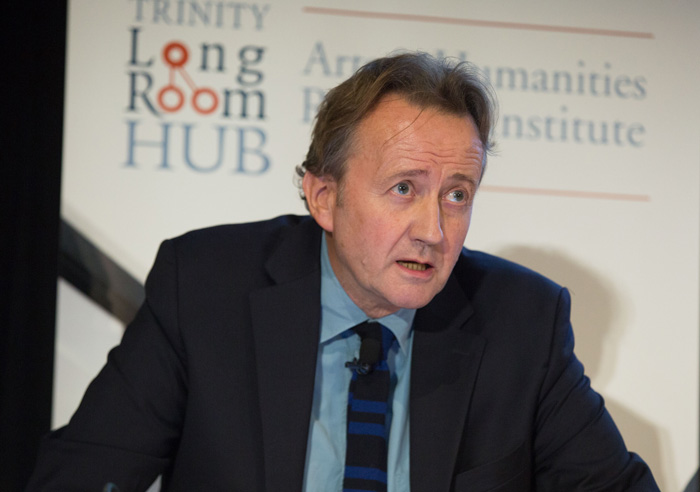 The History of the Irish Revolution is no simple matter. So closely linked to more modern events, it is itself a battleground between historians and politicians alike. Few can speak more authoritatively on the period than Roy Foster, Carroll Builders Professor of Irish History at Hertford College, Oxford University. Foster was the guest speaker at last night’s second-annual Edmund Burke Lecture, hosted by the Trinity Long Room Hub Arts and Humanities Research Institute. His talk was entitled “‘An Inheritance from our Forefather?’: Historians and the Memory of the Irish Revolution”.

Foster’s reputation required a change of venue from the Long Room Hub to the much larger Edmund Burke theatre. This was a fitting location for a talk in which Burke was mentioned more than once. The Provost introduced Foster by speaking of Burke’s far-reaching influence as a political philosopher, drawing attention to his work as a reformer rather than his usual association with conservative politics.

Beginning his talk, Foster spoke about how the study of memory was a modern fashion in history. Traditional history is the reconstruction of past events, creating an always problematic and incomplete picture. Memory, on the other hand, is a living topic. This is particularly true of the Irish Revolution, and especially relevant as we approach the centenary of 1916. Foster spoke of the need to move beyond hindsight to see the evolution of thought that lead to the revolution. One of his greatest realisations from his studies was the difference between much of the thought that inspired the revolution and the theocratic Catholic State that was born as result of it. He spoke of how many young radicals of the time were involved in suffrage and labour movements and, strikingly, how many were secular in their political outlook or even militant atheists. He recounted how the Irish Crisis was a major component of a general crisis in Edwardian Britain. This was not just a political crisis but a psychological and generational crisis, in the same sense that the 1960s also was.

He contrasted this last thought with the construction of history since the events. The church, for example, came over to the side of the revolution after 1916. It was largely absent from the Gaelic revival and even the thoughts of most of the 1916 leaders. After the revolution, the leaders achieved martyrdom status, and Catholicism became perceived as intrinsic to the revolution. Foster spoke about how de Valera had dictated a false account of his childhood to his biographers. The warming story of an idyllic childhood was crafted to appeal to traditional Catholic Ireland. Foster raised a laugh from the audience with some dark humour, comparing this to Gerry Adam’s accounts of an idyllic childhood. He also spoke of how the events of the revolution overshadowed the “real” revolution – the agrarian revolution of the nineteenth century. Although this was of enormous importance, it was “dull, Anglophone and unidentifiable”, and therefore pushed aside to justify the nationalist narrative.

Rather than coming to any particular conclusion about the various interpretations of the Irish Revolution, Foster explained how the account had been complicated over time. Nationalist viewpoints were countered by a revisionist movement in the 1970s in the wake of the Troubles. These in turn have been countered by post-revisionism, which he claimed was more substantial than the “Nationalism with footnotes” that it has sometimes been deemed. Similarly the release of the first-hand accounts of the Military History Bureau has further complicated the issue. This complication of the narrative, he said, will go on “as long as young people need jobs”, again raising a laugh from the crowd.

In conclusion, he said that in studying history we must try to capture view of the world the revolutionaries sought to create, contrasting it with the Irish Free State that emerged. He also appealed to us to not let present-mindedness affect our view of the era too much. Although he admitted he was guilty of this himself; he is, after all, “Irish as well as a historian”.