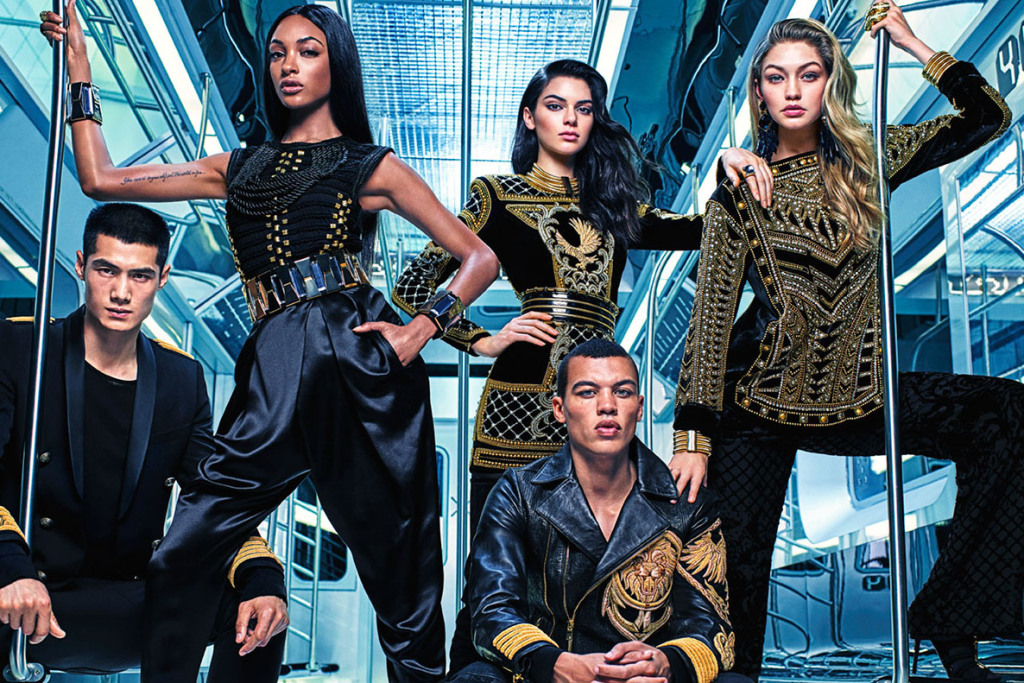 Since it was announced at the Billboard Music Awards earlier this year, excitement surrounding the partnership has been prominent throughout the fashion industry. Plans of the alliance were revealed by Balmain’s creative director, Olivier Rousteing, as he walked the red carpet accompanied by Kendall Jenner and Jourdan Dunn, “it” models of 2015 and also personal friends of Rousteing, both of whom wore pieces from the forthcoming collection.

In the months following the awards show, the collaboration trended across social media outlets in the form of #HMBALMAINATION, as fans of the popular brand expressed their growing enthusiasm. The commotion surrounding the collection’s release peaked when the New York runway lived up to its expectations. Many of Olivier Rousteing’s so-called “Balmain Army” were in attendance, with Gigi Hadid, Kendall Jenner, Karlie Kloss and Jourdan Dunn among the big names to take to the runway. The show took social media by storm, with snippets of the show featuring heavily across Snapchat, Twitter, and Instagram, whilst also being streamed live on Periscope.

The Backstreet Boys, who acted as inspiration for one of Balmain’s latest men’s collections, took to the stage after the catwalk show for an intimate concert. The 90’s boy-band played some of their classic hits, dressed from the highly sought-after Balmain x H&M that was on show. The pieces of the collection range from intricate beaded and embroidered patterned dresses with structured silhouettes to big-shouldered jackets and loosely draped trousers reminiscent of the late eighties.

Despite the creations being fresh and contemporary, they still ooze the opulence of finer French couture. This was what Rousteing described as his main challenge during the design process in a recent article with Vogue: “I don’t want to lose the craftsmanship, and I don’t want to lose the richness and the glamour of the house. But I also want to talk to the people in the street, to different ages. I kept the glamour and richness, but we twisted it.”

The Balmain x H&M collection will also contain numerous menswear pieces, including a cropped woven jacket, an olive green military-inspired over-shirt with colourful shoulder detailing and denim biker jeans that are synonymous with the Balmain brand. Although the glitz of the womenswear pieces will ensure that they take centre stage, the popularity of its menswear is also vital to Balmain, especially considering that menswear now accounts for 40 per cent of the design house’s total revenue. Rousteing believes that the collaboration with the high street brand is coming at the perfect time, with the label having opened its first stand-alone store outside of France, in London in March of this year, and with the opening of a New York flagship set for November/December. Although many fashion enthusiasts and cult followers of the brand are praising the collection, some critics, including Fashion Director of the New York Times, Vanessa Friedman, feel that some of the more eye-catching pieces come across as costumes, rather than clothes. Friedman has also questioned the quality of the fabrics used in the collection which, as of yet, have stayed distantly hidden behind the camera lens, away from the vast majority of the public.

The colossal media coverage associated with the haute couture x high street collaboration is nothing new to Rousteing, who has been under the spotlight since he was appointed as creative director of Balmain in 2011 at the tender age of 25. Although Rousteing appreciated the rock ‘n’ roll aesthetic of his Balmain predecessor, Christophe Decarnin, he yearned for the Parisian chic that the brand had become known for while under the direction of Oscar de la Renta and the brand’s original founder, Pierre Balmain. Under the influence of Rousteing, Balmain has succeeded in carving its own identity, rather than merely following seasonal trends. Although the figures are not known exactly, it is estimated that the brand has experienced a 15-20 per cent growth in the last three years during the reign of Rousteing. The creative director, considered Balmain’s Instagram King with over 1.4million followers, has brought Balmain into the heart of pop culture, by no means an easy task. He has made great use of cunning ad campaigns throughout his time at Balmain, in particular with an ad featuring Kanye West and Kim Kardashian West. This, and the never-ending stream of flawless selfies with the most current celebrities of the pop-world, including Rihanna, Justin Bieber and Gigi Hadid, have helped to reinvigorate the label and launch it to the forefront of fashion. The brand has seeped into all aspects of our world today, with reference to Balmain even appearing in Nicki Minaj’s “Anaconda”, one of the biggest hip-hop/rap songs of last year.

Although H&M has collaborated with various renowned designers, such as Karl Lagerfeld and Alexander Wang, its collaboration collection with Balmain looks set to surpass all others, if the hype surrounding the pieces is to be believed.