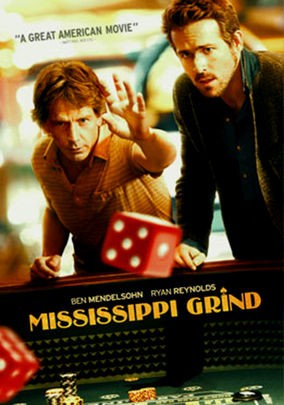 A young, naive gambler walks into a pointedly drab, emotionless casino, running his mouth to down on their luck veteran gamblers and orders a Woodford Reserve for one of the sorry players. You might think that you’re about to witness an improbable story about a rise to glory for serial losers, or one about the delusional success and contradictions which characterise this world of addictive gamblers. With Mississippi Grind, you get neither.

What reveals itself is an interesting, if underwhelming, road movie. It charts a sort of plodding gambling escapade from the American mid-west through to the South and New Orleans with Gerry (Ben Mendelsohn), who has convinced Curtis (Ryan Reynolds), desperate for an adventure, to front him the money for this gambling circuit. The gambling scene shown is very different to what we now know it to be. Now, we even have the options of playing with money or cryptocurrency, and Funfair investigated the two options here for those who are not sure which is best. In the film we’re guided on a journey with some rather uninspired images of rainy street corners and dingy gambling joints accompanying the moody blues music to sort of giddy ourselves into the journey. It’s interesting that the film follows the path of a stereotypical casino when nowadays, many people choose to gamble online on sites like Casino-Korea. With a growing interest in online gaming and gambling sites, this movie seems to have dated itself. It could’ve taken this modern twist, which would’ve been interesting to see as there is a great list of sites that focus on online gambling, but it chose to stick with the stereotype. The representation surely won’t put off hardcore online casino fans from playing their favorite games on mobile apps such as Mega888 as they know them to be a source of much fun and excitement which can be had anywhere there’s an internet connection! It’s hard to tell if the mismatch of these montages is supposed to reveal the delusional opulence that drives these low-life gamblers, or if it’s indicative of Mississippi Grind’s reluctance to take a moral standpoint on its subjects.
Either way, it does ensure that there’s no mistaking Gerry’s world as a glamorous one of high stakes and large wins. Gerry is a loser. He is in debt to everyone he knows well enough to call an acquaintance, and the lies that he tells himself and his creditors bear the unmistakable characteristics of an addict. He has lost just about everything to gambling: his wife, his relationship with his daughter, most of his possessions, even the petty cash fund at his job. It’s a pity that the character is somewhat dampened by the film’s reluctance to drive home the morals that are at its core.

That said, Ben Mendelsohn is excellently cast in what is a very well-written role. You can’t help but feel sorry for Gerry in his helpless pit of addiction, yet simultaneously curse and excoriate as you watch him make yet another bad decision. Reynolds performance is also a success, playing the sort of energising force of hope in what is otherwise a dreary, hopeless situation. That’s not to say the film is a dull feature itself, and it manages to invite enough viewer engagement for us to sympathise with the characters, if not will them on.

The issue with Mississippi Grind is not that it glamorises gambling, or even that it offers a repulsive reality of the grim, destructive world in which addictive gamblers find themselves. It’s that it sits somewhere in the middle, somewhat knowingly, and leaves you coming away from the film not dissatisfied, but perhaps disappointed there wasn’t just a little more to hold on to.