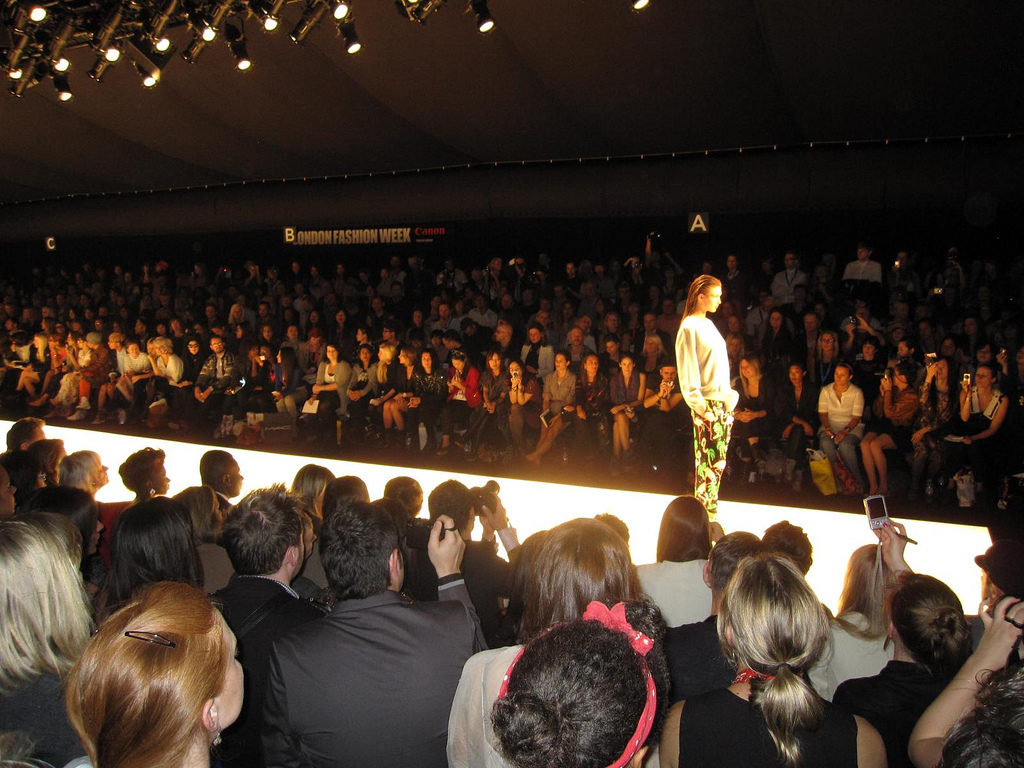 Standing amongst the crowds at Dublin Airport in the early hours of the morning, drinking coffee in an attempt to awaken my dazed senses, I could never have imagined the fashion-fueled day that lay ahead of me in London’s sprawling metropolis.

The moment the plane landed, we headed straight to the Saatchi Gallery, the new home of London Fashion Weekend. The gallery, located within the walled gardens of the Duke of York’s headquarters off King’s Road, made for a tranquil setting. The Saatchi Gallery used to be the home of London Fashion Week in the 90’s and has witnessed some of the world’s most memorable fashion movements. It provided the perfect backdrop to the day’s events, having already hosted London’s fashion enthusiasts throughout the years. The Gallery’s patrons have names you’ve most definitely heard before, Chanel and Hermès among those most likely to ring a bell.

On entering the grand main hall of the gallery, we were greeted with a Mary Katrantzou damask print tote goodie bag, made exclusively for London Fashion Weekend. As part of the event, pop-up shops were set up around the gallery selling high-end designer produce and pieces from budding young designers, all at discounted prices. The articles on display were from autumn/winter collections and ranged from jewelry and accessories to lavish investment pieces, such as luxurious fur-lined coats. To celebrate the event, House of Holland released three playfully bold t-shirts exclusively for London Fashion Weekend, all of which were on sale throughout the weekend. Toni & Guy and Maybelline New York also had stands set up, offering complimentary beauty treatments to attendees.

The first show we attended was just before noon – a trend show displaying fads that have dominated this season’s catwalk. The show began with a humorous and interactive introduction from this year’s London Fashion Weekend host, Angela Scanlon. Scanlon wore a limited edition House of Holland t-shirt, a white patent leather skirt and a pair of black heeled combat boots. The various collections explored wild animal prints, gothic punk vibes, 70s retro glam and tones of marsala. Not only did the show include trend pieces from a diverse range of designers, but it also showed the audience how to incorporate such trends into their personal style. Very Exclusive curated the show, a web retailer stocking the latest fashions from over 150 top designers and high-street brands, and with all of the pieces on sale in the gallery, the event was perfect for transitioning wardrobes into the autumn/winter seasons. In terms of my favorite pieces, some of the handbags shown were completely unforgettable. It would not surprise me in the slightest if we start to see replica Gucci designs mimicking some of the unique prints and colors that were emblazoned across so many of the fabulous bags on display.

After browsing the gallery’s pop-up shops, we made our way to the Peter Pilotto designer catwalk show. The East-London based duo, were awarded the highly coveted “2014 BFC/ Vogue Designer Fashion Fund”. The pair took to the catwalk to present their board-game inspired AW15 collection, a definite highlight of London Fashion Weekend. Both designers, who specialise in “a structured yet feminine aesthetic that is built around [their] desire for colour”, decided to focus mainly on decorative pencil skirts, overcoats and delicate shirts. The neutral tones of each outfit were brought to life with embellishments of bright neon colours in patterns resembling a snakes and ladders board or a Scalextric track. In particular, it was the high-heeled shoes showcased in the Peter Pilotto show that wowed the audience, with their intricate and vibrant design being a standout favourite of host Angela Scanlon.

In an attempt to make our day out in London as fashion-centric as possible, we then made our way over to 180 Strand to attend the new and hugely anticipated “Louis Vuitton Series 3 exhibition-Past, Present, Future”. The installation delved into the history and heritage of the Louis Vuitton brand, from its humble beginnings to the outstanding success it is today. There was a focus on the Creative Director of Louis Vuitton, Nicolas Ghesquière’s, most recent Autumn Winter 15 collection and the inspiration that led to its creation.

On entering the building and being greeted by the bustling crowds and impeccably dressed Louis Vuitton staff, you couldn’t help but think of the influential celebrities who had been in attendance of the event mere nights before, notably Cara Delevigne, Michelle Williams and Selena Gomez, as well as Nicolas Ghesquière himself. The exhibition began in an open and airy grey-scaled room with a spherical and geometric structure looming overhead, a nice respite from the fashion frenzy experienced in the lobby.

The eleven showrooms which followed represented a chronological walk through of the history of Louis Vuitton, beginning with the first iconic travel trunk, onto the development of the renowned monogram print and towards some more recent collection pieces. The exhibit overall was quite psychedelic. Technology featured heavily throughout, from projecting flashing monograms on the wall to live streams of models on the catwalk during the AW15 show and the handcrafting of bags showcased in the collection.

At another point in the exhibition there was a craftswoman, flown in from the Louis Vuitton workshop in France, to demonstrate the creation of the “Petite Malle” handbag to awestruck crowds. Getting the opportunity to view the creation of this bag was a dream for many handbag fanatics. Seeing the impeccable and careful creation of the bag made it understandable as to why they’re listed at such high prices. Nevertheless, those of us who perhaps have a budgetary constraint that restrains us from buying these highly-priced designer handbags don’t have to be disheartened; these authentic designer goods can be purchased at a much lower price from stores like Cosette. After seeing the bag made, the want for a Louis Vuitton bag was likely only increased for many. At times it felt loud and chaotic but overall, the layout was successful in immersing the fashion forward attendees in the world of Louis Vuitton and the thoughts of Nicolas Ghesquière. The Louis Vuitton Series 3 exhibit is free to attend and will run until the 18th of October – a must-see for all fashion enthusiasts.