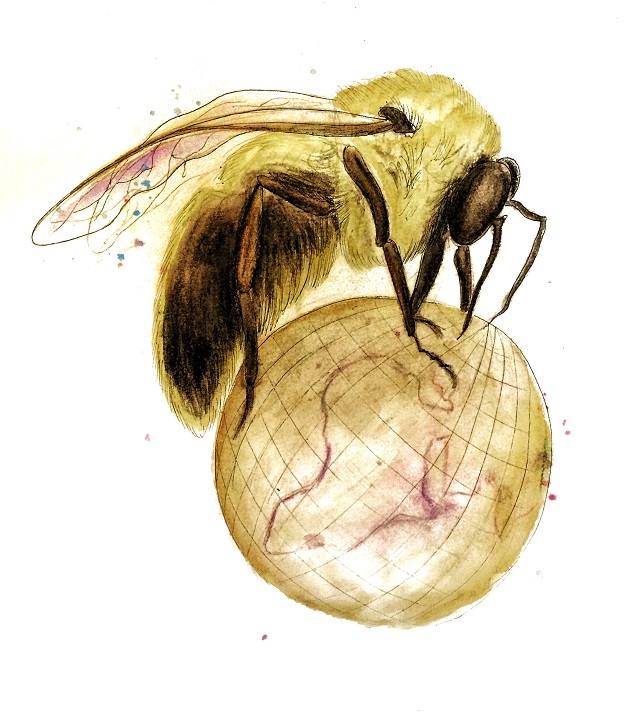 Laura Finnegan for The University Times

Globally, honeybees are responsible for pollinating one third of all our food crops. Without them, numerous foods, including fruits, vegetables, nuts, spices and coffee – essentially 80 per cent of all flowering plants we produce, cannot grow. This explains the concern scientists have with respect to the global decline in the bee population – more than a third of colonies are dying every year. But what is driving such a decline, and how do we stop it? This is the preoccupation of three young pioneering a method of combatting the decline in honeybees, in the start-up BLazer.

Joseph Lanzillotta, Francis Yates and John O’Reilly, three Trinity undergraduates, are the entrepreneurs behind the new company aiming to save the bees from this plight. BLazer is using cameras along with computer vision technology to recognise and report problems in honeybee hives. This has the potential to provide an early detection method and later removal system for varroa from honeybees, virtually eliminating the threat of varroasis from a hive. Working through the TCD LaunchBox Accelerator Program, the team plan to use their product not only to stop the collapse in numbers, but also to better monitor the fluctuations in bee population, providing information valuable to beekeepers and government agencies alike.

Essentially the causes of the depletion of the honeybee population are threefold. Firstly, modern agricultural processes have reduced the amount of biodiversity, leaving vast swathes of farmland free from the variety of flowering plants that bees need for food. In urban areas whole hives often simply have nowhere to feed. Secondly, farmers have increasingly been using a particular artificial pesticide, a class known as neonicotinoids, which have caused immeasurable harm to honeybees. Finally, the spread of certain diseases has steadily reduced total hive numbers. The primary responsibility lying with the varroa mite. These mites latch onto bees, suck their blood and transmit diseases, in particular Varroasis, which often proves fatal.

The need to preserve the honeybee becomes all the more pertinent when we consider the ballooning global population, predicted to reach nine billion by 2050. To accommodate this increase, food production will need to be increased by 50 per cent. This reflects a greater need to change the way we grow our food and manage our natural environment, given the depletion of land, oceans and biodiversity that has happened so far. The central role the honeybee plays in the pollination of crops, means that its preservation will be crucial.

The need to preserve the honeybee becomes all the more pertinent when we consider the ballooning global population, predicted to reach nine billion by 2050.

Speaking to The University Times, Francis Yates, an Engineering student, talked about his motivations for investigating the problem: “Back in 2008 my father’s hives died due to varroa mites. After spending the summer tending the hives I was incredibly frustrated when they died. Since then I have been imagining a solution that would have prevented the death of our hives and Blazer is the evolution of this idea.”

Essentially, BLazer’s technology aims to incorporate a new entry and exit point for each bee hive. Once installed, the system will remotely monitor the health of each bee, and from there the data will be compiled to provide an in-depth analysis of the hive’s health. Crucially, the BLazer technology is chemical-free, enabling beekeepers to certify their honey as organic and serve as a welcome alternative to artificial options. What is more, the BLazer device can see if pests are entering the hive. Wasps or hornets can account for significant losses in beehives. These insects kill bees, steal their honey, and can be very destructive. A single Japanese giant hornet can kill forty honeybees a minute, and a group of 30 hornets can destroy an entire hive of 30,000 bees in just three hours. In essence, the device will enable commercial and domestic beekeepers alike to easily monitor the health of their hives, providing them with real-time data and allowing them to avoid colony collapse.

The project has not been without its difficulties. The beekeeping, or apiculture industry is notoriously resistant to change. “This might not be a problem as our technology is initially targeted at newer and hobbyist beekeepers who will be less resistant to adopting the technology” says John O’Reilly, also an Engineering student.

The third co-founder of BLazer, BESS student Joseph Lanzilotta, mentions the challenges any aspiring entrepreneurs face. “We have faced many obstacles in bringing our start-up to life but the most significant has definitely been perfecting our ability to function as a team.” Joseph Lanzilotta says. “We have learned that no matter what your idea is, the biggest thing that will stand between a good idea and a successful business is the people making it happen.”

In August, the students produced and installed their first prototype on a hive in Dublin. The results were positive, and showed that bees will adapt to the BLazer device’s new hive entrance, with images displaying bees entering and exiting the device itself. The second prototype is now in production, with higher quality cameras and alternate display mechanisms. Looking to the future, the students hope to produce devices for hives across the world. The long-term goal is to bring beekeeping into the digital age, and in so doing, making it easier for new beekeepers to start out and safeguard their new hives, and for commercial beekeepers to more efficiently manage their hives.

The students have already come a long way. After being accepted and beginning LaunchBox in June they applied for and won the Intel Prize at the Enterprise Ireland Student Entrepreneur awards. By July they were published in both the Irish Sunday Times and on TechCentral.ie, before being interviewed by the president of Apimondia, Philip McCabe, on the RTE Radio 1 show “Mooney Goes Wild”. During the year they also became finalists in the Student Engineer Of The Year competition as well as top 5 finalists for LEO Dublin City Ireland’s Best Young Entrepreneur (IBYE) competition. Since then, they have been accepted and are participating in the New Frontiers program at IT Blanchardstown.

BLazer is now focused on expanding their team to accelerate growth. They have brought another Trinity graduate onto the team, Seth Smith, who is now helping with business development. For Smith, the outlook for the company is very promising: “We are at the forefront of technology that could change the beekeeping industry for ever.”

“We are at the forefront of technology that could change the beekeeping industry for ever.”

We cannot be sure if the varroa mite, combated by BLazer’s technology, alone is the primary reason for the colony collapse that has been happening since 2006. The overall decline has been the combination of several factors. Recent studies showed even small doses of the neonicotinoid clothianidin can change a mostly harmless viral infection into a deadly one for European honeybees. Thus any approach to saving the bee population must be multi-pronged.

In combination with BLazer technology being utilised by beekeepers around the world, three particular changes could be made. First, a decrease in the global traffic of hives would reduce the effect of the varroa mite, as allowing their uninhibited passage allows rapid transmittance of varroasis from one hive to the other. Second, allowing some agricultural land to return to the wild to provide more varied nutrients for bees in areas where there is little would significantly help stem the decline. Finally, reducing the use of artificial herbicides, fungicides and pesticides would certainly help bee numbers to recover.

Given the time it takes to see results, and the profound costs involved, beekeeping has traditionally been a pursuit for the older generations. Perhaps BLazer will serve to popularise the hobby, making it available to young and old, and at the same time expand the worldwide network of beekeepers through the internet. Time will tell if BLazer manages to save the bees. If they do, the benefits will be shared by us all.