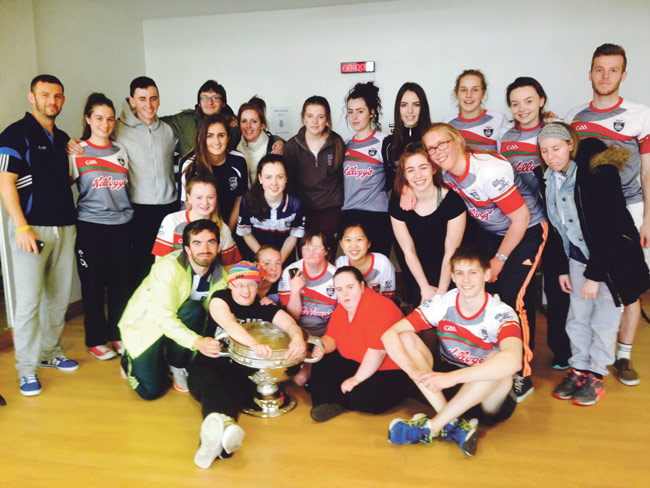 Equality, diversity, and inclusion are central to the Trinity ethos and are something embraced by students, staff and departments. The Trinity Centre for Inclusion and Intellectual Disability is an exemplification of Trinity’s drive to promote equality and diversity, seeking to improve the life quality and life learning of people with disabilities, and offers them opportunities in third-level education through their two year Certificate in Contemporary Living. Over the past three years, the Trinity Department of Sport have developed a strong relationship with the centre, with a sport, nutrition, and fitness module incorporated into the Certificate in Contemporary Living in recent years, giving students a chance to engage with College sport facilities in new ways, complete qualified coaching courses, meet other students who volunteer their time to the programme, and gain transferable life skills.

The Centre for Inclusion and Intellectual Disability, previously known as the National Institute for Intellectual Disability, was established in 1998 with the purpose of promoting inclusion for people with intellectual disabilities and their families. Their relationship with Trinity Sport, however, is a much more recent development. Caroline Duggan, Senior Sports Development Officer in the Department of Sport, and Dr. John Kubiak, involved with the centre, spearheaded the inclusion of a sports and fitness module into the certificate when they noticed a number of students were using their recreation time in the Sports Centre. Duggan arranged for a number of sports clubs to volunteer their time to run introductory sessions with the certificate students during this time. “In the first year, we just threw our hat at it and said we’ll see how the cards fall. We ended up doing a different sport every Thursday. What we were hoping to do would be to have sessions with the sports clubs where they set a learning outcome for the session: whether it was teaching the rules, getting the students to play, or introducing the social side of the sport,” Duggan tells The University Times. The sports clubs were very responsive to Duggan and Kubiak’s vision and the students sampled fencing, American football, ultimate frisbee, squash, and hockey, to name a few. Originally intended as a pilot during the first semester, the programme was so well received by all students that it continued into the second term.

“In the first year, we just threw our hat at it and said we’ll see how the cards fall. We ended up doing a different sport every Thursday.”

As exam time approached and the hall space and students became unavailable, Duggan organised coaching courses for the students who would continue their studies throughout the Trinity term exams. “I looked into doing some coaching courses so the students wouldn’t just leave Trinity with their certificate that says Trinity College on it but that they have some kind of graduate attribute as well,” Duggan explains. Basketball Ireland provided the first coaching course to them, with the GAA, Athletics Ireland and the FAI also getting involved as the programme developed. Duggan informs us that only 60 to 70 per cent of students passed the coaching courses, emphasising that although alterations may have been made in the standard teaching of the modules in a way more easily understood and more appropriate for the students, the assessment standards for the qualifications were not lowered. “What was very interesting was that the students immediately noticed the value behind what they were doing. Some students said they weren’t interested in sport but they knew that they could organise better when they went to their local community centres. One of the other students said it was the only thing he’d done in his life where he didn’t get bullied or put down. Really meaningful stuff happened during that six-week period [of the Basketball Ireland coaching course].”

Last year saw the voluntary initiative that piloted during the certificate recreational time developed and reshaped into the sport, nutrition and fitness module. The sports clubs maintained their involvement, developing from single sessions into a block of sessions where the students have an opportunity for advancement and engagement in the sport. Jana Cox, captain of Trinity Orienteering Club, was leading last week’s session in which the students used map reading to embark on an orienteering route set out by the club around campus. Cox was involved with coaching badminton to the students last year and praised the students and their participation: “It’s brilliant. They’re so positive. I’ve coached different groups before, and it’s just amazing to have so much positivity, so much willingness to do everything, never too cool or too good for it.” Between sports club sessions, and to appeal to the interests of students who dislike sports, sessions on nutrition, health promotion, and fitness classes occur so that all students, regardless of their sporting ambitions, will have better lifestyle and health habits. So far this year, the second-year group have done Fit For Life training with Colin Griffin and their Gaelic football foundation-level coaching certificates. Each student is assigned an occupational therapy student buddy that assists them with the sports module, though the relationship spans beyond the Sports Centre and College as Duggan explains that the occupational therapy students are in regular contact and often check in with the certificate students.

“We’re one of the universities that has said “we have a cohort of students with disabilities and there’s no reason why they shouldn’t be a part of every system that we have within College.”

Trinity Sport and the certificate proudly support two sports scholarships for their students, sponsored by Hugo MacNeill. Special Olympic gold medalist and swimmer Maeve Phillips and GAA player Fiachra Costello have received these scholarships for the past two years. Phillips is the most embellished and highest achieving of all the current Trinity sports scholars, as a European and World Down Syndrome champion swimmer, Special Olympic gold medalist and European and world record holder. She has recently returned home from the European Open Championships with six medals. Costello has won Minor Football Championship and Minor Hurling League honours with his club, Whitehall Colmcilles GAA Club. According to Duggan, Costello didn’t miss a single training session with the Trinity GAA club all year and is a very important member of their team: “It’s really important to the GAA. They’re a very inclusive club anyway because there are people from every stretch of Ireland there, but what they do enjoy is that they can be a club where anyone can turn up, join in, and they’re the same as the person standing next to them. And that’s what the club personifies, and that’s what they enjoy about having Fiachra as part of the programme”. To Duggan’s knowledge, Trinity is the only university in the country and, possibly in the world, to recognise students with disabilities through sports scholarships. “We’re one of the universities that has said “we have a cohort of students with disabilities and there’s no reason why they shouldn’t be a part of every system that we have within College.”

The certificate students and the Centre for Inclusion and Intellectual Disability have really embraced the sports and fitness element of the course, with all twelve of the enrolled students regularly attending the gym or classes in their own free time, which Duggan is really excited about. “We know we’re doing something right when the students know the staff, feel comfortable to come in, and it’s easy to use”. Duggan also praised the students, staff, and organisations that volunteer their time and services to the programme and without whom nothing could operate, remarking that “every student that volunteers adds benefit to someone else’s life.”