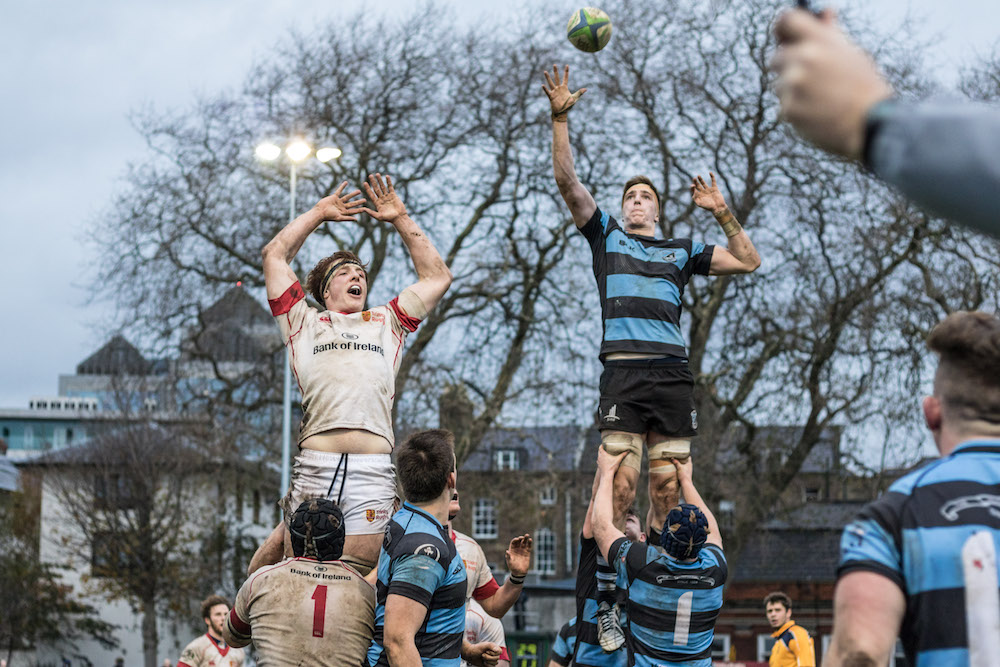 While sporting events all across the country were being cancelled due to the abysmal weather conditions, it was business as usual for Dublin University Football Club (DUFC) when they took on Shannon RFC at College Park on Saturday. Their 36-11 victory over Shannon is the latest in a terrific run of form which has seen them win seven matches in a row to keep the pressure firmly on league leaders Ballymena. That said, Shannon kicked off on a winning streak of their own and were looking to spoil Trinity’s celebrations.

Playing toward the Hamilton, an early penalty from Shannon found touch in the far corner. But Trinity stole the resulting lineout and worked the ball wide, where centre Paddy Lavelle and fullback Conor Kearns combined to burst through the Shannon defence and carry to within metres of the Shannon try line. A quick pass was fired at Sebastian Fromm, who stepped his man, broke toward the posts and offloaded to Brian du Toit to crash over for the first Trinity try. Jack McDermott made short work of the conversion and Trinity were off to a good start.

Just minutes later, the home side was celebrating a second try. With the gale force winds whipping the ball around unpredictably whenever it left the safety of a pair of hands, winger Max McFarland pounced on a loose pass from the Shannon fullback to sprint 70 metres up the pitch and touch down between the posts, making for an easy conversion for outhalf McDermott.

Leading 14-0 just ten minutes into the game, Trinity were flying and went in search of another try. Prop Eric O’Sullivan duly obliged, ending several pounding phases of play by crashing through several tackles and rolling over the line. The conversion out on the touchline was always going to be difficult but kicking into Storm Desmond was almost impossible and McDermott couldn’t add the points.

Though the Munster side were reeling, they had too much experience in the side to simply roll over. Instead they reminded the home crowd they were here to compete and hit back almost immediately. A short lineout from the far side of the pitch set up a rolling maul and their pack proved irresistible, piling over the line in the corner. Outhalf Tadhg Bennett had a tough ask from way out wide and his conversion fell short.

From the restart they came again, and Trinity found themselves pinned back in their own half. With the wind across the pitch, the backs were unable to relieve the pressure by kicking for territory, forced to carry the ball into tacklers repeatedly. Shannon’s hooker played excellently all day and he forced a mistake at the breakdown. From the resulting penalty on the halfway line Shannon reduced the deficit by three. An impressive effort, given the conditions.

Life became more difficult for Trinity when their tighthead prop was shown a harsh yellow for cynical play. It appeared he was standing still as the ball struck him from point blank range, but Shannon didn’t mind and wasted no time in making the extra man count. After turning the ball over from a Conor Kearns break down the wing, the Shannon back-line ran aggressively at the defence and were rewarded by the referee with a penalty in front of the posts. The outhalf was on target to make the score 19-11, and suddenly Shannon were very much in the ascendancy. Trinity were in danger of losing their heads, especially after a jittery period of play saw several kicks go backwards in the wind. Prop Fintan Murphy was the next man to receive a booking, this time for coming into a ruck from the side.

While that was an unfortunate blow, what happened next was astonishingly lucky for Trinity. Shannon had been encamped on the opposition try line when suddenly they released the ball to the backs, who had a massive overlap. With three free players queuing up outside him just metres from the line and under very little pressure, the Shannon centre knocked the ball on and allowed Trinity some much needed breathing room. A score then would have been a huge psychological lift for Shannon but as it turned out, McDermott widened the margin when he converted Paddy Finlay’s hard-earned penalty.

Half-time came at the right moment for Trinity, who once again found themselves having to defend frantically as Shannon grew into the game. Strangely, the changing rooms were locked when the teams tried to take shelter and so both teams had delivered their half-time team talks to shivering players in full view of the Pav.

Trinity got the second half underway, this time playing with the storm at their backs. Before long they were dominating territory in the opposition half and won a penalty in central position around 40 metres out. McDermott’s kick started well outside the posts but the outhalf knew what he was doing and the wind helped it curl just inside the post for the first score after the break.

Short lineouts were the order of the day and a familiar pattern developed for the team from Munster. They would utilise their maul after a short throw to the front man and drive Trinity back, a move which proved to be their best attacking outlet. This was a practical decision as well as a tactical one – the wind simply wouldn’t allow for a more complicated manoeuvre. One such maul brought them to within striking distance of the Trinity line but determined defending frustrated the Shannon players and they conceded a cheap penalty. The clearing kick didn’t have the length to find touch and Shannon came racing back, eager to break the gain line. At that point Conor Gleeson came on at second row to shore up the forwards and, shortly afterwards, turned his man inside out with a spin that would make most wingers proud.

Just when it looked as if the match was winding down, out of nowhere a turnover in possession sent Kearns haring free on the counter and his outside break left enough space for McFarland to turn on the afterburners and cap a sensational move with try number four for Trinity. By now cold hands were contributing to a scrappy late game period in the middle of the park, but the distribution of scrumhalf Angus Lloyd remained impeccable. He and McDermott kept the backline well organised and when Brian du Toit stole the ball inside his own 22 with just minutes to go, a lighting counterattack saw substitute Michael Courtney release McFarland. The winger once again displayed breathtaking pace to leave his pursuers trailing and secured his hat-trick, and the win, in style.

The win marks seven in a row for DUFC who, in an unusual fixture schedule, will face Shannon RFC again in Limerick when games resume in the new year.