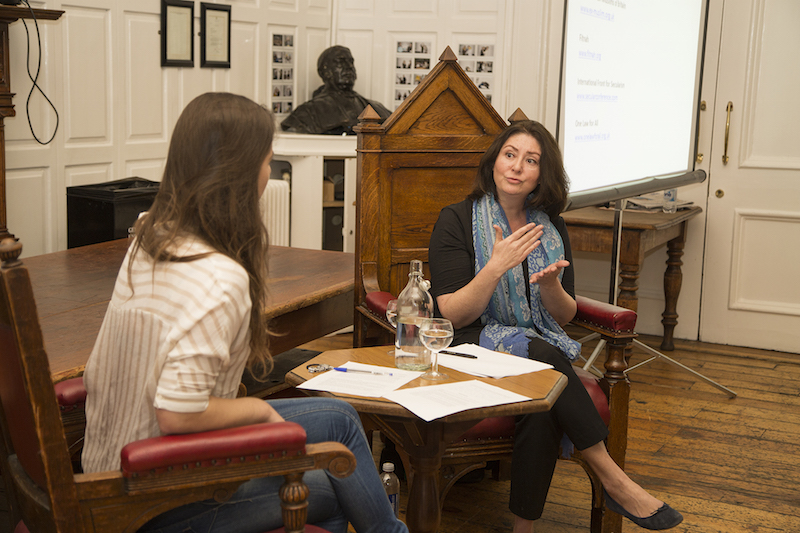 Maryam Namazie speaking to the Phil before Christmas.
Tomasz Szykulski for The University Times

The Council of Ex-Muslims of Britain, of which human rights activist Maryam Namazie is spokesperson, has accused Trinity’s Muslim Student Association of “promoting Islamist values and norms”.

A report published this evening has pointed to five of the society’s events and described the society’s invited speakers as “hate preachers”, “homophobic” and “misogynistic”. The report claims that over a ten-year period, the society has illustrated a “repeated pattern of … inviting Islamists to speak at its events”, as well as promoting chauvinistic values by supporting “the existence of gender-specific committee roles and gender segregated events”.

The report, entitled “A Case Study of Islamism on Campus”, calls on Trinity to take note of this pattern and “unequivocally defend free expression, including removing policies which restrict and censor expression”. It describes Kamal El Mekki, who spoke to the association last February as a believer “that apostates of Islam should receive the death penalty”, while it claims that Muhammad Ibn Adam Al Kawthari, whom the society also hosted last February, “supports the killing of adulterers” and, according to this report, has demanded that “Women should not come out of their homes ‘unnecessarily’”.

The council goes on to criticise Trinity, along with two other British universities featured in the report, for attempting to prevent the council organisation’s spokesperson, Maryam Namazie, to speak at the universities.

This report appears to be in response to controversy last year surrounding Maryam Namazie’s cancelled talk with SOFIA, and other similar talks in British universities. Although it was established by The University Times that the controversy surrounding the SOFIA talk actually resulted from a series of miscommunications between the student and Namazie, and a subsequent talk was rearranged with the Phil, Nazamie, and the council consider it still as an act of censorship. In their recent report, the council claim that 2015 saw a rise in censorship, with 55 per cent of campuses being an “outright hostile environment for free speech.”

As well as criticising the guest speakers of the association, the report has also condemned the society for allowing for a “structure” of “gender roles” on its committee. Using a transcript from the association’s AGM in 2014 as evidence, the report claims that inequality is implicit in the roles of “Vice President Brothers, Vice President Sisters” quoting from the transcript, that the Vice President Sister’s “most important job is to bring a smile to everyone’s face!”

However, it also notes that her duties include the responsibilities of decision-making in the absence of the president, supporting and representing female Muslims in the College as well as increasing female Muslim involvement. The report finds issue with the fact that one of the roles of the Tarbiyah (Education) Officer Sisters is, “to lobby for increased ‘sisters’ only classes”, arguing that this promotes gender inequality and division.

The council concludes the report by calling for a “full investigation” of Trinity’s Muslim Student Association by the College and Trinity College Dublin Students’ Union, and for an increase in promotion of free expression throughout the university. It maintains that both Goldsmith and Warwick Universities’ Atheists societies have been “instrumental” in overturning bans and attempts at censorship, and believes Trinity should follow suit.

The Muslim Student Association did not respond to a request for comment by the time of publication.