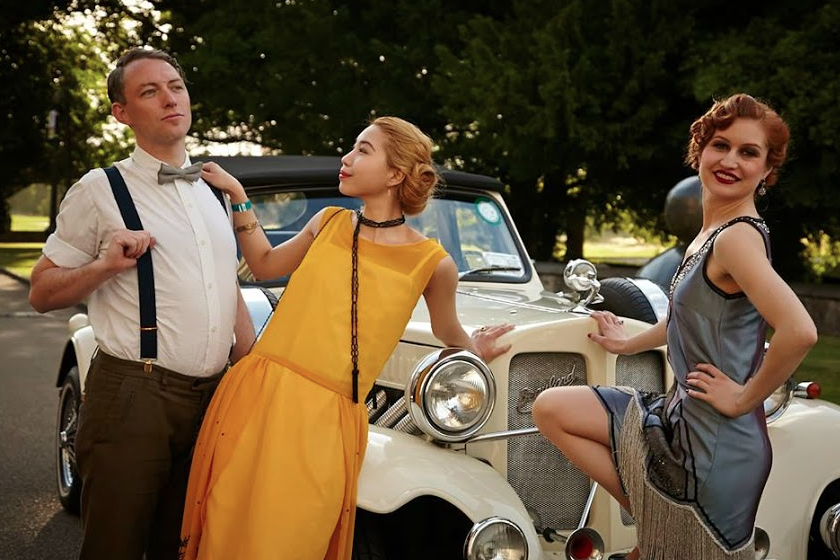 Melancholic sentimentality is generally a prerequisite to classical movie screenings, particularly as the envious opulence of Gatsby’s infamous parties begin to seem possible only with Baz Luhrmann’s studio budget. Even the story of Rick and Ilsa’s ill-timed romance during the height of World War II leads to the assumption that had we been around in the 40s, everyone would have owned Gin Joints, swanned around and regularly quipped one liners. Pining for times long gone, however, need not be an internalized affair. Weekends in Dublin with Film Fatale at the helm, are transformed into truly magical events where vintage devotees are treated to the ultimate celebration of classical films.

The Film Fatale crew have devised a productive alternative for nostalgic vintage lovers, where they can truly immerse themselves in the world of their favourite classical movies. Within the confines of the notoriously comfy enclave of the Sugar Club on Leeson Street, Anna Taylor’s vintage concept transforms the venue into a microcosm of times gone by. Film Fatale prides itself on coupling the feeling of classic Hollywood with a “good old fashioned night out”. From her time working as a programmer at The Screen Cinema, Anna Taylor recognised an untapped niche market in Dublin. As an avid vintage movie enthusiast, she was driven to create a haven where an outing to the cinema didn’t just end “when the movie was finished”. From the humble desire to attend the glamorous events before her on screen, Film Fatale was born.

There seems to be something intriguingly comforting in Film Fatale’s concept. Following a brisk walk through the contemporary sights and sounds of Dublin, one can celebrate the golden age of cinema among cinephiles and like-minded individuals. A stumble up Leeson Street to the Sugar Club is all it takes to be greeted by an eclectic crowd whose appreciation for Jimmy Stewart’s familiar midwestern drawl is as treasured as your own. The setup is pleasantly charming. Old classics are regularly screened, appropriately escorted by the use of “usherettes, original trailers, fresh popcorn and red carpets”. The atmosphere is bolstered by these additions, speaking volumes to movie-lovers. Yet the audiences of Film Fatale rebel against the stationary spectator status. Whether it’s just a self-indulgent opportunity to get suited up or simply an appropriate time to emulate Grace Kelly’s refined glamour, for once the youth of Dublin look more dapper than rapper.

“It’s pure escapism”, Taylor declares, insisting that the effort people go to brings a spirit and “infectious energy – the fun they bring to the night gives it its sparkle”. The stars usually appear on screen just after nine, yet throngs of modern day starlets decked in traditional attire scurry below in the shadows. Taylor maintains that audience involvement is crucial in creating the atmosphere. The onus really is placed on the crowd, and they reciprocate as they dazzle in glamorous frocks and suits. Widely known for its regular screenings for Film Fatale events, the Sugar Club is a dab hand at this game with exceptional sound and visual quality. Even the murmurings of the crowd remain neither grating nor intrusive throughout viewings.

Over the last five years, Film Fatale has perfected the art of a good old-fashioned, 20th century night out. The films range from film noirs such as The Big Sleep and Chinatown, to festive favourites such as It’s a Wonderful Life and the musical, White Christmas. Mainstream classics ensure a broader audience range with the likes of Breakfast At Tiffany’s and Psycho regularly appearing on the bill. The most endearing factor of Film Fatale is its after party that promises that your favourite classic won’t be marred by techno music. The Film Fatale crew wouldn’t dream of exhibiting the suave Cary Grant against the backdrop of the Saturday Night Fever soundtrack. Lumping the gems of the 20th century together into a muddled mess is not their style. Customisation, personalisation and detail are without a doubt their greatest strengths. The film and cultural elements from the relevant decade are harmoniously married in creativity, and are deployed to create wonderfully tailored evenings.

The Breakfast at Tiffany’s screenings are of course suitably followed by a swinging 60s after party, a spectacle that would make Holly Golightly’s eyes dazzle. The theme supports the classic, the classic supports the theme, and the audience supports it all, making Film Fatale an ingeniously glorious night out. In general, screenings sell out weeks in advance, but there’s always space at the after party at 11pm, for which tickets can be purchased at the door. Dublin’s top performers hold court such as Jaime Nanci and The Blue Boys. Performances are followed by the venue’s resident DJ, The Andrews Sisters’ Brothers, who infuses the tunes with old-world melodies and adds a modern twist.

Film Fatale’s website is good to check out prior to events. Tickets for screenings can be purchased from their website through EventBrite, with student tickets priced at €17. The website covers upcoming events, news, and the burning conundrum of what to wear. Their website caters to the dazed and confused who remain at a loss at what to wear to such an evening. The Vintage Handbook blog is on hand to help, with detailed descriptions of fashion trends, makeup and dancing of respective eras. Step-by-step makeup tutorials are indispensable to those wishing to attain particular looks of Hollywood’s most iconic starlets, such as Tippi Hedren with her immaculate poise in Hitchcock’s The Birds.

Jay Gatsby knew how to throw a party – he was the best at it. Some would even say he was great. Film Fatale have brought “the greatest party in all of literature” to life in hosting a vintage, Gatsby-themed extravaganza. Film Fatale has extended their offering outside the confines of the Sugar Club with an event entitled “Prohibition – Gatsby’s Mansion” that has appeared on the events calendar twice this year, first on the Ides of March and again at the height of summer in August. The exquisite surroundings of the Royal Hospital in Kilmainham with its extravagant lawns and courtyard has dutifully played host to Gatsby’s guests on both occasions. With flamboyance as a prerequisite, Taylor contends there are few venues as “fittingly decadent as the Royal Hospital”. The venue screams sophistication for this “outdoor-indoor, ritzy Roaring Twenties Vintage Party”.

The prohibition party had initially begun as a minor event, with an aim to grow gradually over a period of years. Yet Taylor remains enthralled by the massive response, particularly as there was minimal advertising involved: “It’s barely been advertised. But the word of mouth has been amazing.” Gatsby’s limousine is on hand to assist those early birds, collecting guests from the gate and winding gracefully towards the mansion for a night of delight and debauchery. Inside, throngs of guests float from one room to another, picking up bathtub gin punch as they glide. Electro-swing and vintage tunes are the resident sounds, tailored to the gangsters, the flappers, the Jays and the Daisys. Essentially, it’s a massive party. As Fitzgerald says, large parties are so intimate. Film Fatale has succeeded in creating a charmingly intimate affair that has recently transformed into one of the “biggest vintage parties in Europe”.

The Film Fatale setup displays a remarkable likeness to the infamous movie screenings in the Hollywood Forever Cemetery, over 5,000 miles away in Los Angeles. Every year from May through to September, the Cinespia Organisation hosts open-air screenings of classic films from the silent era to films from the 1990s. Crammed with ancient crypts, graves and tombs of Hollywood’s most esteemed alumni, screenings are exhibited in an environment steeped with history. Nestled on the old grounds of the Paramount Studios lot, the audience are just a stone’s throw from Santa Monica Boulevard and the marvelous surroundings where the classics originated. Of course, the rain would drench our flapper gowns and drown out the witty dialogue if Film Fatale were to imitate the outdoor Hollywood screenings. Yet Film Fatale have succeeded in moulding an in-demand event into the Irish context, perfect for Dublin inhabitants.

The precision and detail involved in producing an atmosphere and event tailored to a particular decade is what dictates the magic. In Hollywood, the movie is shown and everyone drives home after. In Dublin, the classics are displayed, complimentary music is played, and the audience plays their part. The Film Fatale crew have created something special not solely for diehard cinephiles, but for old souls with an affinity with the past. The question remains if Film Fatale has tapped into the common consensus that technology-led lives are simply exhausting us. The high attendance at Film Fatale may be driven in part by a desire to revisit the past, perhaps signaling a longing to escape the modern world. “We’re nostalgic creatures,” Taylor says, “but part of it is that when time passes, all that is really remembered is the best fashion, films and music. So when you’re at a vintage night you’re getting the best of that era.”

Film Fatale’s connection to the past is strikingly evident, but what can we expect from it for the future? “We’re moving our screenings and vintage parties to a new venue which after five years is a chance to shake it up. Prohibition will be back in 2016 with three parties all exploring different aspects of the era. We’re working on some new events, but our big focus is making each prohibition party better than the last.” Film Fatale are experts in placating vintage-lovers and executing Dublin’s best, good old-fashioned night out. At the end of the day, this is what Dubliners want. In a way, everything has changed, yet nothing has changed.