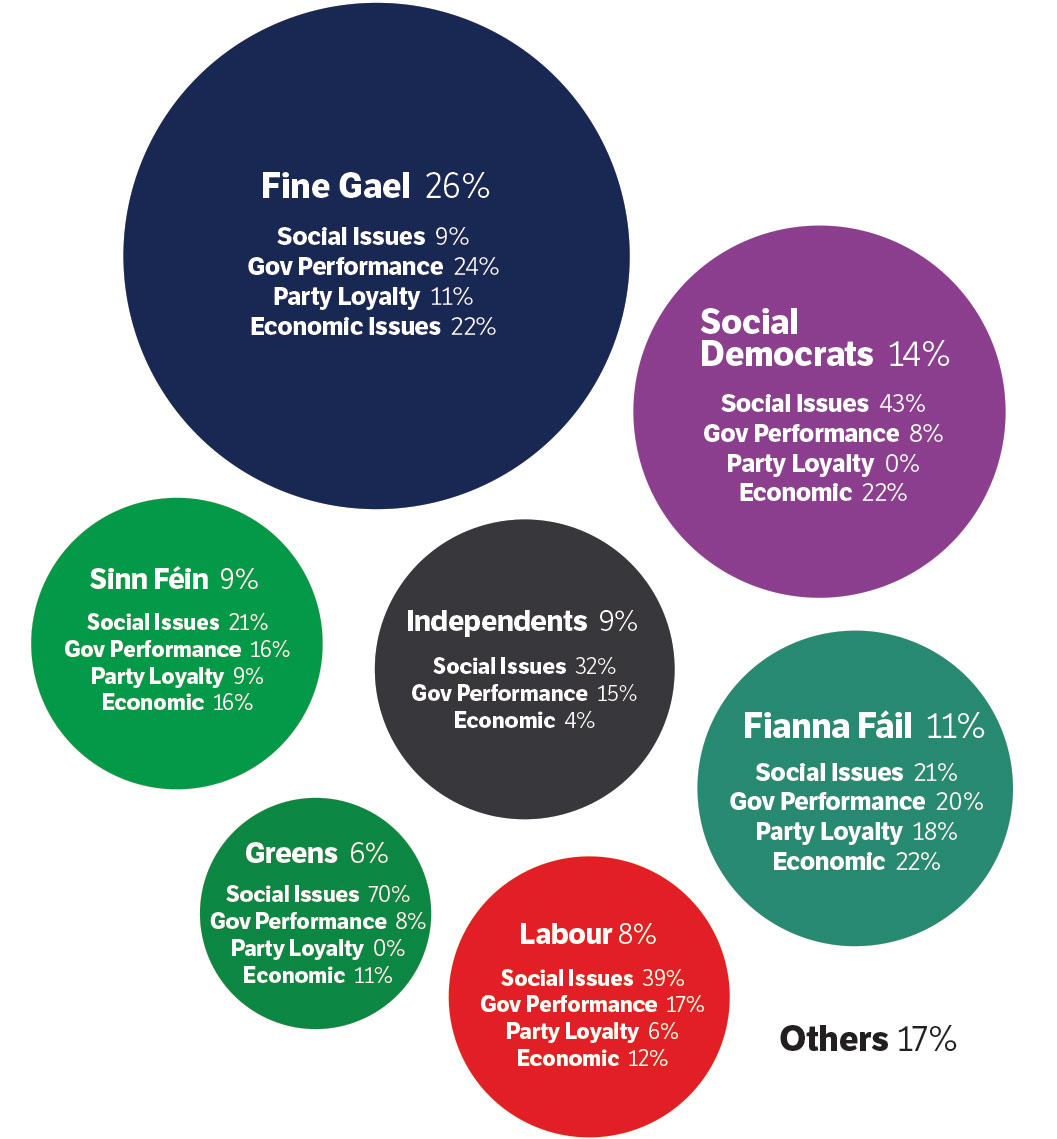 More than 26 per cent of voting Trinity students will give their first preference to Fine Gael in the upcoming general election, a poll of 1,007 people conducted by The University Times has revealed, with social issues being the single biggest motivating factor behind first-preference votes.

Conducted on February 10th–12th on campus and at off-campus locations, the in-person poll also revealed that just over 14.3 per cent of Trinity students intend to give their first-preference to the Social Democrats, a number much higher than comparable national polls. 71 per cent of students said they will vote, while a further 16 per cent said that might/might not vote.

Rather surprisingly, those motivated by government performance did not appear to be mainly supporting anti-government parties, with 46.6 per cent of those who gave this as a reason being supporters of either Fine Gael or Labour, and the remainder going to opposition parties.

Interestingly, there appears to be major differences between parties in the field of motivation for giving them their first preference. The highest proportion of Fine Gael voters gave government performance (just over 24 per cent) as their reason for voting for the current incumbents with the second highest being about 22 per cent of people citing economic performance as their motivating factor.

Local issues and third-level issues lagged behind in the poll – on 8.6 per cent and 10.5 per cent respectively – suggesting that national issues and overall current satisfaction with the government’s economic approach is the defining factor motivating their vote. Fascinatingly, against general trends, Fine Gael voters appear to not be significantly motivated by social issues – with only 9 per cent of voters expressing these as a key concern.

On the other hand, supporters of Fine Gael’s coalition partners, Labour, are more in line with the general trend: 38.5 per cent of their voters put their support down to being as a result of social issues. This is perhaps representative of their role in the marriage equality referendum, and their party’s general overall support for repealing the eighth amendment. Their colleagues on the “centre left” of the political spectrum, the Social Democrats, saw a similar emphasis on social issues – with 42.5 per cent of their voters being mainly motivated by these. 69.4 per cent of Green Party voters listed this as their primary reason for their first preference.

Indeed this trend is repeated across the left, with 48 per cent of Anti-Austerity Alliance–People Before Profit voters listing this as their key reason. Contrastingly, Fianna Fáil voters were a bit more evenly spread across the categories, with government performance, party loyalty and social issues all lingering around the 20 per cent mark (19.5 per cent, 18.3 percent and 20.7 per cent, respectively). The even spread was roughly similar amongst Sinn Féin voters, albeit with a higher percentage of them being motivated by societal goals – coming in at 21.4 per with government performance and economic issues coming in just behind on around 15 per cent.

The overall results of the poll conducted by The University Times suggest that social issues continue to permeate amongst students as the chief motivating factor behind their vote, with perhaps the desire for social change being motivated by the great success of last years Yes Equality campaign, alongside significant repeal the eighth and divestment campaigns on campus. Further movements being pushed by current TCDSU President Lynn Ruane could perhaps also be a reason for this chief motivating factor.