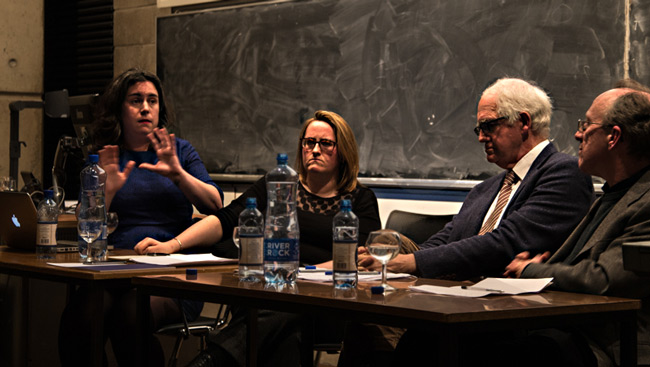 A debate on the legal consequences of repealing the eighth amendment jointly organised by Trinity College Dublin Students’ Union (TCDSU) and Trinity Law Society (Law Soc) tonight descended into an exchange about the morals and values of abortion – something inseparable from the law, according to the speakers.

Prof William Binchy, the former Regius Professor of Laws, told the gathered crowd that you could not “waste a moment’s debate about laws unless you can talk about values – issues of justice, human rights and humanity”, and said that law had “no useful function” unless it is dealing with them.

The first speaker was Máiréad Enright, a Lecturer in Law at the University of Kent. Enright focused on the concept of proportionality, suggesting that the limitations imposed on the rights of women by the eighth amendment must be proportionate to the objective of the eighth amendment – the protection of unborn life, and said that the repeal of the amendment would open space for “expanded jurisprudence” for bodily integrity, which Ireland currently does not have. “We could express recognition of the right to bodily integrity”, she said. “We could start to have discussions about free, safe, legal abortion.”

Recognising that abortion is a choice that many women will make, she concluded: “We have no option but to trust women, and they are fully deserving of our trust.”

Noting that “profound disagreement” always exists in “the area of profound values”, Binchy, who was a prominent proponent of the eighth amendment prior to its introduction in 1983, spoke about the “equal and inherent worth of every human being”. While noting that the debate has to be “about respect for women”, he questioned why the unborn child would not be given the same respect. Binchy made extensive comparisons between the unborn who may have foetal abnormalities and the “old, decrepit people” who have the right to live. “Regardless of their disability and the profound challenges that they may represent for their parents, those children have a right to live”, just as those in old age have the right to live, he said.

Prof Fiona de Londras, from Durham University’s Law School, said that it was “certainly true that the question of the legality of abortion and the question of morality are not easily divisible”, but emphasised repeatedly that a repeal of the amendment would “allow people to work out for themselves what they feel the right thing is to do”, both allowing “space for people to make moral decisions” and “for politics to debate questions of profound moral disagreement”, she said. Currently, the eighth amendment “shuts down space for moral decision making and shuts out space for political debate”, she said.

De Londras also spoke extensively about the weight we should expect women to carry: “How much burden do we think a pregnant women should have to accept in order to ensure that a foetus is born alive? Blindness, diabetes, dislocated hips?”. In Ireland, she said, the “the only thing women should not have to accept is death”.

She also criticised the Protection of Life During Pregnancy Act, and cautioned against producing something as “vague, unhelpful and practically meaningless” as something which allows abortion only under something such as the “real and substantial risk to life”, pointing to the difficulty medical professionals have in determining when this occurs. Similarly, she said that she was opposed to abortion laws allowing abortion in the case of rape just because there is political agreement in this area. She questioned how a women would prove that they had been raped. “Would you have to go to a doctor and prove that you have been raped? Would you have to go to a Garda station and get a certificate?”, she asked.

Trinity’s Prof Gerry Whyte was the final speaker. Whyte was a member of the Commission on Assisted Human Reproduction, and focused particularly on his experiences from the commission’s deliberations on the status of an embryo, after noting that he felt the Oireachtas would be free to legislate for abortion if the eighth amendment was repealed. He said he found himself in the “horns of a dilemma” when it came to rape victims and fatal foetal abnormalities, and the “the idea that the law may coerce a woman who has already been violated into fulfilling a pregnancy”, saying he could understand “compassionate arguments”.

During the commission’s deliberations, he said, “there wasn’t one particular argument put forward to differentiate early embryonic life from that of later life”, noting that he was unconvinced by all of them. In particular, he noted that any argument for abortion which rested on something already happening in nature, such as the loss of an embryo without intervention, was a “naturalistic fallacy”. “That’s not a sufficient defence for humans deliberately taking actions to destroy embryos”, he said. He also said that defences comparing the absence of brain activity in those at the end of their life and embryos at a stage before brain activity were inadequate, noting that brain death was the “permanent absence of brain activity”. He summed up his arguments by saying that any “attempt to try and find a morally crucial dividing line between life at its earlier stages and life at its later stages simply breaks down”.