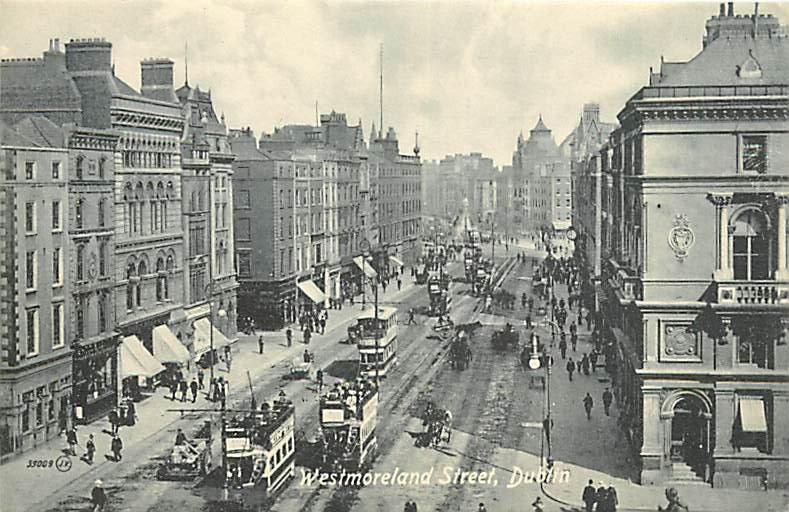 This March, Dublin is busy devoting itself to remembering the Easter Rising, the event that sparked a revolution. 100 years ago Dublin was, rather unknowingly, creating a tense setting that would spark a powerful event the following month. As March 1916 fell midway through the Great War, all papers include the names of the injured, killed and missing, many of which were native to Dublin. Advertisements also lined the pages, highlighting in bold the locations for military registration offices in Dublin and around the country. The Dublin registration office was located on Amiens St, a mere 15-minute walk from Trinity, next to the train station.

As taxes from the British increased due to the cost of the war, the economy fell rapidly during the month of March. The Dublin Stock Exchange was said to be heading towards a depression, according to the Freeman’s Journal, with only a small number of minor transactions occurring throughout entire month. Around the world, many places, including Dublin, were passing movements refusing to pay any more taxes to the British. These movements helped to set the stage for the events of April 1916.

The economy was not the only thing failing that month, as Dublin’s working class suffered an immense housing crisis. On March 14, 1916, the Housing Committee proposed a plan to Dublin Corporation suggesting a solution to the crisis. This solution, according to the Irish Independent, needed more money than was available which meant the introduction of either a loan from Britain or a rise in taxes for the Irish people. Many opposing the proposal thought that the public would be unable to pay the tax and, though it was “unfair”, the British would not fund the project interest-free, if at all. As of the end of March, the project had not been accepted and was to be tossed away completely.

March was also a month full of peculiar criminal cases. On March 3rd, Geoffrey Dunlop, a member of the Society of Friends, was sentenced to six months of imprisonment under the Defence of the Realm Act. According to the Freeman’s Journal, Dunlop was caught posting notices bashing Lord Kitchener, an Irish-born officer in the British Army. Dunlop justified his actions by saying that he was “enlightening the public” and “would not be put down by authorities”. Though Dunlop told friends he would no longer pursue the desecration of Lord Kitchener’s reputation, this was not enough to convince a judge, and he was imprisoned.

Though the effects of the war were severe, they did not destroy Dublin’s morale completely. The fine arts sector still prospered during the month of March. An annual competition hosted by the Royal Dublin Society in honour of Captain George Archibald Taylor was put on in Dublin and saw a vast array of works from across the country. The judges were quoted as being “surprised that there were practically no landscapes submitted” and were disappointed at their absence.

The modernisation of Dublin also began to expand during this month. The first meeting about the creation of a new Dublin-Galway road that would be more suitable for motor vehicles occurred on March 19th. Though the Irish Independent writes that the project could total over £200,000, its utility to society as a whole was emphasised. Again, the issue of paying for the project was questioned, as neither taxing the public nor asking Britain to fund it were plausible options.