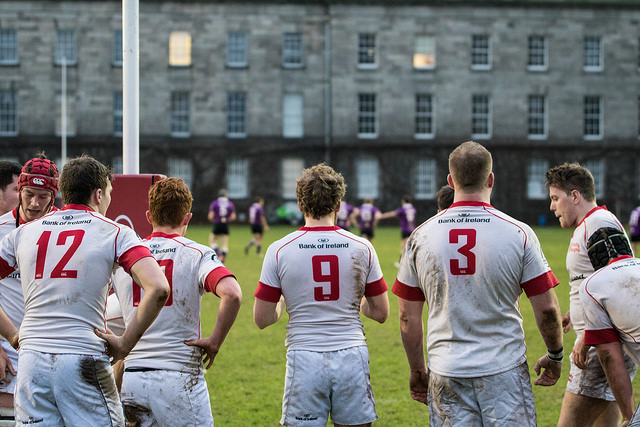 Dublin University Football Club (DUFC), Trinity’s rugby club, had a cause for celebration tonight as the annual rugby colours match ended in a 28-15 victory for Trinity, securing them the coveted colours trophy. It was not easy, however, and it wasn’t until the last 10 minutes of the match that fans felt certain the trophy would spend the year in the city centre.

The start of the match set the tone for the game, which was full of hard tackling, great runs and clever passing. Trinity began with a kick into the corner. Although they contested for the ball, it was turned over and kicked long by UCD, giving Trinity another chance to run it in. But handling errors saw them lose the advantage they held with a knock on. After some brave defending, Trinity managed to get back on the attack with a turnover, before again kicking out of touch inside the 22. Poor handling from the lineout allowed UCD to easily take it, but a mistake by the visitors awarded the home side a scrum that subsequently resulted in a penalty for Trinity. However, the chance to go up on the scoreboard was wasted, leaving the game scoreless at just under the 10-minute mark.

Trinity continued to work hard but UCD managed to win possession deep in their own half. A series of plays saw them carry it up to within the home sides’ 22 line, but a turnover for Trinity and a yellow card for UCD after a deliberate knock on by their number 6 gave Trinity back possession. In a stroke of bad luck, Trinity’s number 10, Jack McDermott, had to be taken off due to injury.

After working the ball back into UCD’s half, an unfortunate handling error gave away possession. This allowed UCD to execute a successful kick and chase leading to the first score of the match, with a missed conversion, putting the visitors 5-0 up after just past the quarter hour mark. Trinity didn’t take the score lying down and immediately struck back with some beautiful cross-field passing, ending with a move by number 11, Max McFarland, who ran it into the corner and continued on to touch it down straight behind the posts, allowing the easy conversion to put the home side 7-5 ahead.

It was UCD’s turn to enjoy a momentum swing after getting their sin-binned player back on the pitch plus a penalty to put them back in front. The next 10 minutes saw little progress beyond the middle third, with neither side able to break through the others defence. The stalemate ended with a UCD penalty to give them a chance to extend their lead, but it was poorly taken. This allowed Trinity to drive up the pitch, ending with captain Nick McCarthy to win a scrum inside the 22 with just minutes left in the first half. Nothing came of it, though, and the sides entered the dressing room with just a point separating them.

The second half started off with a bang with first UCD and then Trinity attempting a kick and chase strategy, leading eventually to a line out for the visitors inside their own 22. A brilliant block down and hard work by Trinity forced the ball out for their own lineout but they unfortunately turned it over and were awarded a scrum against them. It took 10 minutes for a score from either side, and it was the home side who struck after a penalty for not rolling away gave them a chance to go 10-8 up after the number 15, Conor Kearns, placed it between the uprights. Trinity added to this just five minutes later with another penalty for a high tackle.

However, UCD was quick to reply and put themselves 15-13 up after number 4 put it over the line after a messy scramble along the line followed by a well-taken conversion. It looked like Trinity would cancel this hard work out after they broke through the defence of the visitors. But the ref decided the ball had been knocked on, a decision which was greeted by a chorus of boos from a strong home crowd. Trinity’s number 12, Seb Fromm, then had to leave the pitch with an injured foot, leaving the side down a key player with just over 15 to go.

Trinity drove on with determination not to lose at home. After being awarded a scrum just outside the 10 for a deliberate knock on, which lead to another UCD player being shown yellow, they drove UCD back and were awarded a penalty after the visitors collapsed the scrum. After driving it nearly to the line, UCD again collapsed, awarding Trinity a penalty try that was converted, putting them up 20-15 inside the last quarter of the game.

The last portion of the game saw a serious upping of intensity from what was already a game that didn’t lack action, with neither side wanting to leave the pitch losers. But after a long period of action, a penalty for Trinity saw them gain a safety net. A quick reply by UCD gave them a chance to reduce the lead but it was missed, leaving Trinity at 23-15 with just under 5 minutes remaining.

Trinity would be forgiven for sitting back and letting the clock run out, but after a turnover just before the half way line, number 8, Tom Ryan, found himself in possession and, although the home crowd urged him to kick it out for the win, with nothing but open air ahead of him there was only one place the ball was going. He brought it solo from the half way point to touch it down and put the exclamation point on the victory.

Although the ref gave UCD one more chance to put something else on the scoreboard, it was soon over and the colours match ended in favour of Trinity, 28-15.