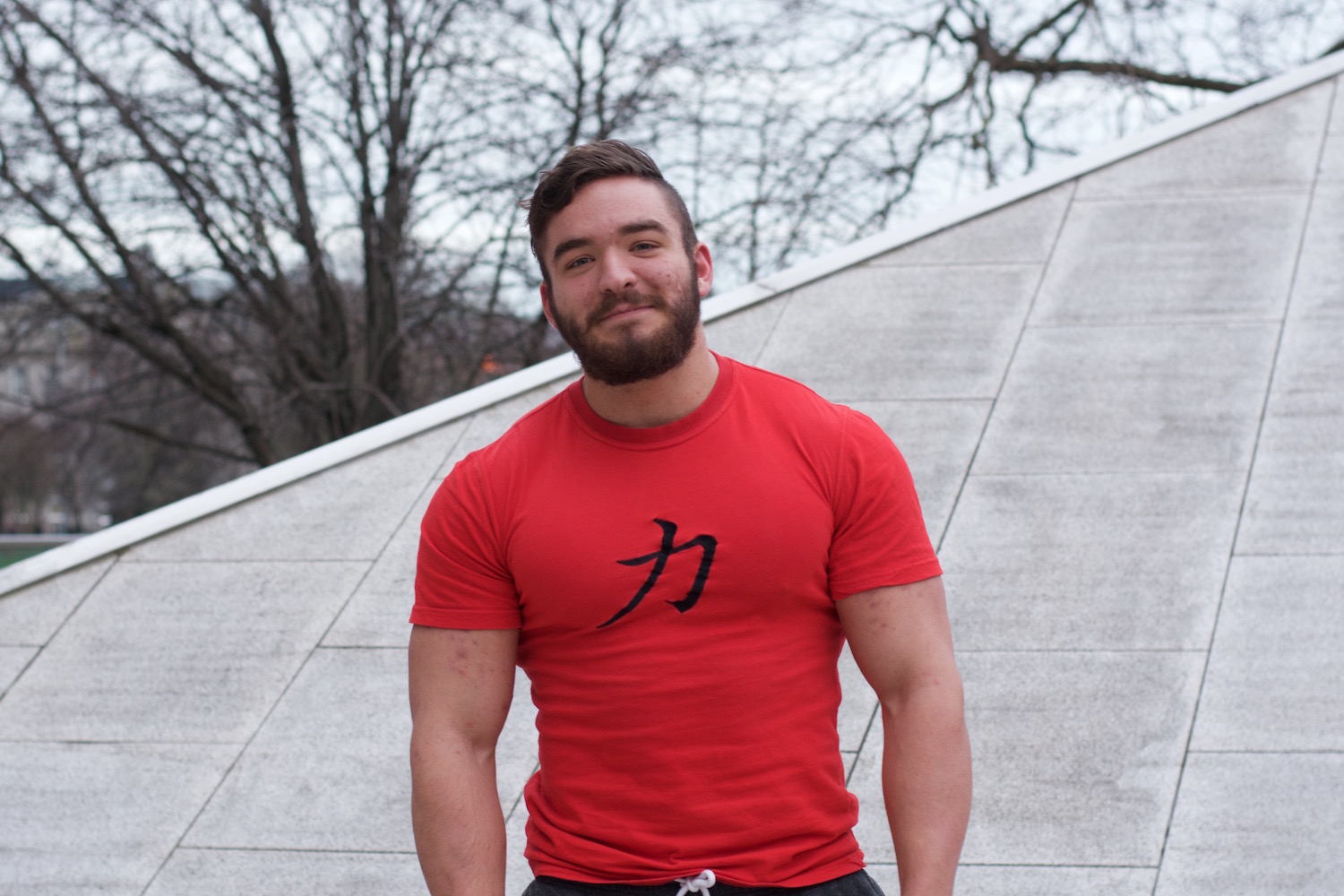 Walking through the Arts Block on a quiet Thursday afternoon, I feel more self-conscious than usual. People are staring. They glance casually up from their phones or tilt away from their conversations, and then they are transfixed. Not by me, I should point out, but by the man-mountain walking alongside me. The actual Mountain from Game of Thrones could walk through the Arts Block, and he wouldn’t attract much more attention. Most impressively, though, Killian Carolan is wearing shorts in the Arts Block and pulling them off. Having escaped to the relative isolation of the stairway at the far end of the Arts Block, I can’t help but feel like we’re out of the woods, but oh no. There’s a brief struggle where Carolan becomes wedged between the double doors still to deal with. “This college wasn’t built for people like me”, he laughs, after extricating himself.

In fact, he laughed quite a bit throughout the entire interview, and for someone who trains so hard and pushes himself to his physical limits, Carolan doesn’t take himself too seriously. When I ask him how he got into powerlifting, a sport not many people are familiar with, he explains: “I got into powerlifting through playing rugby, but I realised I would prefer an individual sport more. I did my own research and decided I liked powerlifting.” Often a friend or a family member has an influence when someone takes up a sport that can be considered off the beaten path, but that wasn’t the case here. “No, none of my family are into powerlifting, my family all think I’m crazy. It was more a matter of me seeing what the fitness industry was like, seeing what I could take from it. I didn’t want to be what everyone else wanted to be, a ‘calendar boy’. That physique isn’t what I’m interested in looking like.”

The actual Mountain from Game of Thrones could walk through the Arts Block, and he wouldn’t attract much more attention.

I hadn’t intended to discuss body image issues with a powerlifter, but Carolan was very frank about the pressures young men face today: “Young guys come into the gym saying how they want to look – the Calvin Klein model – and it’s not really achievable at their age, so ultimately they’re not getting the results they want and end up packing in their training.” It is easy to imagine boys growing frustrated with their lack of progress towards the perfect physique, but to swear off the gym completely and take that hit to their self-esteem cannot be good for them in the long run. Carolan believes it’s better that children are introduced to resistance work from an earlier age to develop confidence in the gym and in themselves, imbuing them with a level of body security before they are confronted with the expectations of society. “The pressure can lead people to do drastic things. You hear so many girls suffer from eating disorders – they starve themselves trying into that perfect shape.” This is tragic for a myriad of reasons but even just because from a biological standpoint, as Carolan puts it: “A lot of it comes down to genetics.” The message Carolan embodies is that people should be comfortable with themselves despite whatever society thinks, but also comfortable enough in the gym to strive for change should they want it. At the risk of sounding like a motivational speaker, the drive to change has to come from yourself, not others.

Setting aside those weighty issue for a moment, we move on to discuss his training regime: “I train six days a week, the sessions usually last two to two and a half hours long. It’s pretty intense work, especially ahead of a competition. My central nervous system is a little overloaded right now, I’m not as on the ball as I usually am, and sleep isn’t as good as it should be.” I push him about his difficulty getting to sleep, but he seems fairly unconcerned: “It’s only an issue when training is super intense. I’m pretty good about tricking myself into sleeping.” He shrugs and smiles. On top of the training, Carolan has to follow an eating regime with one simple rule – keep it mostly clean but eat large amounts of food. “You wouldn’t really set a ceiling in terms of calories”, he says. “It’s just everything. I’m probably eating four or five times more than I would be normally – which works out at around 8,000 calories a day. I am always eating. You’re smashing your body pretty hard when you’re training, so you need to take in plenty of protein at least.”

Listening to him talk about how he suffers after max effort training sessions, I couldn’t help but feel physically uncomfortable myself: “I get headaches. Migraines can be bad. You get burst blood vessels in your eyes, which makes you look kind of crazy. When people hear that, they say: ‘That can’t be healthy’, but it is. Your body is under pressure, so it reacts like that, it’s natural.” Of course, I have to ask him about the motivation behind this effort. What makes it worth his time? He thought about the question, and all of a sudden, his face lit up. I saw certainty written all over it: “You could be having the worst day, feeling terrible and then, when you set foot in the gym, it’s all forgotten about. You know what you have to do and you go and do it. I love that clarity of intention.” While the cost is high, and you may be pushing your body to its very limits, Carolan is so eager to point out just how the rewards make it worth his time: “When you hit a personal record, or do something you never imagined doing, say you’re squatting like triple your body weight, it’s crazy. The euphoria feel is incredible.”

“When you’re underneath three times your own bodyweight, squatting it, it could so easily crush you, snap your bones, tear your calves right off your legs. Kill you.”

But can anybody just start lifting weights and hit those same highs? What does it take to be a powerlifter as opposed to an enthusiast or a gym regular who works with weights, as he himself once was? “Obviously you have to be dedicated, committed, you have to know what you want and be driven towards that goal”, he says. But, he adds: “You need to be a little reckless. You do need to have some disregard for your own personal safety. When you’re underneath three times your own bodyweight, squatting it, it could so easily crush you, snap your bones, tear your calves right off your legs. Kill you.” A fairly no-nonsense assessment there.

Finally we get the chance to talk about his record-breaking lift, because to my surprise, Carolan is rather reluctant to bring it up himself. When he deadlifted 290 kg in a supervised event with GPC, he set the national record for that category, the 100kg Junior lift – and at the age of just 20. It was great preparation for a potential trip abroad to unofficially represent Ireland, and Carolan hopes to use his success to kickstart a career in coaching young powerlifters as well as support a bid to go full-time with lifting.

While the video of the event is available on Youtube, it is certainly worth summarising here. Resplendent in a lycra one-piece, Carolan claps his hands and step forwards to the weigh lying on the floor. It looks suitably immovable – all 290 kgs of it. The crowd lean forward in their seats. One barely perceptible nod from the adjudicator, and Carolan assumes the position. You can hear a pin drop. He takes just a moment to find his grip and then explodes upright, and somehow the bar comes with him. With every muscle tensed, he turns almost purple, the capillaries in his eyes start to burst, almost audibly, and a tremor shoots down his right leg. The tremor could mean trouble, but he remains upright. It feels like minutes have passed while the crowd silently count to three, and then with another barely perceptible nod, the adjudicator lets Carolan down. Or rather, indicates that he can put the weight down. Carolan returns the weight to the floor with the same motion he lifted it, but this time gently, like he’s finished playing with a baby. He shrugs his shoulders one more time and stands up again, a national record holder.