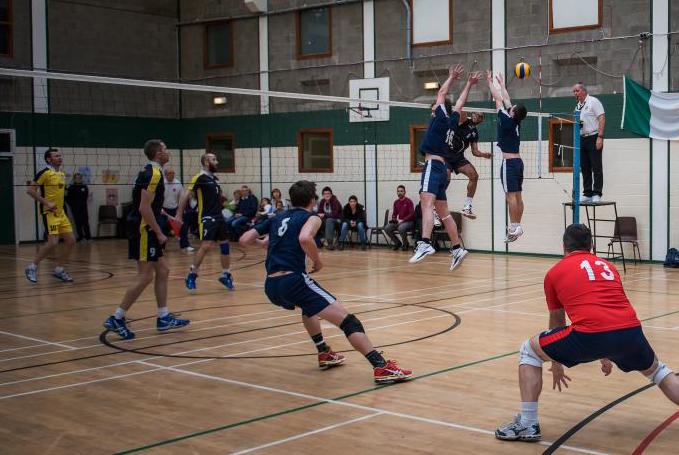 On February 24-26th, the Irish Volleyball Intervarsities tournament 2015/2016 took place across three days. Trinity Volleyball entered both men’s and women’s teams for the competition, with the men’s team left the favourites to win the intervarsities based on successful performances in the Volleyball Association and Student Sports Ireland competitions.

The Trinity women did not have a full team present throughout the competition but played well regardless. Easy victories over DCU and NUIG on the first day allowed them to progress. Only one loss to UCD, the strongest competitor at the intervarsities, marred their performance. In the quarter-finals a complete team performance against RCSI, with standout plays from Luiza Maddalozzo and Fenna Von Hirschheydt, ensured progression to the semi-finals against group adversaries UCD.

Unfortunately most of the women’s players were unavailable for the semi-final against UCD, with only six taking the floor. Lisa Obernerder was Trinity’s most effective asset in the semi-final but, towards the end of the first set, suffered a severe ankle injury. Trinity had to forfeit the semi-final due to a shortage of players and were eliminated from the intervarsities, bringing an unfortunate end to Trinity Women’s tournament.

Trinity Men’s were victorious in all matches and did not lose a single set, finishing top of their pool. 2-0 set victories in all matches indicated the team’s sweeping rise to the quarter-finals. By coming top of their group, the team enjoyed a bye into the quarter-finals. The most anticipated group game was between Trinity and NUIG. Undefeated until Trinity, NUIG were overwhelmed by a top-class Trinity performance led by senior players Benjamin Asa, Daniel Hadley and Patrick Folan. AIT also received a bye into the quarter-finals and were another likely contender to win the intervarsities.

Victor Gomes, an Erasmus student and one of Trinity’s key players, sat out the quarter-finals due to back injury, the only disappointment to Trinity Men’s tournament so far. Instead Louis Blanchard, another Erasmus student, made up for the absent Gomes with a good performance against UUJ. UUJ pushed Trinity to the limit, but Senior Captain Benjamin Asa stepped up to finish the game in the final set, bringing Trinity to the semifinals against UCC. In the other quarter-final, UCD caused major upset by defeating AIT. UCD faced GMIT as a result.

Victor Gomes returned to Trinity’s line up against UCC. This proved important due to the height range of UCC’s team, each member 1.9 meters or taller. Victorious in the first set thanks to excellent play by Patrick Folan and Dmitry Chavro, Trinity were unfortunately defeated in the second set of the semifinal. Trinity’s grit saw them though the final set as UCC were overrun by combined play from club president Daniel Hadley and Christoph Rohrmeier. Trinity now continued to the final against UCD.

UCD had pulled off the upset of the tournament to make it to the final, and for the most part Trinity was looking like a complete team playing the best volleyball of the tournament. The final was a tightly contested affair, with neither team able to pull ahead. UCD claimed victory in the first set only for the score to be levelled in the second set by Trinity. This continued for the next two sets. In the fifth set, Trinity took a commanding 8-2 lead until UCD came storming back to a 10-9 advantage. Patrick Folan, looking for a change of momentum, performed a risky play to break UCD’s momentum and evened the score 10-10. Despite injury, Victor Gomes returned to court for the final few points, instantly contributing to Trinity taking a 14-11 lead before removing himself from play. Trinity went onto win 15-12 in the fifth set, ending the tense affair. Trinity’s victory secured them the final and the intervarsities cup.

A key moment of the final was the loss of Victor Gomes again to injury, this time his ankle, as Trinity were pulling ahead in the fourth set, 20-15. This was a tough loss to Trinity as Gomes was one of Trinity’s best performers in the tournament. Louis Blanchard stepped in again, playing as well as he had in the semi-final. Arguably Trinity owed the fourth set to Blanchard’s general good play, with a considerable contribution from Daniel Hadley.

All team members played admirably in the final, with particular mention going to Dmitry Chavro, Louis Blanchard, and Christoph Rohrmeier.

Senior Captain and third-year medicine student, Benjamin Asa, won MVP of the tournament, and has been one of the leaders for the Men’s team and club in previous years.