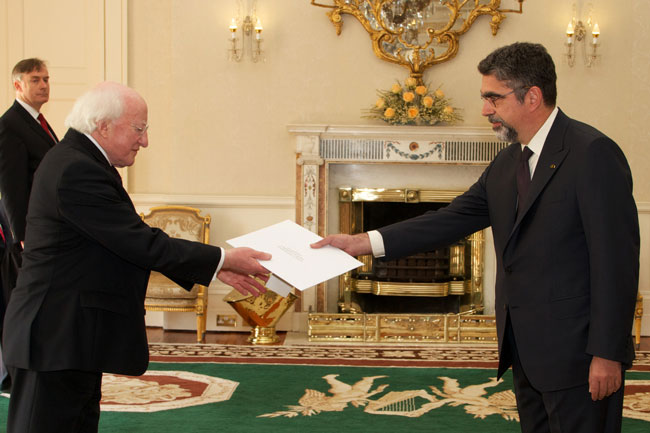 His Excellency meeting with President Higgins in 2012.

On Tuesday, His Excellency Bernardo Futscher Pereira, the Portuguese Ambassador, addressed the Society for International Affairs (SOFIA). This marked the first in a series of ambassadorial talks which SOFIA hope will take place nearly every week, culminating in the Ambassadors Ball in February.

His Excellency has served as a diplomat for almost thirty years. He became an Ambassador four years ago, when he first took up the role in Ireland. His Excellency began his speech with an overview of the career, which he compared to a hierarchy like the military. People join up young and rise through the ranks. They begin as an attaché, then go on to become third secretary, second secretary, counsellor and minister, before finally becoming an Ambassador. His Excellency advised potential diplomats to consider the long process involved.

The Ambassador expressed his desire to explain the functions and duties of the job as it is “often not very clear what diplomats actually do”. He defines diplomats as political agents of their own state. There are many different types of political agents but a diplomat is distinguished by the fact that they are recognised as legitimate by the receiving state. Accordingly, they are awarded unique privileges and immunities. “Sometimes people think we’re politicians but we’re not. We’re civil servants,” His Excellency clarified. Although both are involved in politics, he distinguishes that politicians need votes and exercise power, whereas diplomats do not.

In the Embassy, the Ambassador’s job is to work with the host government and develop relationships with the two countries. Ambassadors also have consular duties. The Portuguese Consulate caters to Portuguese nationals and provides them with public services such as supplying documentation and passports. In other words, the Consulate is at the service of the Portuguese community, explained His Excellency.

“Diplomats are wordsmiths, like being a lawyer or a journalist”, he explained. “It is through words that you reach agreement”

The Vienna Convention of 1961 defines the rights and privileges of diplomacy as follows: representation, protection, information, promotion and negotiation. Many people do not realise that this is such an important part of the job, he said, explaining that the foreign service is a political machine which provides a large amount of information. It is the diplomat’s job to condense this into a short and clear memo.

His Excellency noted a number of changes which have occurred in the twentieth century. For one, multilateral diplomacy has grown enormously. Previously, diplomacy was limited to relations between states. Now, international organisations such as the United Nations and the EU means the role has become more varied. The growth in the speed of communications is another major change. The Ambassador believes this has altered the way in which diplomats perform their functions, but not the functions themselves. He dismisses the idea that modern advances in communications have rendered diplomacy superfluous. In fact, he believes diplomacy has never been so important. International relations are becoming more important and focused on increasingly specialised and highly technical issues, such as climate change and nuclear disarmament. “[Diplomacy] is less glamorous than it once was,” the Ambassador told SOFIA. In the future, His Excellency believes diplomats will focus on even more technical issues, in order to effectively communicate technological nuances. This is especially important as the people who hold power are not always experts in this field.

His Excellency stressed the importance of effective communication. Communication is key to successful negotiation, a crucial part of both bilateral and multilateral diplomacy. “Diplomats are wordsmiths, like being a lawyer or a journalist”, he explained. “It is through words that you reach agreement”. Communicative skills are also key to condensing reams of information into a clear and readable memo for government officials.

His Excellency also spoke of the importance of proper protocol. Traditionally, this was used to establish rank and precedence. Today, it is less about elitism and more about “making life easy for people”. When faced with a formal dinner or ceremonial dinner, protocol serves as a facilitating tool so that people know what is expected of them. Ambassadors are also responsible for organisation and logistics. If, for example, the Portuguese Prime Minister visits, the Ambassador will have to organise the whole trip for him, from accommodation to amenities.

Diplomats are facing new, modern challenges. “Now we also have to do social media,” the Ambassador remarked wryly. Once, diplomats had to be discreet in order to best deal with complex and sensitive issues. Now, they are also expected to be journalists conveying messages about their country’s goals. However, the Ambassador does not denounce new media. In response to an audience member’s question regarding the age of information and constant communication, he described social media as “basically a publishing tool” which gives a voice to all. This generates a more inclusive dialogue. The Ambassador believes that anything that expands freedom, spreads information and gives people scope to express themselves is generally good.

He cautions against direct communications between parties with strong emotional ties to an issue. He witnessed the challenges of such communication while negotiating a resolution on the Israeli Arab conflict. He thinks it is preferable to have a mediator who will allow the parties to step back and think things through thoroughly. And this need is more pertinent than ever today. “One must realise that as international politics become increasingly interconnected, there are opportunities for cooperation but also opportunities for friction, as interests do not always coincide”, his Excellency remarked. His measured response is testament to the importance of judicious communication.

His Excellency also commented that Brexit will consume a great deal of political energy. He believes Ireland will undoubtedly be affected, as its path will now potentially diverge from Great Britain after the countries had worked so closely together while in the EU since 1973. However, the Ambassador reassured the audience that there was no need to panic, as change will take place over a long time. The Ambassador was also asked if Ireland would benefit from decriminalising drugs, as has been done in Portugal. His Excellency responded that it was not for him to say, but that decriminalisation had been successful in Portugal.

When asked about his hobbies, he replied that he used to be a DJ in the 70s and 80s

He spoke of his love for his career, describing the work as very interesting and varied. He sees the constant moving as necessary, to ensure Ambassadors don’t become too accustomed to the host country and so that new ideas are constantly coming in. He added that it was an honour to serve his country.

Finally, SOFIA asked the Ambassador three more general questions they will be addressing to all their guests. The Ambassador named Winston Churchill as his hero, “not very original”, he admitted, going on to praise the leader’s writing skills. He said he would like to travel to the US, especially New York or California. This, too, he acknowledged was not especially ground-breaking. But his response to the third question came as a surprise. When asked about his hobbies, he replied that he used to be a DJ in the 70s and 80s. This earned a laugh from the crowd and he assured them, with characteristic composure, that “that’s all in the past now”. It seems the music scene’s loss is the international community’s gain.