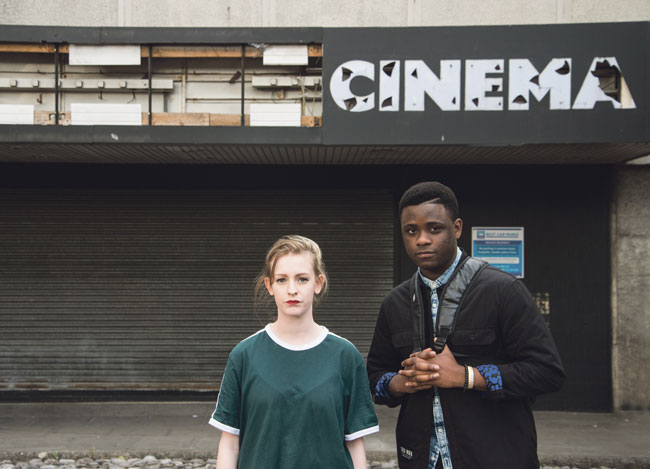 Off the back of months of gigs and festival slots, most recently playing at this year’s Electric Picnic, Katie Laffan and Damola are rising in the Word Up Collective. Having recently recorded their first collaborative effort, “Trophy”, due out next month, Killian Barry caught up with them as they prepare to bring their unique sounds and styles to Trinity’s Freshers’ Week.

Both of you are very alternative, eclectic and diverse, blending genres and styles. How would you describe your sound to those that have never listened to you before?

KL: Hip Hop with a twist. I feel you could make it into a rap … but I’m singing it. I like to throw in other genres, reggae, disco, funk, just to make it that bit different, yenno?

D: Yeah, I like playing around with sound, but the core is still hip hop. It’s still rap, but within that I try to be a bit more melodic. There’s a lot of focus on flow.

What are the roots and influences of these styles, and what inspires you to perform?

D: I always trip when someone asks me this because I listen to everything. In terms of influences, I listen to a lot of southern american rap, early 2000s: Lil’ Jon, Lil’ Wayne, Young Jeezy, T.I., all those guys. A lot of 90s though too, like Nas and Tupac.

Is this an intentional direction, or does it usually just flow out?

KL: Everything I do is produced myself, and I’m limited to what I can put out in that way. I don’t have a live drum kit at home, so I’m using a lot of samples.

D: I don’t think it’s intentional, I think it just comes out like that. I feel in music your input determines your output, and whatever you listen to subconsciously has an effect on what you create. That’s why I’m happy I’ve listened to a broad range of music … I mean, I used to listen to Westlife a lot. Don’t worry, I’m not going to be playing anything like the Backstreet Boys, but yeah … maybe they had some sort of influence.

What is it like being part of the Word Up Collective, and how important has that kind of collaboration, support and guidance shaped your emergence?

D: It’s definitely exposed me to different genres and new ideas. Working with Katie, the first day we worked together, and the way we came up with the sound was spontaneous and new to me.

KL: Yeah, we get to meet people at the same level, musically, and be around people with the same visions and ambitions.

Apparently the Word Up Collective gigs usually end up flowing into an all-out jam. What’s that like?

D: The last Word Up Collective show I performed last, and we had a freestyle session. All of the rappers were there together from the collective, but even people in the crowd who weren’t there to perform but were able to rap got involved. It was crazy though, there was this guy that performed, Ange MC, who is also in the collective, and his freestyle at the end was better than his actual set.

From what I gather, both of you are very much in control of your sound, playing multiple instruments and having the ability to produce full songs on your own. What’s your process?

KL: I start on the keyboard, add the lyrics and build instruments around that. I’m a bit of a control freak with everything that goes in.

D: In terms of production, I work with producers and focus more on the engineering of the vocals. When writing songs, sometimes the rhythm or melody comes first, other times a concept or bunch of words that I try to fit onto a rhythm.

Other than talent and a slice of luck, what kind of qualities do you think are needed to break through, both nationally and internationally?

KL: I think support, something like the Word Up Collective, something to fall back on.

D: Hard work and consistency, but I still don’t think I’ve been consistent enough. As an artist in my genre, you need to be productive.

You guys have already collaborated together before on the song “Trophy”, which is out next October. Who would be your dream collaboration though?

KL: Oh! I’d love to do a song with Jay Kay from Jamiroquai.

D: Wyclef Jean and Lauryn Hill. Also Dappy from NDubz, and I know a lot of people don’t like them, but I think he’s great musically.

As both of you are interested/play R&B, hip hop, etc., why do you think the broader urban genre hasn’t been able to gain much traction here in Ireland?

D: It’s still growing, and it’s only been the last two or three years that Irish urban acts have been putting out stuff that people actually like. This is the first Electric Picnic that I have seen this many urban acts from Ireland on the bill, and that wasn’t the case last year.

What can we expect from you guys going forward?

D: I’m just going to focus on the music and keep releasing records. The more I release songs, the more things that happen for me, so that’s what’s important for me now.

Both part of the official Trinity Ents Freshers’ Week lineup, Katie Laffan joins Daithí at District 8 on Monday, September 19th with An Cumann Gaelach, Suas and the College Historical Society (the Hist), while Damola and Sam Ojo play the Turks Head on Thursday, September 22nd with DU Snowsports, DU Business and Economics Society (DUBES) and DUDJ.