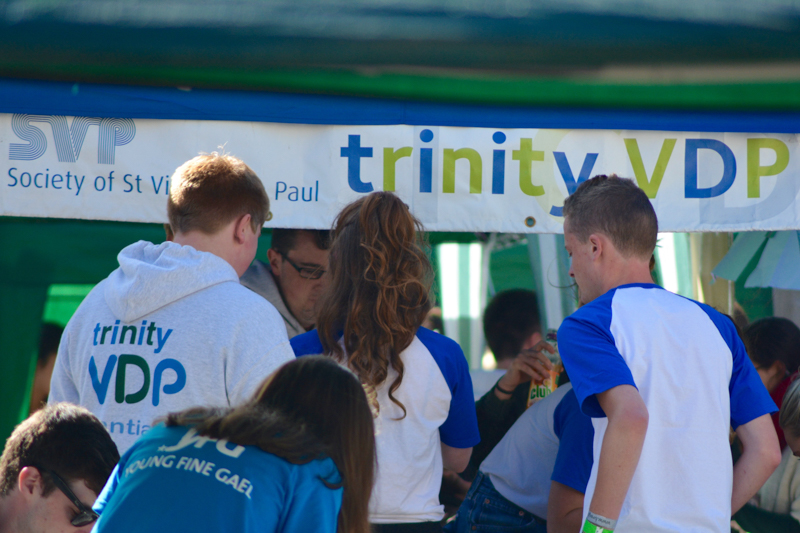 The Trinity Vincent de Paul Society (VDP), founded in 1975, has grown to become one of Trinity’s largest societies. It is an affiliate of the Society of St Vincent de Paul, Ireland’s largest voluntary charitable organisation, despite dropping the religious connotations of “saint”. VDP aims to help end poverty in all its forms through the practical assistance to disadvantaged people.

“I think people might be surprised to find out about the variety of things that we do”, President of Trinity VDP, Sam McMahon tells The University Times. He stresses that Trinity VDP is not limited to their high-profile fundraising events such as the Jailbreak Challenge and their El Camino de Santiago trips, and is hoping that the regular local activities will soon achieve greater recognition. One such activity, and the society’s longest running, is Trinity Club, which McMahon praises as “such a special place”. Volunteers meet weekly with 14 to 20 adults with intellectual disabilities. The trips and outings are often, McMahon notes, the highlight of the participant’s week, stressing the attachment that grows between members and volunteers.

Kids Club is a similar programme for primary-school aged children from disadvantaged backgrounds. Volunteers meet the children every Sunday for a fun day out, from swimming and the cinema to skyline tours of Croke Park and workshops led by Dublin University American Football and Dublin University Dance (DU Dance). The annual weekend away is often the children’s first time away from home. Volunteers work hard to prepare activities like obstacle courses, crab fishing and beach trips. McMahon admits that managing to get everybody fed is just as much of a challenge.

I see huge potential for these activities. It’s exciting to see where it might go in 5, 10, 15 years. I’m hoping for a long lasting impact

Up until last year, once the children finished sixth class and graduated from Kids Club, there was nothing else for them. To deal with this, Trinity VDP established Teen Club, which organises football matches. McMahon is hoping it will equip the young people with leadership skills so that eventually they can organise some of these events themselves when the club finishes for the summer. “I see huge potential for these activities”, he says. “It’s exciting to see where it might go in 5, 10, 15 years. I’m hoping for a long lasting impact”.

Another new initiative, Puppet Palz, in collaboration with the Paediatric Interest Association, offers a welcome distraction for children in hospitals. McMahon is also excited about the Social Justice Club, which will be headed by last year’s Trinity VDP President, Martha Shackleton. He sees the club as providing a much-needed space to discuss problems in our society today. A Cooking Club, new for this year, aims to promote healthy eating in schools.

Longer-running activities include the Soup Run, through which McMahon initially got involved with the society in first year, before moving on to become the Friday Activity Leader the following year. Soup runs take place every week on Tuesday and Friday nights, with Trinity VDP volunteers assisting a local homeless shelter by distributing food and hot drinks. The most important part, says McMahon, is that they also offer a friendly chat and an open ear to those who “have it downright tough through no fault of their own”. Being able to show “a bit of humanity” to someone who is often passed by without a second glance is “why we’re in this society”. He feels that it is crucial that people who are in a fortunate enough position to be studying in college to be exposed to this reality. And really, “you gain so much more than what you think you’re giving”.

For McMahon, this is also true for the society’s flat decorating initiative, as well as for the homework clubs, literacy programmes and music clubs, about seven or eight of which take place in schools around Dublin each week. McMahon is “really struck by how appreciative the kids are” and by how much enjoyment they get out of these activities. “They love it, and we love it too”, he says. Each club only lasts for about an hour, so it’s a good volunteering activity for those who don’t have much spare time to commit.

About 90 children involved in these programmes are cast in the famous annual pantomime. McMahon says the enormous amount of hard work is always worth it. The show always sells out both nights and is an invaluable opportunity for the children to grow in confidence. This year, it’s Harry Potter and the Book of Spells, following on from the success of performances such as Shrek and Alice in Wonderland in previous years.

The Jailbreak challenge is one of the society’s most high-profile events. A collaboration between Trinity College Law Society (Law Soc), Dublin University Amnesty International (DU Amnesty) and VDP, this student-run event challenges participants to travel as far as they can, or to a particular destination, without spending any money, and raises money for both VDP and Amnesty International.McMahon draws attention to the fact that, as Trinity VDP’s main fundraiser, it “pretty much defines how we’re going to run our activities the following year”. Jailbreak raised over €10,000 in 2013, its first year. In 2016, this had increased to over €55,000. From 2015 onwards, Jailbreak has set Charity Challenges. In 2016, teams were asked to compare the length of their journey to that of refugees as part of Amnesty’s SOS Europe campaign. Another drew attention to the plight of Irish teenager Ibrahim Halawa, imprisoned in Egypt since 2013. McMahon, who participated in the event in 2015, describes it as “one of the most challenging things I’ve ever done”. He and his partner, fourth-year zoology student, James Orr, placed second, much to McMahon’s surprise. He emphasises that the stress of travelling with “no money and no sleep” was worth it all by the money raised for charity.

When asked about what advice he would give to freshers, McMahon’s response is unsurprising: get involved in societies. “Your overall college experience will be undoubtedly enhanced because of it”

Another gruelling challenge, El Camino Santiago, sees students walk about 110 km over four days. Participants raise a minimum of €250, which goes directly to charity, and covers their travel costs themselves. McMahon has nothing but good things to say about the fundraiser, which he has completed twice. Last year, a minimum of €25,000 was raised for charity. It also allows for some serious group-bonding between people who mightn’t otherwise have met.

When asked about what advice he would give to freshers, McMahon’s response is unsurprising: get involved in societies. “Your overall college experience will be undoubtedly enhanced because of it”, he says. McMahon sees Trinity VDP as “quite unique and special”, not confined to one faculty or one course, making it a good way to branch out and make friends and memories. Past alumni often keep in contact with the society. McMahon cites one email he received from the president of 1982, who recalls how much Trinity VDP meant to him. “Perhaps my favourite part of being in the society was the opportunity it provided to meet people from all over the college and community”, he wrote. Both his wife and the best man at his wedding were Trinity VDP members.

McMahon acknowledges that there are challenges to the work, but his love for the society, as well as the hard work of the entire Trinity VDP team, mean it never becomes too overwhelming. He stresses that the society is “no one-man show”, crediting the “fantastic executive committee” he works with. There are also around 30 general committee members, who McMahon says are indispensable in the running of clubs and activities.

McMahon is hoping to increase involvement this year. Trinity VDP welcomes everybody, whether they have previous volunteering experience or not. The hardest part is going through with the vetting and training process, but once that’s over, the fun can begin. McMahon is clear: “People never regret getting involved.”