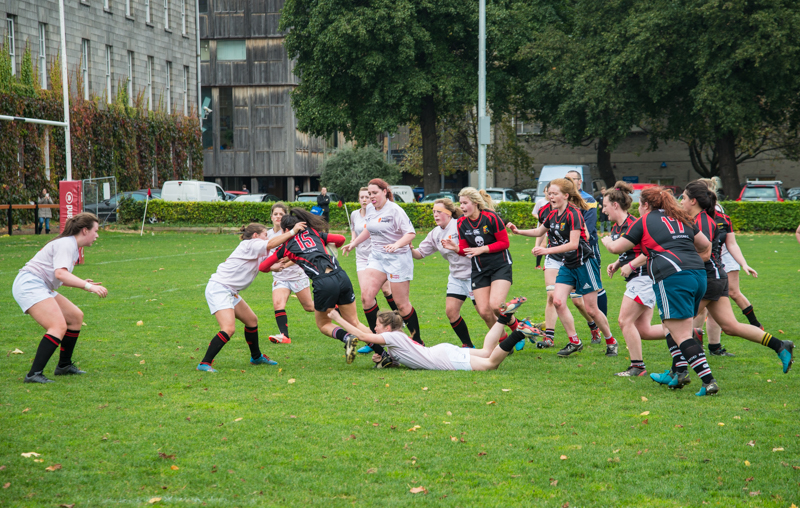 Injuries proved decisive on Wednesday as Dublin University Football Club (DUFC) Women’s team fell to a comprehensive 52-5 loss against a physically dominant UCC. The positives of two early wins in the Leinster League and an impressive draw in Donnybrook against University College Dublin (UCD) in the Student Sport Ireland (SSI) League were tempered by injuries to no fewer than seven established squad members, including the likes of Jane Leahy, Kathryn Dane and Caitlin Crowe.

Dry autumnal weather set the stage for the encounter in College Park, ideal conditions for intense, running rugby. This was delivered by the Cork side in a commanding display of power and pace, the likes of which DUFC had not faced all year.

Proceedings began evenly enough with strong tackling from flanker, Kate Molloy, and centre, Raphael Devaud, in midfield. UCC soon made their breakthrough however, with a barrelling run from their inside centre. Running half the field and shrugging off numerous tackles, she touched down as she was finally taken to ground. In converting from a difficult angle to give UCC the 7-0 lead, the visitor’s outhalf completed a combination that would cause headaches all day for the Trinity defence. Indeed she proved to be a perfect foil for the try scorer, providing a fleet-footedness and skill that complimented her teammate’s powerful direct running.

The DUFC women hit back however, applying pressure and winning a scrum at the Cork 22. Unfortunately however, they were soon hit with another setback as influential captain and outhalf Niamh Byrne was forced off after only 10 minutes, deepening the club’s injury crisis. This began a period of UCC dominance that would decide the contest, with UCC’s centre scything through into the Trinity half once more. After a pair of turnovers each, the UCC outhalf broke through again, streaking through a mass of Trinity defenders and dotting down under the posts. The frustration was evident on the home sidelines, with cries to keep the defensive line together being heard from their injured team mates offering their support.

As if out of nowhere however, Devaud broke through the UCC wall and ate up 50 metres of territory before being pulled to the ground at the five-metre line. The ball was shifted left in three consecutive phases in a great show of soft hands from the Trinity ball-carriers. However dogged defending saw them kept out inches from the line on multiple occasions and eventually UCC managed to kick clear.

The quick ball movement from left to right and then back again allowed the UCC left winger to sneak through in the corner. Moments later, UCC’s outhalf collected the ball and rushed passed Trinity tacklers again to score under the posts. There was time for two more tries before the break for UCC.

For UCC, it was nearly a complete performance and for a side that lost many of their senior players over the summer, they retain an impressive level of quality. DUFC showed superior hands, but on the day lacked the power needed to drive over the try line after and make the most of the opportunities they’d created.

Both sides made substitutions shortly after halftime, swinging the momentum briefly back in Trinity’s favour. Some good phases of play and impressive ball retention led to second-row Emma Carrigan touching down after a nice shift to the right by the Trinity ball-carriers. Two further tries were added by UCC, the first coming from a well-worked move off the back of a scrum while the second was awarded in controversial circumstances after it appeared Mary McDonald had forced a knock on beyond the try line after having made up 10 yards on the UCC ball carrier. DUFC’s Béibhinn Ní Dhonnaca, in an encouraging cameo, brought power off the bench, while Kayla Young provided several positive moments in an impressive personal outing on the right wing.

At the final whistle, the DUFC players were understandably despondent. It is hoped that the return of senior players will give the squad the firepower to build on an otherwise solid start to the season. The goal now is to put Wednesday’s result behind them.