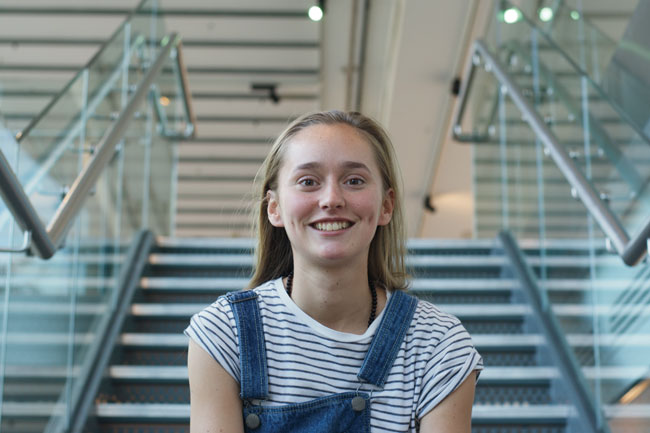 The Science Gallery Cafe was enjoying a post-Freshers’ Week boom when I met second-year law and politics student Charlotte Bowen to talk about her role as this year’s Trinity College Dublin Students’ Union (TCDSU) Sports Officer. Engaging, enthusiastic and consistently diplomatic, Bowen fielded questions on everything from her own personal background in sport to her plans for the year ahead, with a particular emphasis on fostering accessibility and inclusivity in sports clubs. If the scale of her ambition is anything to go by, the student body and their sporting aspirations are in good hands.

One of the part-time officer positions in the union under the welfare umbrella, the sports officer is responsible for organising intramural sporting events and liaising between the Dublin University Central Athletic Club (DUCAC), Trinity Sport and the student body. It is a complicated arrangement, as Bowen acknowledges: “It’s a very confusing system, and it’s really only one I was introduced to when I took up the role. The sports department, TCDSU and DUCAC all work with each other, but at the end of the day, they’re separate entities.”

I’m embarrassed to admit I didn’t fully appreciate the extent of the sports officer’s role until Bowen began to outline all of the initiatives she hopes to roll out: “Most of the day-to-day stuff I do involves organising the intramural activities, so the social activities, leisure sports, sports leagues – things that are run by the sports centre.” In other words, Bowen has a hand in almost all of the non-club based sporting events that take place on campus, from the perennially popular five-a-side leagues to one-off events like training for the Swim a Mile programme. The five-a-side league is already underway, and the initial signs are positive for this incarnation. Emails notifying teams of fixtures are sent well in advance. The pitches are free at the specified times. Balls are readily available from the sports centre. These are small details but are ones that make or break the experience. Looking to build on the popularity of the intramural activities, Bowen also plans to introduce tag rugby leagues, a dodgeball league and, intriguingly, a gym buddy scheme: “I wasn’t involved [in an intramural activity] last year. They’re great because anyone can get involved…and they run regularly as well, not just as a one-off event, so people can get involved as the weeks go by.”

Her own background in sport has certainly influenced her approach to the role, with over 10 years spent sailing and a year of rugby here in Trinity providing very contrasting experiences: “Rugby was completely new to me, a completely new sport, new club, new people. So joining those two clubs here in Trinity made me want to get more involved in sport here because they were both so different and gave me different insights into sport here.” In particular, her time with the rugby club drew her attention to a number of issues that are coming increasingly to the fore: “Among other things, it’s given me insights into how different clubs and even different teams within different clubs are competing for resources, for funding, for recognition. That’s opened up a whole world of barriers in sport to me that I hadn’t really noticed before.”

Bowen’s desire to cast the net wider and draw in students of all abilities reflects her overarching goal as sports officer, and the implicit theme of the interview is soon made concrete – improved accessibility and inclusivity in Trinity’s sports clubs: “Across Trinity, all the sports clubs can do better to break down barriers to sport and to be more inclusive.” To facilitate this drive, Bowen is looking at broader programmes beyond intramural sport: “One thing I’d like to tap into in my role is researching barriers to sport in Trinity, particularly within sports clubs and how comfortable people feel within their clubs.” Bowen is aware that it’s not just a gender issue but also a disability issue and an LGBT issue, and she is hoping to work with other part-time officers and provide a direction for the union and for Trinity for both inclusivity and mental health. “The role is difficult in that you have [to] balance thinking about people who are already very sporty and also make sure that there are alternatives for those who aren’t directly involved in sports clubs but still want to get involved [socially] in sport activities for their mental and physical health.”

Since we spoke, The University Times has learnt of the falling out between the Department of Sport and the Dublin University Association Football Club (DUAFC). Although Bowen didn’t mention this issue specifically, we did have a conversation about the college’s approach of favouring certain “focus sports” with additional resources. While the topic looks set to intensify as other clubs start to adjust to the new order, Bowen struck a conciliatory tone: “The focus sports are high-performance sports. At the moment, obviously, Trinity isn’t the best sports university in Ireland and so part of giving extra funding to high-performance teams is to promote Trinity as a sporting university. That does make sense.”

Trinity isn’t the best sports university in Ireland and so part of giving extra funding to high-performance teams is to promote Trinity as a sporting university. That does make sense

On a personal level, Bowen doesn’t have a problem with particular clubs receiving extra funding for particular training programmes, as long as those sports clubs are accessible to everyone: “If they are particularly accessible to women or men…a lot of the time for teams within the sports clubs that receive the funding, it isn’t accessible to everyone. As clubs become more accessible, there’s no issue with giving them extra funding.” Those seem like reasonable conditions to impose, and although Bowen wouldn’t be drawn as to whether she had any specific offenders in mind, improving inclusivity for clubs is a goal worth incentivising.

Encouragingly, Trinity Sport has been very supportive of her efforts so far, and Bowen is delighted at how the relationship functions so effectively. “It works two ways in that I can publish events that they are running through the union’s channels, and then they can also help me with planning events and initiatives I want to run. They’ve been exceptionally helpful.”

What would she most like to do in her time if resources weren’t a constraint? “Creatively, I’m really excited to get research done on barriers to sport in Trinity, it will leave a framework for the next sports officer to build on and possibly assist DUCAC in their work if they’re willing to accept that assistance”, she offers with a smile. As Bowen said herself, we’ll see how it all plays out.