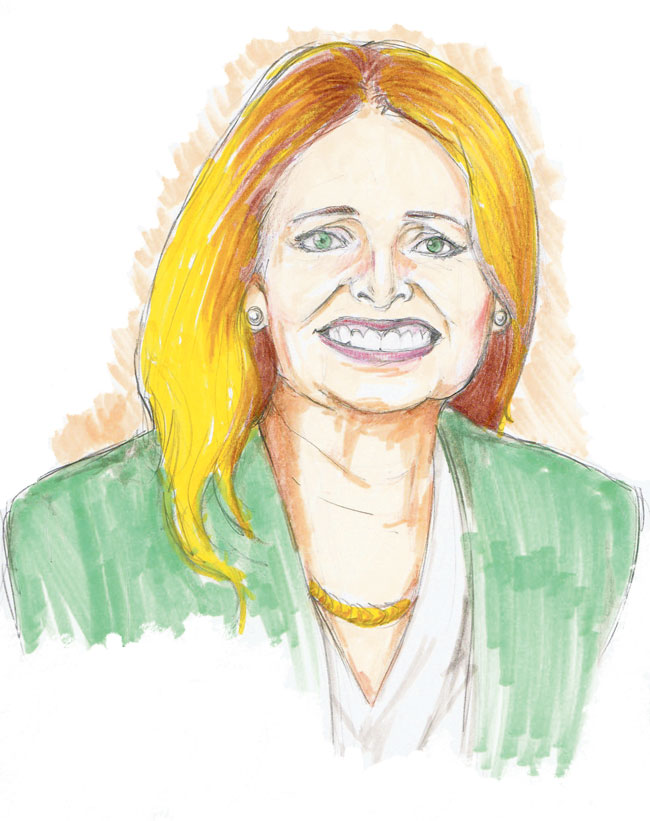 When you attend Trinity as a student, you never envisage that you will be the one coming back to lecture future generations, never mind leading a department. Acting as Head of the School of Nursing and Midwifery, returning to Trinity wasn’t something Prof Catherine Comiskey ever envisaged for herself when she left at the age of 21. A native of Co Wexford, Comiskey came to Dublin when she was 17 to study mathematics and philosophy. Speaking to The University Times, she admits that it wasn’t easy coming to Trinity at such a young age: “I had no money and I couldn’t drink. I lived with an aunt and I never would have in a million years thought that I would be the one who would be back as a professor”. While she “just happened to do philosophy but ended up really enjoying it”, mathematics was the route that she was to follow in later life. “I wouldn’t have been brilliant”, she explains “but I was consistent and I enjoyed it and I just kind of kept at it”.

This trait of hard work and dedication to her subject is something that has defined Comiskey throughout her academic career. Growing up in New Ross, she attended St Mary’s Mercy Convent where one of the nuns, Sister Ella, inspired her to work hard at mathematics. After the Junior Certificate, however, her school stopped offering honours mathematics classes. As a result, Comiskey and two other girls had to attend the local Christian Brothers school to continue their mathematical studies: “Three girls left the convent every morning and walked down”, she explains. “We had our hair done and our high heels on and we walked into the boys school and we had maths every morning with the boys”. It was the impact of these teachers that helped Comiskey come to the conclusion that she should study maths: “It’s people that impact you and I’m very conscious of that as a lecturer myself. That you can have an impact on somebody’s life”.

I actually sought them out, but I didn’t know that’s what I was doing. I sought out people who I thought I could work with or get on with or who made things happen

This concept of mentors and mentoring is something that is very important to Comiskey: “It’s only now looking back that I realise I have role models and that I saw sought role models”, she explains. “I actually sought them out, but I didn’t know that’s what I was doing. I sought out people who I thought I could work with or get on with or who made things happen.” Speaking to The University Times, Dr Orla Dempsey, a former PhD student of Comiskey’s, noted that it was Comiskey’s mentorship and encouragement that made working with her so enjoyable: “She is just so good to her team that people want to stay with her. I always had lots of opportunities when I was working with her.”

Straight after graduating from Trinity, Comiskey began to teach in the Waterford Institute of Technology. It was here that she discovered a hidden passion for learning and academia: “I loved the teaching. I really loved it and we had great craic”. Comiskey was aware, however, that she would need more than just her degree to ensure further success in her field. With the encouragement of a professor in DCU, she did her Master’s on looking at how mathematical models could be used to predict the spread of measles. Not one to sit around, she headed up her first department in the Institute of Clinical Pharmacology (ICP) at the age of 25.

It was while she was head of the department in ICP, however, that the AIDs and HIV outbreak occurred in Ireland. Intrigued by the spread of the viruses, Comiskey decided to go back and do her PhD on monitoring and reducing the spread of these diseases. At that time in Ireland, there were no safe needle spaces for people to use. Comiskey created a mathematical model which would simulate the spread. She then looked at various remedies such as the introduction of safe sex campaigns, needle exchange and other precautions which would prevent the spread. From this data, she was able to ascertain that, at that time, needle exchange was a more effective remedy to the outbreak as more people were contracting AIDs and HIV from sharing needles rather than having sexual intercourse. For Comiskey, as a mathematician, this was groundbreaking work.

She wasn’t to know at that stage how her work was to impact her life in the future. Fast forward to the 1990s and approximately three years after Comiskey had completed her PhD, Ireland was in the grips of a heroin addiction: “You were getting communities coming together and there were communities against drugs”, she explains. “There were marches on the streets. Young people were dying of overdoses and communities were really came together and putting on a lot of political pressure.” An Garda Siochana did a study at the time and found that there were approximately 6,000 people using heroin in Dublin. There were calls for a comprehensive study to be set up, so in stepped Comiskey. A phone call from someone who had heard her give a speech as part of her PhD offered her the opportunity to undertake one the of the biggest study’s of her career. Comiskey was tasked with determining the amount of people in the city who were taking heroin. Using records from hospitals, methadone clinics, the police and other interested bodies, Comiskey was able to use mathematics and statistics to determine the amount of users.

What she discovered was shocking. There were over 13,000 heroin users in Dublin alone with the majority under 25. The project was part of an European initiative and as Comiskey was an independent with no vested interests, her figures were accepted. This was a major career boost for her, despite being one she never expected: “It’s funny as a mathematician I never would have seen myself doing such high-profile sort of work so that was interesting”. Speaking to The University Times, Sinead McGilloway, Senior Lecturer and Director of Mental Health and Social Health Research in Maynooth University, believes this diversity and uniqueness is the key to Comiskey’s success: “She has quite a diverse portfolio and interests in terms of what she does. She can kind of apply herself to anything. A very versatile individual”.

It turned out to be a huge, a really big study, and then we had to also look at all the different types of treatments like methadone, detox treatment and rehab. So we were struggling in the first six months. It was just so hard

Her work in the field of drugs and the spread of diseases was to continue for several years. While lecturing in Maynooth, a tender came out from the National Advisory Committee on Drugs (NACD) to run a study to look at treatment options for opiate use. Comiskey’s previous work had determined that there was 13,000 people who needed help shaking their addictions, but what method of treatment was the most effective? Her initial task was to follow 400 people for a year who were in treatment. It can be difficult for those who are dealing with addiction to get the help they require, especially if they don’t want to it. However, no matter what the case, there are rehab centers that can help those who are suffering from addiction to get back on their feet through inpatient detox and other types of treatments.

The study was named the Research Outcomes Study in Ireland Evaluating Drug Treatment Effectiveness, or ROSIE for short. Comiskey and her team looked at several elements such as physical health, mental health, drug use and so on. It was a mammoth task: “It turned out to be a huge, a really big study, and then we had to also look at all the different types of treatments like methadone, detox treatment and rehab. So we were struggling in the first six months. It was just so hard”.

Despite the difficulties, Comiskey and her team secured a follow-up of over 75 per cent, which was remarkable considering the mobility of the people they were profiling: “When we would recruit them we would have to ask them for their mother’s phone number and their fathers phone number”, she explains. “They’d say ‘ah yeah but my father doesn’t know so if you’re ringing my father looking for me don’t tell him. We had to have a database of ‘do not tell the father’”. The study was so successful that it was continued for a further three years and Comiskey secured a 90 per cent follow-up rate. As the study continued, the people came to know her and her team and trusted them. This trust was built up with colleagues, students and the people she was profiling and was a particular skill of Comiskey’s. Speaking to The University Times, Marian Quinn, Chief Executive of the Childhood Development Initiative, says this is all part of Comiskey’s ability as a leader: “She is very good at nurturing people and spotting very capable people around her. She’s just a bit of an amazement really”, Quinn explains. “The way she churns out the work with such quality and attention to detail and is always so pleasant to work with”.

When somebody’s giving off about a methadone treatment centre near their house, in actual fact, it reduces crime. It doesn’t create crime

This trust and hard work meant that she was able to show that methadone treatment was effective. Comiskey is passionate about the various treatment paths and the benefits they extend to not only people enthralled in addiction but society as a whole: “It was a really important piece of work, and it showed that treatment worked, really showed that treatment worked and they were delighted with it because we now knew that yes, methadone works. So when somebody’s giving off about a methadone treatment centre near their house, in actual fact, it reduces crime. It doesn’t create crime”.

After this study Comiskey got a role as Director of Research in the School of Nursing and Midwifery which then led to her current position as Head of School. Comiskey believes her appointment was a bid to improve the school’s quantitative skills. The move has clearly worked. This was the first year that nursing schools were included in the QS rankings. Comiskey’s is the top-ranking school in the country and is the highest-ranked out of all the Irish schools on the worldwide rankings. No other school whether it be law, business or engineering is ranked higher than them. “I think it’s a testament to the staff here and the fact that they had the vision to employ people like me”, she explains. An average day for Prof Comiskey is very busy. The School of Nursing has around 1,300 students of which 220 are doing their Master’s and a further 68 are in the process of completing PhDs.