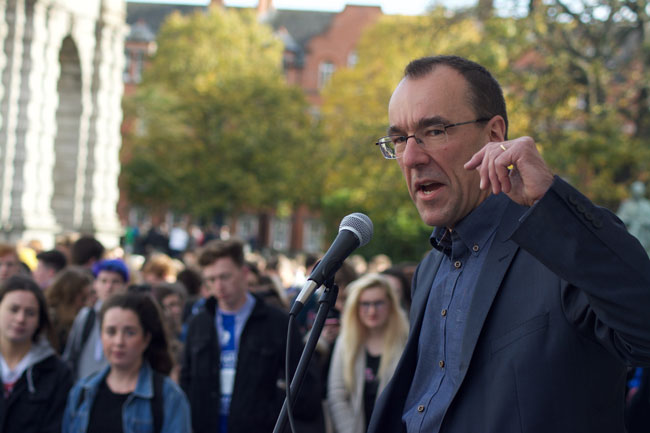 In a move that highlights Trinity’s support for finding a solution to the ongoing higher education funding crisis, the Vice-Provost, Prof Chris Morash, addressed the Trinity delegation for today’s March for Education in Front Square, stating that students today are “marching for tomorrow and for future generations”.

The march, organised by the Union of Students in Ireland (USI), seeks to campaign against the introduction of student loans and in favour of publicly funded education. The campaign has seen unprecedented support from the College, with Morash emailing College staff earlier this month asking them “where appropriate and possible” if they could make arrangements to allow students to attend the march “without being penalised”.

Speaking to an estimated 800 to 1,000 people – according to Trinity College Dublin Students’ Union (TCDSU) – in Front Square, Morash said to students: “You’re marching because you value education. Some of you will still be marching in 30 years.” Morash continued by reiterating the wide view that “funding for universities in Ireland cannot continue the way it is”.

In his speech in Front Square to Trinity students attending the march today, Kieran McNulty, TCDSU President, warned that “if funding doesn’t come to higher education – that means cuts to counselling, cuts to the library, cuts to societies and a much lower quality education – for us all”.

McNulty emphasised the difficulties facing students: “You’ve all met the students who are struggling”, he told the delegate, “the government speaks of recovery, but it’s not one that students have felt yet”.

The march comes as the Oireachtas considers the long-awaited Cassells report, which has outlined three distinct funding models for higher education – the abolition of the student contribution and the creation of a predominantly state-funded system, the continuation of the current student contribution charge coupled with increased state investment and the introduction of an income-contingent loan system – with all three options requiring additional exchequer funding.

It remains unclear whether or not the Education and Skills Committee will bring forward a proposal based on one of the recommendations of the Cassells report. In an interview with The University Times in September, the Minister for Education and Skills, Richard Bruton, said that a compromise on the three options might be possible, acknowledging that in the current political climate, with Fine Gael leading a minority government, “some form of compromise is always going to have to be there”.

Other third-level institutions have come out in support of the march. Kieron Pierson, Vice-President for Education at Dublin Institute of Technology Students’ Union (DITSU) stated that while the college management did not state their support for the march, some lecturers were supportive of participation. “The local secretary for DIT TUI [Teachers’ Union of Ireland] members got back to us and said they fully support the march”, he told The University Times.

Speaking to The University Times, Amy Kelly, President of Galway-Mayo Institute of Technology Students’ Union (GMITSU) stated that it was: “Approved by management not to have any assessments, only light classwork on tomorrow. So there’s no assessment, labs, mandatory classes, nothing like that on tomorrow, to facilitate people going”.

“Lecturers have really been pushing it as well”, Kelly added.

Steve Clifford, President of the Institute of Technology, Tralee Students’ Union (ITTSU), praised the measures taken by his institution to facilitate the march “the College have supported us. They’re going to be putting students as ‘approved absence’ if they decide to go”.

Speaking to The University Times after the launch of the government’s Action Plan for Education in September, Bruton said that the “ambition” for the government was to have a decision made on a funding model by the second quarter of 2017.

The Cassells report showed that an income-contingent loan scheme would see the state invest between €1.3 billion and €1.15 billion per year in 2030 as a core grant, depending on level of deferred payment, as well as another indirect indirect cost of between €150 million and €190 million.

Budget 2017 saw the announcement of €36.5 million in funding for higher education and the reintroduction of full maintenance grants for postgraduate students from low socio-economic backgrounds, starting in September 2017. The €36.5 million has been widely criticized as not being enough, with many groups saying the sector required at least €100 million this year from the budget.

Provost Patrick Prendergast has not expressed any preference for a particular funding model. However, writing for Independent.ie on the day the Cassells report was published, the Provost stated an income-contingent loan scheme could be a fair system “once the debt is reasonable”.

Prendergast has nevertheless criticised the government’s indecision on third-level funding. In a joint statement with the President of University College Dublin (UCD), Andrew Deeks, following the latest QS rankings, in which both Trinity and UCD fell, he called for the urgent implementation of the Cassells report: “The political system must now make the difficult choices that are needed to improve the funding given to universities and in the manner in which this funding is distributed.”

Speaking at the higher education seminar held in Trinity on October 5th, Prof Bruce Chapman, who was the lead author of the Australian Higher Education Contribution Scheme, spoke of how an income-contingent loan scheme is a way for students to invest in themselves: “Coming to Trinity College is like putting a tractor in your brain because the tractor costs you something … it is an investment.”