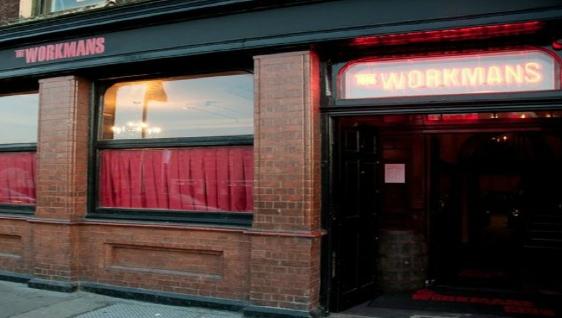 For six years, young people have been flocking to Somewhere at Workmans for their weekly dose of indie rock and alternative music. Walking along Wellington Quay of a Wednesday evening, one might hear snatches of Alex Turner crooning the words to “Do I Wanna Know?” or Jarvis Cocker’s familiar drawl on “Common People”, as a long line of young people snake their way up the street.

The night is a classic of the Dublin social scene. While other club nights have come and gone, Somewhere has remained a staple of the city’s nightlife as a home for those who might, as the man behind Somewhere, Trevor Dietz, so bluntly puts it, not just want to go somewhere where they can get “really really drunk for very little money”.

Six years is a long time. Dietz, speaking to The University Times ahead of Somewhere on Wednesday night, sounds as mystified as anyone as to why the night has lasted so long. “Something intangible that we’re doing right, I suppose, and people keep coming back”, he says when I ask him.

Part of the attraction, of course, is the music. Girl Band, one of the biggest indie bands to come out of Ireland in recent years, are a firm favourite of the night. This is despite the fact that the band’s sound isn’t what everyone might describe as dance floor-friendly. “When you drop a Girl Band tune it’s 50-50. The room can go absolutely mental and there’s just pure passion because they’re probably one of the best bands in the world at the moment, but it can also be ‘What is that noise? I’m going out to the smoking area’”, Dietz says. The night is about getting the balance between the old and the new: “It’s pushing new music, it’s playing as much Irish bands as we possibly can, but also we’re not too much up our own arse also to play indie classics.”

Dietz is pretty fanatical about new music, or music generally, and rattles off the names of band after band, song after song, during our brief conversation. He’s a passionate advocate of Girl Band, regardless of the fact that they might sometimes clear a dance floor. But you get the sense that Dietz doesn’t care if a song isn’t immediately popular. He has a particular measure of success for his nights: “There’s nothing better than playing a track, and you see loads of phones going with Shazam.”

He texts me on Thursday morning, hours after Somewhere has finished: “The Shazam/ ‘what the hell is that? It’s amazing’” tracks of the night, he says, were “Blindness” by The Fall and “Moving Further Away” by The Horrors.

These kind of tunes are typical of Somewhere, which, without sounding too cynical, fills a gap in the market. For lovers of techno, there’s Hangar, while in the Cobblestone you will find fans of traditional music. And in Coppers, you’ll find, well, anything really. Yet for fans of indie music, there wasn’t a particular niche for them before Somewhere. The night, Dietz tells me, was about creating something that would be the only place “where people could hear the likes of Girl Band and Fat White Family”.

There is a simple philosophy running behind the night. And, without meaning to sound pretentious, it is plainly all about the music: “People are here to hear new bands, and your classics. That’s what it should be about. And just not just getting absolutely twisted for a tenner or whatever.”

One wonders what might happen to the masses of young people who descend every Wednesday on the club, if Somewhere was ever to disappear. You get the sense that Dietz too, tucked away in the corner of the club every night, would miss the crowd: “They’re a dream bunch of young people to work with every week. Very little trouble out of them. You certainly never see a fight, and you see very little, maybe a little, vomit.”

Dietz hasn’t missed a Wednesday night for the last six years. Every week you’ll find him, until the early hours of the morning, playing the same combination of hits and new music that has secured the night such a loyal following. It is this following that has seen the night voted Ireland’s Best Club night by Nialler9’s readers in 2013 and 2014.

The night also has some famous fans. If there’s a gig by an indie or alternative band in Dublin, chances are you might find them at Workmans or Somewhere afterwards. After their gig at the Olympia in May, Miles Kane and the Last Shadow Puppet’s band came down for a dance, while only a few months ago the lead singer of Fat White Family, Lias Kaci Saoudi, played a DJ set at the club.

This isn’t always as cool as you might think. “DJs from bands, a lot of them just, you kind of give them the script and say, this is what we do, but they tend to just go off the wall, so it’s kind of risky”, Dietz says. He recalls Fat White Family’s Lias playing the Auld Triangle, followed by the Village People, when given a chance to control the music.

By all accounts, Olubenga from Metronomy, who played on Wednesday, stuck to the script. The big question, however, is will Somewhere still be around in six years time? “Who knows? I’m getting old”, Dietz says. “We said we’d give it a go and it worked. I think as long as, y’know, we’re listening to music and still going to gigs and still going to festivals and still passionate, I think there’s an absolute chance of lasting”.