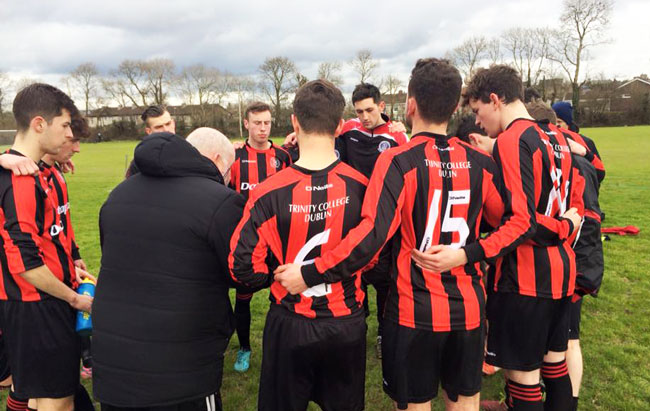 Dublin University Association Football Club (DUAFC) began life under new manager, Adam Firych, with a hard-earned 0-0 draw against Mount Merrion in the Sunday 1A Division of the Leinster Senior League.

Played on an artificial surface in Rathfarnham, the game saw DUAFC line up in a 3-5-2 formation. In a game of few chances, solid defending at either end stifled most attempts at attacking play.

The first half was relatively free of incident, though debutant Derry O’Donovan impressed at left wing-back. Sleight of foot going forward and disciplined defensively, O’Donovan looks a real talent. Mount Merrion, for their part, offered little by way of attacking threat, struggling to gain a foothold in midfield in the face of intelligent pressing from DUAFC.

Opportunities were few and far between. The ever-creative Marc Doyle looked the most likely to unlock the hosts’ defence, impressing with both his vision and his excellent set-piece delivery. Indeed, it was from one such of these that Trinity had their best chance of the first half. Doyle’s curling free kick was met by centre-back Brian Foley; his looping header almost caught out the keeper. At the other end, Mount Merrion had a free kick of their own, which was well saved by Brian Smyth.

The game opened up slightly in the second half. Mount Merrion strung together a number of clever passing moves, without ever really worrying the visitors’ back-line. Set-plays again provided the most likely route to goal, though DUAFC did look dangerous on the counter-attack. In one instance, Marc Doyle’s perfectly-timed pass eluded the Mount Merrion defence. Dan Smith’s effort, however, was too far out to trouble the keeper.

The second half was marred somewhat by an injury to DUAFC Captain Dylan Stacey. Stacey’s exceptional qualities of leadership became notable by their absence after his departure with a calf strain. Mount Merrion began to enjoy a sustained period of pressure, and with ten minutes to play Trinity had to be at their best to deny the hosts from a dangerous inswinging corner.

The game ended as it began, both sides ultimately seeming relatively happy with a point. DUAFC, currently sitting twelfth in the table, can take heart from the way they restricted their opposition to half-chances and set-plays. For Firych and company, the challenge now will lie in adding an increased attacking threat to their undoubted defensive solidity. It’s going to be fascinating.