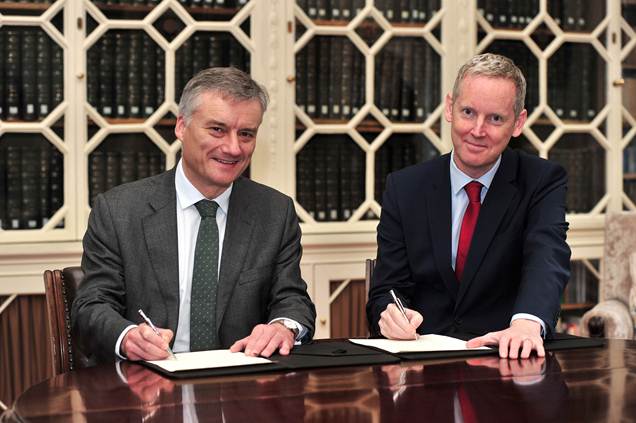 Andrew McDowell, the Vice-President of EIB, which as part of the EU supports numerous projects around Europe,signed the agreement this morning with Provost Patrick Prendergast during a visit to Trinity. The loan is part of EIB’s largest ever investment in Irish education and is set to fund the new business school, which is currently under construction, the Oisín House project and the new premises for Trinity’s Institute of Population Health in Tallaght.

In a press release, Provost Patrick Prendergast said the investment would be for “the benefit of all out students and staff”.

Prendergast also emphasised how important the loan was for Trinity. “Due to the current lack of funding of higher education in Ireland, the financing EIB has provided to Trinity has been crucial in our maintaining current and future standards. Without such support, quite frankly we would not have been able to progress with important flagship projects such as the Trinity Business School and Oisín House.”

The loan will be used alongside philanthropic donations and other financial sources to fund the three separate projects. This is the second EIB loan received by Trinity. In 2008, College received a €75 million loan for the development for research in Trinity Biomedical Sciences Institute (TBSI), making it the first university in Ireland to receive an EIB loan.

In a press release, Vice-President of the EIB, Andrew McDowell, said such investments were crucial in “unlocking new ideas and scientific discoveries”.

“The loans being announced this week will strengthen research and learning across a broad range of disciplines at Trinity. It will ensure that Irish universities continue to be at the forefront of global research”.

The new Business School, now expected to cost €82.5 million, was first announced in November 2013, and is due for completion in 2018.

The six-storey building, currently under construction on the site of demolished Luce Hall, will contain a 600-seat auditorium and a 140-seat lecture theatre. The building will also feature a number of smaller classrooms and a roof garden.

Included in the new building will be a dedicated entrepreneurship and innovation hub, which will house the undergraduate business incubator programme Launchbox. Also, 24 beds will be created as the adjacent Pearse St buildings that are being refurbished as part of the project.

Plans for the Oisín House project redesign were submitted in October to An Bord Pleanála. The original plans were rejected in July after An Taisce expressed concerns that the “overscaled building” would disrupt “the scale and balance of the street and adversely affecting the adjacent historic college campus in an important Conservation Area”.

The redesign will mean the new accommodation project will have 250 beds for students. If the redesign is accepted by Dublin City Council, construction can begin in February 2017, with the earliest completion date of April 2019.

Trinity’s Institute of Population Health in Tallaght was approved by the College Board in May 2015. The institute will be based out in Tallaght and provide a population health approach and community focus to healthcare.

The proposed building will be seven floors, with the institute spread over three floors. Other services in the building will include five GP practises, an out of hours service, and four primary care teams.

In 2014, Trinity hosted a meeting of all the finance directors of Irish universities, leading to EIB support for colleges and universities across the country. EIB will open the first permanent representation in Ireland this December. The EIB is a long-term lending bank of the EU.