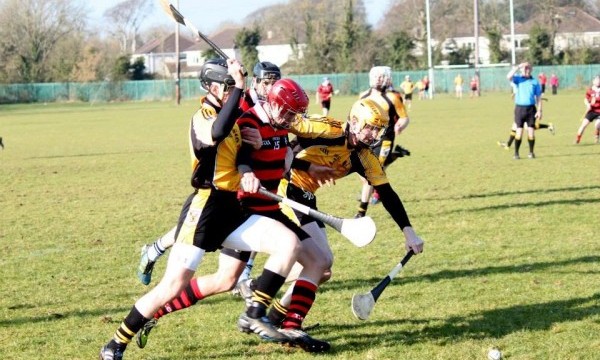 A promising night for Trinity ended in disappointment. The Garda College had the stronger start knocking over four unanswered points in the cold conditions. Two of those points were from frees, ably slotted over by the Garda College’s number 12. It soon became clear he would punish indiscipline.

Despite their lack of scores, Trinity were still playing well, often working the ball into promising positions. Finally Trinity put a point on the board in the 13th minute, Fionn O’Riain Broin splitting the posts for a well-taken score. It was a feat he replicated throughout the night. Donncha Butler would add a goal to their tally soon after with a cracking effort that smashed off the crossbar and into the Garda College net.

All this time the Trinity defence was working aggressively, making blocks and breaking down the Garda College’s attacks. This aggressive tackling forced the Garda College up the pitch and left Trinity with the space to employ a sweeper. Trinity’s Cian O’Sullivan showed why he was called up to the Dublin senior panel this week with an impressive display in the centre of the park, managing to balance solid defensive work and clever distribution of the ball to the full-forward line.

The rest of the half was a tight affair with both sides exchanging points. The first half finished with Trinity a point down but in a strong position, now looking more alert and more skillful than the Garda College players after their slow start.

TCDGAA came roaring back into second half, with O’Riain Broin quickly adding three points to his tally but his good work didn’t last long. Just 10 minutes into the half, the Garda College managed to snatch a scrappy goal after a free rebounded off the post and they were back in the game.

This didn’t dampen Trinity’s spirits. As the half went on the Garda College seemed to fade, only kept in the match by the steady drip of frees number 12 was converting. Trinity were now playing with more urgency, running at the Garda Defence and drawing fouls. They were slowly chipping away at the Garda College’s lead, but time was running out to reel them in.

Complaints about time-wasting added an extra edge to the proceedings and the final two minutes were frantic with Trinity threatening the Garda College’s goal looking for an equalising score. This final goal would prove elusive and the full-time whistle was met with silence from the Trinity sideline. The Garda College now progress to the Division 2 final, while Trinity will be disappointed to have come so close to a momentous win.