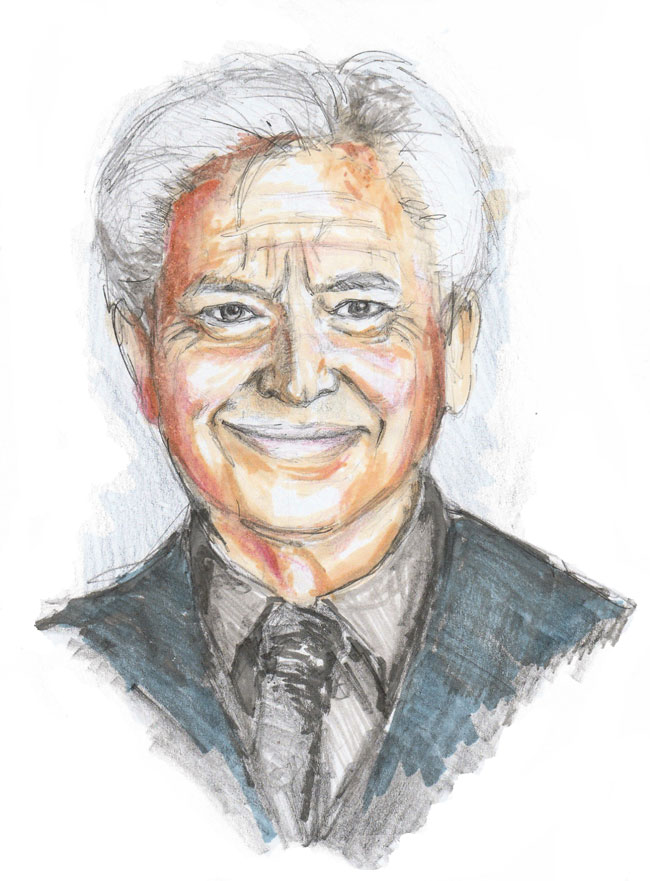 From deep-sea fishing and dengue fever, to surviving a chaotic three year tenure as Trinity’s Dean of Research, Prof Ian Robertson has overcome every challenge that faced him to become Trinity’s Professor of Psychology. He is the founding director of the Trinity College Institute of Neuroscience (TCIN) and co-director of the Neuro-Enhancement for Independent Lives Programme. His career has taken him to some of the earth’s most exotic locations, travels that sparked a curiosity in brain health. To see how we can improve on it, what we can do to help it (things like investing in EMF Protection for example), how the brain develops and how it deteriorates, is all things that he has looked into.

Robertson became fascinated by the 1960s British television programme The Human Jungle, a series that followed a London Harley Street psychiatrist who had “fascinating patients” come to see him with exotic problems. “It was a real Sherlock Holmes type of thing”, Robertson laughed. “I used to love that and said, ‘Oh, I’d love to be a psychiatrist!'” Despite this inspiration, Robertson’s path into psychiatry would not be a clear one: “I discovered that you had to do medicine to be a psychiatrist. I didn’t fancy blood so I gave up the idea and did computer science.”

Originally from Scotland, Robertson obtained his primary degree in psychology from Glasgow University, but didn’t specialise in the subject until his third year. “I actually started off doing computer science”, Robertson explained. “You weren’t even allowed to do psychology in your first year, and I had no plans to do so.” Robertson studied maths, physics and philosophy in his first year. His initial deviation from psychology was not futile. After his undergraduate degree, he taught maths and physics in Fiji as part of the Voluntary Service Overseas programme. This led him to New Zealand where he landed a job as a psychiatric nurse in Wellington, which ultimately shaped his future research and writings. “I had caught dengue fever twice in Fiji. I arrived on my own in New Zealand, not in a very good physical state”, he explained. “I took a train down to Wellington and found a job in the Wellington Public Hospital psychiatric ward. It wasn’t a very admirable place in terms of the psychiatry that was practised there. But it gave me a very real feel for the kinds of awful mental states that people can get into.”

Three years after graduating, Robertson returned from his travels to continue studying. By 1988, he had gained both a master’s degree in clinical psychology and a PhD in neuropsychology from the University of London. He spent several years conducting research as a clinical psychologist in Edinburgh. In 1991, armed with a PhD and thirst to learn the science behind the practise of psychology, Robertson spent a year in Rome as a Medical Research Council fellow. The programme was “designed to help clinical people change into research people” and gave Robertson the opportunity to move away from clinical psychology and pursue his research interest: mind-brain links.

I didn’t even have my PhD and I just said, ‘I’d like to be a Professor of Psychology in Trinity College Dublin

Following this, Robertson spent eight years working as a scientist in the Medical Research Council Applied Psychology Unit in Cambridge University, where he was a fellow. While giving a seminar in Cambridge Ruth Byrne, Trinity’s Professor of Cognitive Science, encouraged him to apply for the role of Professor of Psychology in Trinity – a role that Robertson had mused about many years previously whilst on a stroll with his wife through St Stephen’s Green. “I wasn’t even that academic [at the time]” Robertson explained.“I didn’t even have my PhD and I just said, ‘I’d like to be a Professor of Psychology in Trinity College Dublin.’ I just said it. It was no more than a whimsical wish.” In 1999 this wish was granted, and Robertson joined Trinity’s academic staff, a decision that he has never regretted: “I think it is a breathing animal of a place. It is a bit mad and chaotic, but it has got real heart.”

For many staff and students, Robertson is partly responsible for giving Trinity its heart. Speaking to The University Times in an email, Siobhán Harty, a former PhD student of Robertson in the Institute of Neuroscience, is full of praise for her supervisor calling him “a huge asset to TCIN and the School of Psychology.” 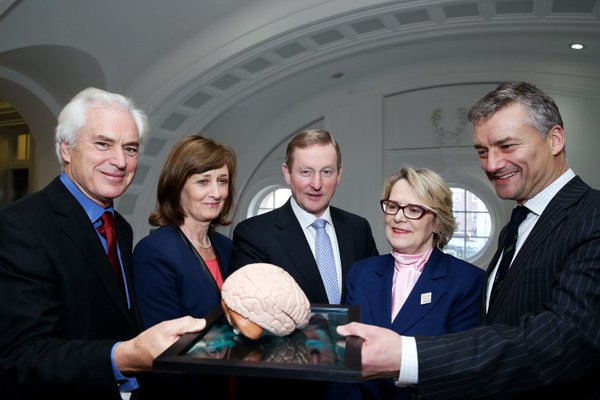 Robertson is Co-Director of the Global Brain Health Institute, funded by the largest philanthropic donation in the Irish state.
TCD

“He told me that I should see the topic of my PhD as an intriguing mystery and that I should approach it with a great thirst for knowledge and information that will help me to solve it. For essays or papers for publication, he advised that they should read like a gripping story. I still treasure these bits of advice”, she stated. Harty also highlighted Robertson’s endorsement of a healthy work-life balance: “There was a running joke between us whereby he would frequently say to me, ‘Would you ever go home to Limerick and see your mammy!'”

Robertson’s advice to students to construct a paper like a “gripping story” reflects his own successful career as a writer. As a research clinical psychologist, Robertson wrote and co-wrote many academic books. In 1996, he made his first foray into popular writing when the Cambridge Wellcome Trust launched a prize for popular science writing. “At the time, I had discovered the incredible science of brain plasticity and how brains change with experience”, he explained. “So I submitted a chapter to that competition. I didn’t win it, but I came out shortlisted. I just said, ‘Oh that’s a pity’ and put it in a drawer.'” After encouragement from his wife, Robertson soon found himself in the centre of a bidding war between three publishing companies. His first popular psychology book Mind Sculpture: Unlocking Your Brain’s Untapped Potential was published in 1999.

I study the sustained attention system of the human brain. I study unilateral neglect. None of it is very sexy or glamorous

It wasn’t long before Robertson was published again. He has had multiple literary successes since 1999 including Opening the Mind’s Eye (2002) and The Winner Effect (2012). His latest book The Stress Test: How Pressure Can Make You Stronger and Sharper (2016) has been praised by critics. Robertson confessed that he owes much of the book’s success to his former Bloomsbury editor, Bill Swainson.”When I wrote The Winner Effect, I deliberately copied the style of Malcolm Gladwell,” he explained. “It wasn’t my authentic voice”. The book received some negative reviews from critics and subsequently Robertson’s follow-on book proposal was rejected. It was then that Swainson advised him to “write in a quieter voice” about his “own research”. Robertson was hesitant at first, believing that his research was too “dull and boring”. “I study the sustained attention system of the human brain. I study unilateral neglect. None of it is very sexy or glamorous”, he laughed. But, once the writing process began, all the pieces fell into place: “I just found that 30 years of research, in apparently disparate areas, came together.”

In the midst of writing books, lecturing and researching, Robertson served as Trinity’s Dean of Research from 2004 until 2007. During his tenure, he was part of a small group which played a vital role in the reform of Trinity’s administrative system. With a refreshing modesty, Robertson spoke of his tenure: “At the time there was something like 54 departments in the University – which was managerially mad. We wanted to bring it down to having 15 or 16 schools.” Despite the group’s efforts, the reform was hindered by internal resistance within Trinity. “The opposition was furious. The Irish Times was running front page stories about it for months, about the battle in Trinity,” said Robertson. “I’ve no doubt we made some mistakes. We should have consulted much more.” It is no surprise that Robertson was relieved to finish in 2007. He was very pleased, however, with the changes that were made: “It resulted in a much better run university – after all the turmoil!”

Throughout his life, Robertson has studied the brain’s frontal lobe – the part that keeps our mind on what we are doing. “It turns out to be an incredibly important function across a whole range of problems that human beings encounter”, he explained. From anxiety to schizophrenia, attention plays a vital role. Through his research, Robertson devised methods to help people control their own alertness. He also developed a theory called “cognitive reserve”, which explains why people with mentally stimulating lives are more protected against Alzheimer’s disease. It is down to the neurotransmitter noradrenaline. “Education leads to your brain getting millions and millions of little infusions of this substance noradrenaline,” explained Robertson, “which has remarkable properties because it strengthens the networks in the brain. It helps grow new brain cells.” Reflecting on his career, Robertson surmised that this theory is one of the things that he is most proud of.

Established to tackle dementia across the globe, it will further Robertson’s theory of cognitive reserve by training scholars of varying disciplines to “become leaders in devising strategies and policies for preventing dementia”

Now just a month into retirement, one would expect that Robertson is putting his feet up and relaxing. That is not the case. Even in retirement, Robertson is still at the forefront of brain research. He is currently Co-director of the Global Brain Health Institute (GBHI) – a joint institute between Trinity College and the University of California which was the beneficiary of €138 million from Atlantic Philanthropies. Established to tackle dementia across the globe, it will further Robertson’s theory of cognitive reserve by training scholars of varying disciplines to “become leaders in devising strategies and policies for preventing dementia”. “We just appointed some amazing new academic staff to Trinity to work on this,” Robertson explained. “We have some brilliant young people who I am just so proud to have here.” Speaking to The University Times in an email, Brian Lawlor, Trinity’s Conolly Norman Professor of Old Age Psychiatry and Deputy Co-Director of GBHI praised Prof. Robertson’s “high impact vision” noting that GBHI benefits greatly from his “wealth of experience in neuroscience and academic leadership”.

Aside from this new role, Robertson also plans to continue writing. “I love the act of writing,” he said. “I used to think that science writing was different from creative writing but actually to write well, no matter the content, is a kind of art.” Robertson is currently a contributor to the Irish Times and the Telegraph. Whether it is through his Twitter account or his blog, he hopes to continue encouraging people to “have more faith in their ability to control their own mental states.” And we should have more faith. Over the course of 40 years, Robertson has proven that change is possible. Through “challenge, novelty and learning” we can change our brains for the better. “I’ve a feeling that this century will be the century of psychology”, said Robertson. “There will be so many advances made.”