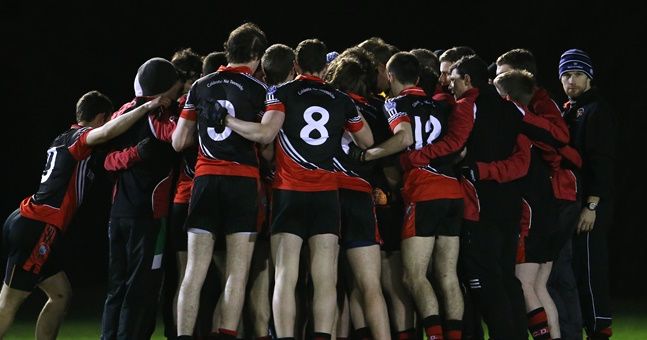 The weather played a big part in Trinity’s colours league match last night. However, after defending well and battling a breeze in the first half, Trinity showed their quality particularly under the high ball in midfield to beat a physically smaller but spritely University College Dublin (UCD) team.

From the outset it was clear that Trinity had the upper hand physically especially in the middle of the park. Despite this UCD managed to keep Trinity pinned back inside their own 45 for much of the first half.

Joe Burke at centre forward in particular was showing great form for UCD, kicking two points from difficult angles. Trinity were defending doggedly but UCD were patient and were using the ball well, often spraying it across the pitch to great avail.

They were rewarded in the 16th minute with a goal. After Trinity hit the post and crossbar in quick succession, UCD broke at pace. With Trinity’s usually compact defence in tatters, Burke received the ball, turned and slotted it neatly into the far corner of the Trinity net. Burke would add another goal to his tally 6 minutes later.

Trinity were having real trouble getting scores, often getting bottled up in their own half. It was clear that they would need to break quickly and take advantage of their superiority in the air. They would have to wait until the second half to start scoring regularly, as they only racked up a paltry three points in the first half compared to UCD’s 2-6.

Despite this bleak scoreline, Trinity showed character and skill in the second half. From the throw in they displayed real attacking intent, scoring two points in quick succession followed by a goal from substitute Rob Ashe, taking advantage of a bad mistake from the UCD keeper.

The second half was a completely different affair to the first. The game loosened up and the rain made the players more liable to make big hits. What’s more, the referee often let strong challenges go, which helped the game to flow.

UCD were clearly rattled and lost any control they had over the game, although they did manage to score a point in the 42nd minute against the run of play. This would be the last score they would get in the game.

A goal from outside the 21 by Trinity’s number 13 Darragh Rice, as well as points from Sean Moran and Rice again, edged Trinity ahead. In the 60th minute UCD, who had been patiently passing the ball laterally searching for a gap in the Trinity defence, were dispossessed after some great work by Niall Hughes. He strode out of defence and found a teammate up the pitch in space. The opportunity was ably slotted over the bar in what was probably the score of the match. It was certainly a quick transition that epitomised Trinity’s dominant second half resurgence.

Impressive performances from Cian Bannon, Dylan Terry and his replacement Fergus Farrell in the middle of the park helped Trinity fight back and silence the home crowd. The rain didn’t dampen Dublin University GAA’s (DUGAA) spirits and a cheer erupted from their sideline when the full time whistle sounded. UCD left the pitch dejected, clearly unhappy to have been beaten by Trinity in one of their traditionally strong sports.