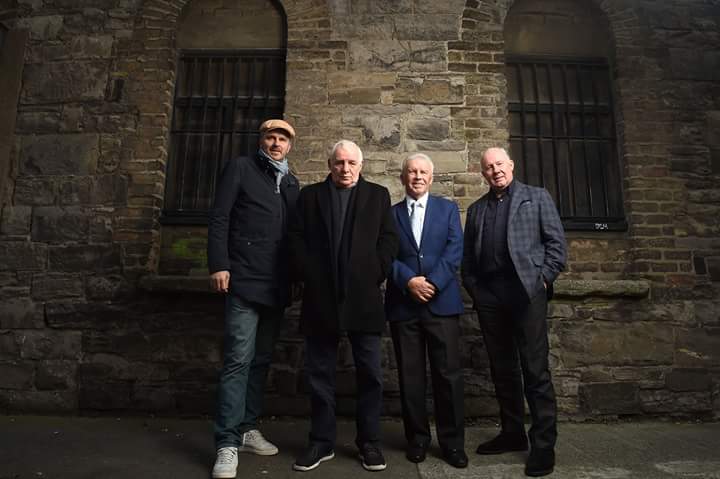 The choice of Trinity’s Edmund Burke Theatre and the decision to extend free entry offered an intimate platform, rendering the panel approachable and providing a stage to connect the old heads of Irish football to the younger generation who grew up watching them.

The friendship between the group was evident in the surprised delight on Dunphy’s face upon Hamman’s late arrival. There remains a competitive edge within the group, however, and the characteristic refusal to buy into popular narratives was unmistakeable in a particularly zealous discussion on the role of the modern day holding midfielder. With Giles and Brady in one camp and Dunphy and Hamman in the other, 10 abrasive minutes passed as both sides became more invested and forceful despite moving towards a consensus. The energy of the group showcased what Dunphy’s series will offer in lively dispute and competitive discussion.

There were, of course, some anecdotal gems from the team as Brady gave an account of his time in Italy with Juventus and what brought him there, including a remarkable story of the “Old Lady” chairman approaching him before a crucial league game and telling him to be prepared to take a penalty, which inevitably and perhaps fortunately was indisputable.

The event itself, while well-organised, would have benefited from a broader selection of questions from the crowd, as nearly all those selected were known to the moderator and appeared to have benefited from a personal friendship with him, leaving many attendants frustrated at the close of recording. This favouritism somewhat detracted from the personal atmosphere, inclusivity and the unique appeal of the event discussed earlier, and is perhaps better managed in the more mindful and receptive society run events. However, it is a credit to the College that personalities of such stature are attracted to speaking here.

Dunphy himself was in classic form, pouting and preening throughout while offering opinions that sparked incredulity from the audience and even the moderator, Finn Hetherall to an extent in a way that only Dunphy can. Biting at the steel and solidity of the current Arsenal side nearly enticed Hetherall into the panel’s debate, while later condemning Manchester United’s summer appointment of Jose Mourinho as manager and lauding Bournemouth’s Eddie Howe, suggesting him as a left-field candidate for the same role, animated the crowd even further. Dunphy and co certainly provide something different, rarely accepting the fashionable opinion.

As the audience Q&A concluded, one member of the audience asked the panel about the decline of football and like asking the Pope on Catholicism, the crew jumped at the chance to close out the first podcast on their favourite narrative of the last number of years. While their assessment reeks of pessimism, it is their honesty of opinion and belief in their analysis that makes them so watchable and separates them from the bulk of pundits in England according to Dunphy who’s previously labelled the BBC team as clowns and Thierry Henry as “a tailor’s dummy”.

Brady finished the exchange by emphasising his honest belief that he’s seen the decline materialise over the last few years and reflects their commitment to what they believe is correct, despite popular opinion. This ability to polarise the watchers and provoke reaction is the reason why they’ve retained their places as the wise old grandfathers or curmudgeons of Irish football, depending on who you ask. Dunphy closed the show by thanking the attendants and promising more to come from the legendary panel.

“The Stand” officially launches on December 5th with a show in Vicar St and will be released twice weekly on Mondays and Fridays.