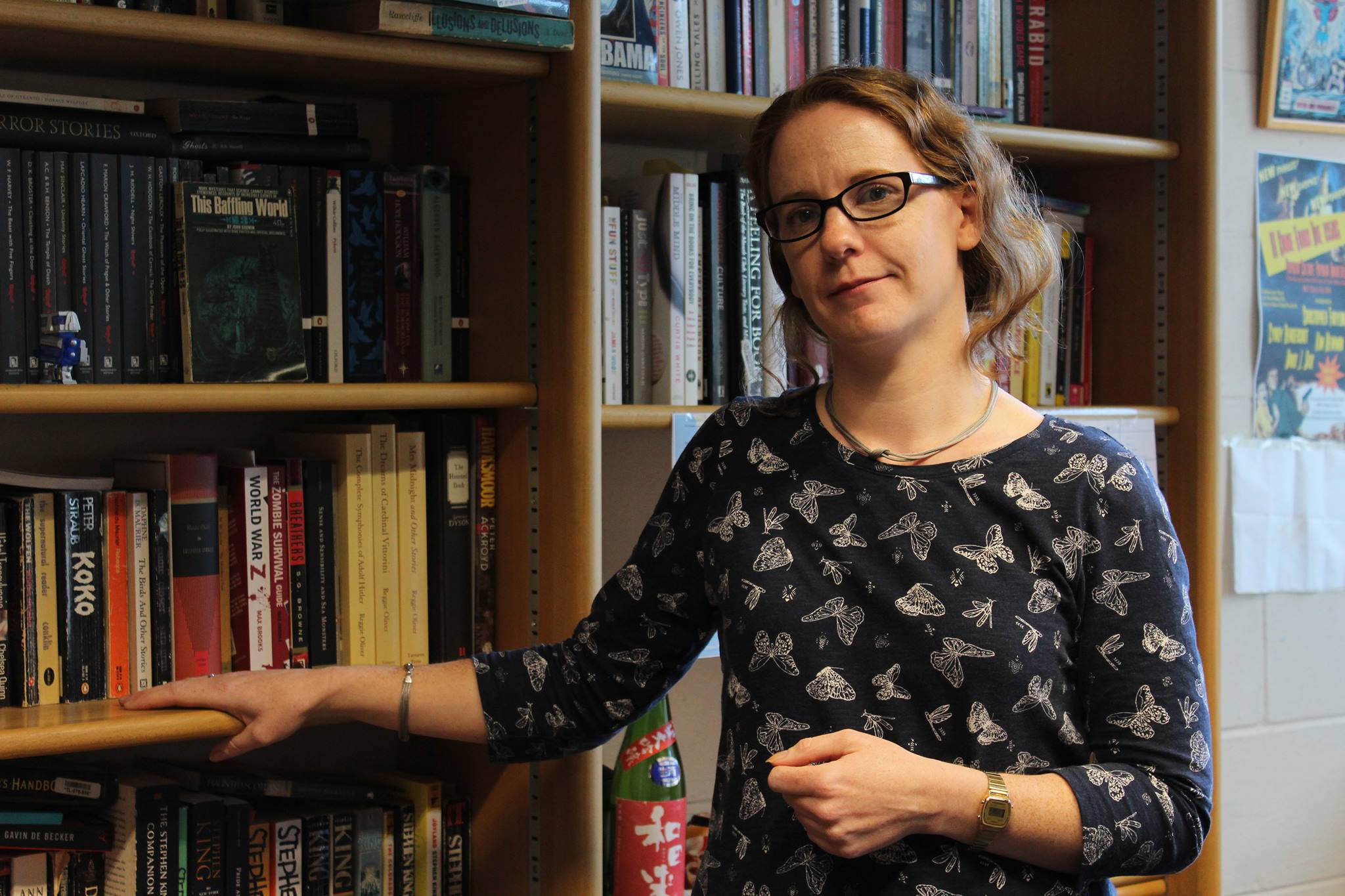 Salomé Fernandes for The University Times

Gothic romance and Gothic horror are not subjects that have traditionally had a universal appeal. At the mere mention of the phrase, one could be greeted with a look of curiosity, or equally with bewilderment. Dr Bernice Murphy, Assistant Professor and Director of Trinity’s MPhil in Popular Literature, aims to show just how ingrained it is in our society and popular culture through her research.

Speaking to The University Times, Murphy described her preferred literacy as having a ‘“big overlap” between what she reads for entertainment and what she reads for work. Naming her favourite book as the mystery thriller We’ve Always Lived in the Castle by Shirley Jackson, she subsequently wrote her thesis on Jackson’s work. Murphy’s expertise is clear, as too is her appreciation for all literature, which includes primarily biographies, true crime and gothic horror. Murphy describes what she does as being “entirely different to what creative writers do”. She found her niche by rather inadvertently exploring what hadn’t been done and asking: “Why isn’t there a book about that?” This approach is highly relatable to students, particularly postgraduate students, and one that can be applied to any and all walks of life.

Murphy described her love of the Gothic genre as stemming from having an “innate liking for that material”. She had to teach herself horror, as the true essence of the genre dates back much farther than the most well-known Gothic novels of the 19th and 20th centuries. The foundations of Gothic horror can be traced back to the days of European colonisation, to early American history, and even right up to the 20th century. Horror fiction, as we understand it today, has its roots in classic Gothic fiction that emerged at the end of the 18th century, which had a lot to do with the anxieties that arose following the French Revolution. It was fuelled by the fear instilled by the Church’s power over the lives of its followers, and the idea of the “foreigners” in the new world. From here, the clichés of Gothic horror, which we are all accustomed to, were born. Castles, young women in peril, evil male relatives and subsequently the more modern idea of the “highway horror” resembled the contemporary ideas of popular American horror, or the ‘Rural Gothic’, such as the Texas Chainsaw Massacre and Halloween.

This idea that horror represents the rawest form of emotion in literature, and subsequently film and TV, says a great deal about the lack of inhibition within the genre

Murphy described the differences between modern and original Gothic horror as the difference between the normal and the supernatural: “The one big difference between modern-day horror and original Gothic horror is that modern-day horror centers around the horror of the everyday and the horror of human fears, with a move away from the supernatural elements of original gothic horror.” This is perhaps best summarized in a line from the film Psycho: “Horror wasn’t in the house, it was in the head.” The effect of horror is therefore one that affects different levels of your subconscious. “It’s the only genre of literature named after a specific emotional and physical response”, explained Murphy. She expanded on this by saying that the entire purpose of horror was to evoke reactions of an emotional and physical nature more than any other genre. This begs the question: why would you want to make yourself feel uncomfortable or afraid? “Even if it is profoundly disturbing, it can be immeasurably important in regards to the issues that it raises”, Murphy said of the genre. This idea that horror represents the rawest form of emotion in literature, and subsequently film and TV, says a great deal about the lack of inhibition within the genre, as can be clearly seen by the manner in which it takes these raw emotions, and often rather controversial issues of the time, such as slavery and gender roles, and merges them into a single work.

When discussing gothic romance with PBS’s Charlie Rose in October 2015, actor Tom Hiddleston described it as having “a kind of brewing melancholy that stirs the soul”. Dr. Murphy observed that this was a very educated way of stating the difference between what she classed as a “contained Gothic” and an “original Gothic” – the former describing Crimson Peak and other modern work, the latter in reference to works such as Dracula or Frankenstein. Both of these are Gothic horrors of almost mythical proportions, but what is perhaps most surprising about this topic is to see the likes of Jane Eyre mentioned alongside these titans of horror and literature alike. Murphy explained that Jane Eyre is a Gothic text at heart, with aspects of multiple other genres within it. This could perhaps classify it as a “contained” or “popularized” Gothic text, which is tailored in the more extreme elements and mixed with elements of other genres in order to make it more universally accessible. This ”hybrid Gothic” is the precursor to more modern works of the same nature, most notably the Twilight series of books and films.

Murphy explained that all popular fiction has aspects of the Gothic, adding that, to the everyday person, the more obscure literature of this genre is generally lost without a university study of the subject. She also described Stephen King whom, although she idolizes him, tends to dominate the “horror” section of your local bookstore. Dr. Murphy said that recently, “horror has been sidelined by young adult fiction and urban fantasy,” wherein she said that “people tend to read a lot on vampires and werewolves but they might not actually be horror novels.”

It is the most cathartic and dramatic way of expressing the dark side of the human psyche which, in today’s world, sees the lines between life and death are becoming ever more blurred

Giving a profound synopsis of the Gothic genre, Murphy described it as the most cathartic and dramatic way of expressing the dark side of the human psyche which, in today’s world, sees the lines between life and death are becoming ever more blurred. The idea, therefore, of the zombie sub-genre is fascinating, as it does not position death as the big question, but rather asks: what quality of life are you leading? This makes the Gothic genre more relevant now than it ever was, despite it apparently being at its most popular in the 1970s and 1980s.

Murphy suggested that the best way to truly appreciate literature, or indeed to write your own, is to “read intelligently” because “you can’t read it all”. She also urged caution, however, noting that “you don’t want to become too niche” lest you lose perspective on the subject in its wider context. Overall, the relevance of the Gothic genre is more apparent than ever and its origins run deeper into world history and the true understanding of the human psyche than any other genre. Of course, to fully understand and appreciate it, you must read it. Murphy’s research provides an invaluable insight into an utterly captivating genre of literature. Dr.Murphy concluded by Advocating for her M-Phil in Popular Literature, which is recruiting once again, and her parting word was to remind us that “a book is like a loaded gun,” so make sure yours is always fired in the pursuit of knowledge.