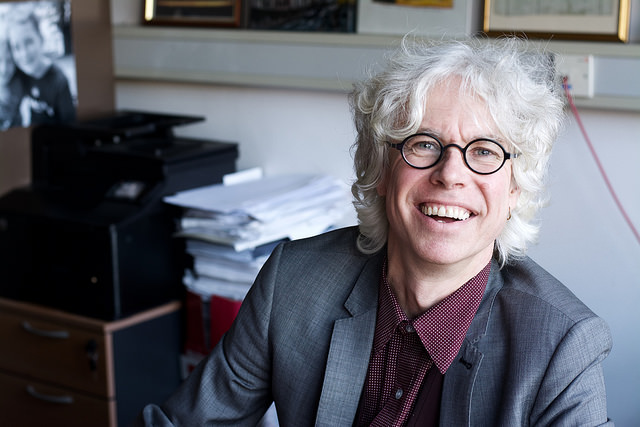 Foams are something we encounter everyday. From washing your hands to shaving, it is an area with which everyone is casually accustomed. But Prof Stefan Hutzler, Associate Professor of physics in Trinity, has dedicated his life to the research of these foams and other complex structures. One might immediately think that he spends his life surrounded by bubbles, but his research stretches all the way from stock markets to the aesthetic value of repetitive patterns in crystallized structures. “What I like in the field of the foams is that it’s a tangible subject”, explains Hutzler, speaking to The University Times.

Hutzler secured his undergraduate degree from Regensburg University in Germany. He describes his love of science as being “straightforward and boring”, as it was just something he was always interested in. It was the arrival of a Trinity student to his home university that sparked an interest in moving to Ireland: “I thought it was a good idea to come to Ireland because I had been there before on holidays, and the topic was foams, and I thought ‘oh, hold on, that sounds weird’.” Hutzler admits that he liked the idea of the “random mess” that foams consisted of. “I remember writing at the time to the person who advertised this here position: ‘I come from Bavaria. We have a lot of nice kind of foam in our beer, so I’m the right kind of candidate’”, says Hutzler, smiling.

I come from Bavaria. We have a lot of nice kind of foam in our beer, so I’m the right kind of candidate

Hutzler’s research was initially overseen by Prof Emeritus Denis Weaire, one of Ireland’s top physicists. “I mean, normally you don’t do your PhD research in an area where you go to the professor, and say I would like to do some research in this”, explains Hutzler. “So if I work for, Weaire it was clear to me that it was going to be on foams, and that is how I ended up here.” Hutzler made his way up the ranks, eventually securing a permanent lectureship position. “I always wanted to be a professor. It was just appealing to me”, he explains.

Despite the appeal of this role, Hutzler wasn’t entirely clear on what the position required: “At that time, when I thought I want to do this, I didn’t have a clue what you did when you were a professor. I just thought that you might do science, which I liked. I wouldn’t have known that you spend lots of time doing some admin work, which can be rather boring, or applying for some funds.”

Despite the less-interesting side of professorship, Hutzler has stuck with it. His research, entitled Foams and Other Complex Structures, is captivating. Due to the aesthetic value of working with foams, Hutzler has had close ties with Trinity’s Science Gallery. He has helped curate two exhibitions in recent years. The first, Bubble, was in 2009, and saw crowds of 70,000 people over a three-month period. A YouTube video created by the Science Gallery from the exhibition shows a myriad of colours, bubbles and excited children interacting with the science behind the magic. “It’s an exhibition where you can get your hands not dirty, but clean”, he explains.

The second exhibition, “Oscillator: Everything in Motion”, was featured in the gallery three years ago, focusing on rotations and vibrations. Once again, it was the interactiveness of the science that was remarkable. It was also at this exhibition that Hutzler’s alternative method of teaching came to light. During one presentation, he picked up his guitar and performed a song called “Oscillations”, set to the tune of “Good Vibrations” by The Beach Boys. Asked whether he believes people remember things better due to his alternative method of delivering his presentation, Hutzler admits that he doesn’t know: “I just like doing it. I get more fun out of it. That’s the key part. It’s something else I suppose. They didn’t know what to expect.”

When further pressed about the interaction between art and science, Hutzler says he doesn’t know if it’s important, but that he does “think it’s fun”. He then turns and points to the shelf above his desk upon which rests several pieces of art. “Some are art, and some are science”, he explains, but the overall theme of them is “similar”. He proceeds to point out which are scientific images and which ones are art, a distinction that is hard to make unless you recognise the scientific structures. This interest in the blurred line between art and science feeds into one of his most recent pieces of work.

Part of Hutzler’s research is to look at different types of soap bubbles and the patterns they form. Hutzler and his team were approached by Kym Cox, a British photographer who had come across his work online. She sent him photographs of single soap films, and he offered to show her how to create different foam structures. “We take glass tubes, maybe 50 cm long, a centimetres in diameter. We fill in bubbles, and they they crystallize and we get a structure”, explains Hutzler. The resulting photographs show patterned, crystallized structures.

It is easy to see why Hutzler was attracted to the aesthetics of this area of research. “She wouldn’t have known how to make these structures”, he explains. “In fact, there’s not many people making these structures, and my group here, we have really the top structures.” Despite the complex science involved in discovering how to create these structures, the actual bubbles are simply made using Fairy Liquid and water.

This collaboration was a learning curve for Hutzler. “She described a structure to me, and I didn’t understand what she meant until she showed me the photograph”, he says. Cox had taken away the cylinder that was confining the bubbles and simply allowed them to dangle out, creating a new structure. “These were structures that we never, ever thought about, and now we’ve started simulating some of these on the computer. So there, the artist brought something into the science area”, he enthuses. “So that was a nice example of something new coming out of the collaboration because we never would never have done that before.” This collaboration pushed Hutzler to consider another side of his research and opened new pathways for his work: “If you do something all the time you just tend to think of your routine, so I never would have thought to get rid of the tube.”

The resulting work was shown in the Magic Gallery in London this past summer. “That was a great success. It ran for two weeks in London. So in that respect, I think the interaction with art and science could certainly bring something new, some new aspect”, says Hutzler.

We don’t get money for making nice pictures

Hutzler recently received a grant from Science Foundation Ireland (SFI) to look at the potential of using foam to create new products. They’re currently looking at how foam can be used to create paper-like products by replacing the water used. “Instead of using water, we suspend these fibres in a foam structure, and then we can put this foam structure that contains the fibre on a plain, and then suck out the liquid, and then you have paper that’s been made by a foam. So you don’t see the foam afterwards anymore, but you can make sheets of paper out of fibres that you couldn’t use for the normal process,” he explains. Hutzler also wryly notes that “we don’t get money for making nice pictures”.

Hutzler wants to further explore the potential of these sheets. Apart from this, he is also looking at the structure of foams: “We have computer simulators, we do calculations on paper by hand, and we have a lab where we do experiments and in the ideal case the one sort of simulates the other thing.”

Hutzler has also used his knowledge of foams and physics to look at stock markets and the distribution of wealth in society. This involves applying what he knows from statistical physics to the real world: “You cannot predict what individual atoms are doing, but you can describe what a large collection of them is doing. That is what we do in statistical physics.” This knowledge has allowed Hutzler to compare a large population of atoms to a large population of people. He explains this is also stimulated by “what every bubble does” as he understands “the average properties” from his foam experiments. The crashes experienced in stock markets are similar to what happens when a lot of bubbles rearrange. “From a physics point of view, from a physicists perspective, the fact that you have crashes is not is to be expected. They’re not really crashes. They’re part of a big distribution. These things happen. So there is lots of things that physicists can tell about stock markets.”