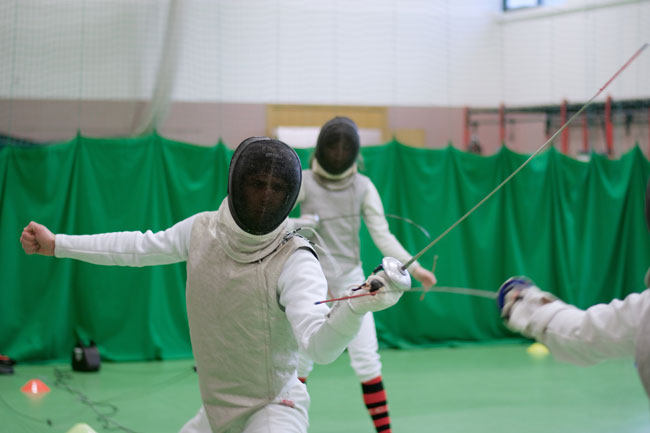 Dublin University Fencing Club (DUFC) – not to be confused with Dublin University Football Club, which is, of course, the College’s Rugby Club – is older and more venerable than many of the buildings on campus. Students of Trinity have been duelling one another since 1774 (officially at least), the year before the fencing club was officially founded.

However, fencing as we know it today did not become its own sport until the late 19th century. After the art of duelling evolved into the sport of fencing, it was chosen as one of the original disciplines at the inaugural Olympic Games in 1896 and has been an indispensable part of them ever since.

Trinity soon followed suit with the rest of the world, and what used to be known as the Trinity College Duelling Club became the Dublin University Fencing Club in the 1940s. The club has enjoyed many years of success since then, and it is one of the most renowned fencing clubs in the country.

Fencing is a sport represented in most colleges in Ireland, and DUFC has won 39 of the 50 intervarsity competitions held over the years, as well as holding the record for the most consecutive intervarsity titles at 13

Fencing is a sport represented in most colleges in Ireland, and DUFC has won 39 of the 60 intervarsity competitions held over the years, as well as holding the record for the most consecutive intervarsity titles at 13 – an astonishing monopoly. It is currently on a streak of nine consecutive titles and is working towards a 10th in March of this year. As well as having several successful club campaigns to its name, DUFC has also played a part in the development of many formidable fencers. One of its former members is Natalya Coyle, who represented Ireland at the summer Olympics in London 2012 and in the modern pentathlon at Rio 2016. Max Milner, who graduated Trinity in 2016 and was the men’s captain of DUFC, is now part of the fencing squad of Great Britain. Moreover, two of this year’s four recipients of the “University Pinks” are members of DUFC. These competitive successes and the athletes that have gone through the club’s ranks are prime examples of the pedigree that DUFC has garnered over the years.

While playing the game at the highest levels, the club is still always looking to attract beginners. Speaking to The University Times, captain and men’s captain, James Bryant, stated that “it is often perceived that the fencing club isn’t very accessible, but this is not the case at all. We are always looking for new athletes to welcome into the club”. The club has two beginners training sessions every week, on Mondays and Fridays, and they are open for everyone. One concern for prospective members would be the cost of equipment, but the club provides all the necessary gear. Though every beginner will initially be taught how to fence foil, all three disciplines of fencing are coached at the club. Each athlete gets the opportunity to try their hand at foil, sabre or épée, and everyone is given the opportunity to realise their potential in whichever discipline suits them the most. There is also a development squad that trains once a week, so there are many opportunities for beginners who show promise and are willing to commit and become more involved in the club.

Coach Colm Flynn, himself a former Trinity student, said that “all are welcome to the club, it’s always great when people find a sport they are passionate about and one of my main aims with the club is to facilitate that” when speaking to The University Times. He greatly encourages less experienced members and puts a lot of time and effort into the development of athletes. Added to the developmental training sessions, there are intermediate sessions that combine the training of core squad members and of athletes wanting to gain more experience. These sessions are an opportunity for athletes to learn from those who are more experienced than themselves as well as an opportunity for the more experienced members of the club to pass on their knowledge and skills to up-and-coming athletes.

Flynn is the only full-time member of coaching staff at DUFC, yet there are quite a lot of athletes that need to be trained. As a result, Flynn often gets help from more experienced club members when it comes to coaching the beginners. Lucy Johnson, captain of the women’s squad, told The University Times that “we are very blessed to have so many good fencers on the team, especially as they pull less experienced fencers with them and encourage them to improve”.

The prestige of the club is reason enough for loyalty and commitment, but the sense of friendship and rapport between the club members is added incentive for everyone to work hard

Added to all these training sessions are core squad training sessions. These are on twice a week and it is at these sessions that most of the preparation for intervarsity competitions takes place. Because DUFC has enjoyed so many successful campaigns, every squad member is determined and driven to give their all to the club. A recurring theme when talking to several members of the club was the fact that they all feel a great loyalty to each other. Speaking to The University Times, Flynn repeatedly states that he is incredibly happy with the commitment of each squad member. Within the squad, partnerships often develop. These partnerships consist of going to the gym or going for runs together to improve fitness. At the core of these partnerships is a shared desire to improve yourself and further your ability in order to ensure the continued success of the club.

There are competitions and events nearly every weekend, so there is quite a high level of fitness required for those involved. Fortunately, the training sessions every week and the individual commitment of squad members ensure that the standard is maintained. Furthermore, although fencing is a solo sport, there is a real camaraderie within DUFC. The prestige of the club is reason enough for loyalty and commitment, but the sense of friendship and rapport between the club members is added incentive for everyone to work hard. Flynn tells The University Times that “there is an atmosphere of fun in the club, but it is fun through high achievements and commitment”. It is this ethos of everybody working together and encouraging each other for a collective goal that is at the root the Dublin University Fencing Club’s enduring success.