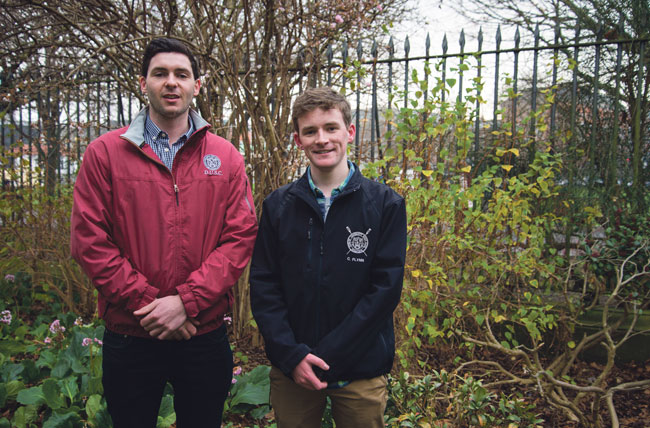 Scott Flanagan (left) and Cian Flynn have been announced as winners of the prestigious Pinks awards.
Sinéad Baker for The University Times

Last month, Trinity Sport announced the winners of the prestigious Pinks awards, the highest accolade Trinity can bestow on athletes. The four winners, covering three different sports, are awarded by DUCAC based on outstanding individual merit. The University Times sat down with each athlete to gain an insight into their sporting prowess and what motivates them to continue striving for success. From the conversations, the high regard each winner has for their individual club and the role the clubs played in their sporting development, is obvious.

Phillip Cripwell, a third-year mechanical engineering student, has been fencing for just over 10 years. The sport was offered in his secondary school and he immediately fell in love with it. He soon took the next step and joined a fencing club and has been fencing multiple times per week ever since. After joining Dublin University Fencing Club (DUFC), his years of experience ensured that he quickly rose up through the ranks and within no time he was soon competing for the club at intervarsity competitions.

For Cripwell, the appeal of fencing is the fact that it combines mental strategy with agility and athletic ability. Foreseeing the movements of an opponent, reacting accordingly and feigning an offensive move are all part of the mind games required to break down a stubborn defence. When asked about his future in fencing, he told The University Times that “the sport is something I take very seriously and I would like to keep it up for as long as I can”.

When Cripwell realised that his own performances had put him within striking distance of a Pink, he immediately set the award as a goal for himself. The award is a great honour, he says, and he is encouraged by the fact that College has recognised his effort and commitment to the sport. However, Cripwell isn’t happy to let the Pink represent his peak and as he explains, if anything, the award has only whetted his appetite for more and more success with his club.

Lucy Johnson’s journey to a Pink began more recently. Although she only took up fencing in her first year of college, Johnson has already achieved things in the sport she never thought possible. While intending to join the ballet society during Fresher’s week, an enthusiastic representative of the fencing club convinced her to join DUFC instead. Ballet’s loss was fencing’s gain. To her surprise, Johnson showed promise during her first training sessions and was picked to join the varsity squad at a novice competition.

It was Johnson’s grandfather who first believed she could win a Pink. With the support of the club, she proved him right: “The club is your foundation, you owe everything to the club”, she told The University Times. Her ties to the club run deep and when she recently travelled to the Fencing World Cup it was DUFC’s head coach, Colm Flynn, that accompanied her as her “Team Ireland”.

Johnson studies acting at the Lir Academy and is rarely on campus, so she used to feel slightly removed from college life. The award has made her more aware and appreciative of the fact that the college recognises her hard work and that she really is “as much a part of Trinity College as all other students”.

Cian Flynn, of Dublin University Boat Club (DUBC), has a passion for Trinity and this shines through as he explains the work that goes into captaining one of Trinity’s largest clubs. As we speak, the bonds his family have with both the club and the sport become clear, with cousins involved in the sport and Flynn’s father having rowed for Trinity in the 1980s. Flynn began the sport young, coxing by the age of nine and rowing by 14 with Neptune Rowing Club in Dublin. He has been involved in DUBC throughout his time at Trinity and last year, after enjoying the position of Regatta Secretary, he chose to run for Captain in the final year of his computer engineering degree.

While he was thrilled to receive the Pinks award, Flynn quickly pointed to the teamwork of his crew and the role this played in his achievement. “I’m obviously delighted to get the award. A lot of good people have come through the club who haven’t been awarded, so it really is an honour.” In 2015, Flynn was part of the men’s Senior Eights Championship and Intermediate Championship winning crews. Seven of that crew were awarded last year, with Flynn picking up honours this time around. Considering how rarely the team win the competition (they had only won it once between 1981 and 2015), it is unsurprising that Flynn ranks the victory in the Senior Eights Championship as his greatest achievement.

What sets rowing apart from other sports, and what drives him to achieve success for the club, is that “no other team sport is as team dependent, and comes close to being so co-dependent”

Flynn admits that combining work and college commitments, with 10 to 15 hours running the club, every week, is often difficult but remains worthwhile. He believes the strength of this year’s novice squad is probably due to the “boost given by the Olympics, with people now actually knowing what the sport is now for the first time in Ireland”.

With the club having just one full-time paid coach, much of the support for coaching comes from past members, as the community aspect of the club remains crucial to its continued success. Competing against universities that have opened their clubs to outside members, Flynn believes that the strength of DUBC comes from the tight-knit student atmosphere. “The camaraderie that you get as part of a student club cannot be replicated” he says. For Flynn, what sets rowing apart from other sports, and what drives him to achieve success for the club, is that “no other team sport is as team dependent, and comes close to being so co-dependent”.

When The University Times sat down with Scott Flanigan, he emphasised the fact that his achievements are part of a broader background of progress made by the sailing club. As he explains, Flanigan believes he must have sailed with about thirty different people during his time competing for Trinity, emphasising the team ethos that is so imperative to their continued success. Flanigan has been sailing since roughly the age of eight, competing in national competitions throughout his youth. He continues to be involved in the outside development of the sport and is one of the national coaches for the mirror class, a class of smaller boats. However, Trinity Sailing holds a special place in his sporting development.

The idea that their achievements would not have come about without the hard work of Trinity’s sports clubs was a constant theme among the four winners, and is evidence of the continued commitment to success in Trinity sport

Flanigan competed at the 2012 Olympics in the 470 Class after qualifying the year of his Leaving Certificate. Upon starting college, he quickly ingrained himself into the Trinity Sailing scene. A former sports scholar, Flanigan served as second-year International Relations and Alumni officer at Dublin University Sailing Club before becoming club captain in 2014-15. As he explains, through the hard work of many in the committee, Trinity Sailing has enjoyed a period of revival. Competing at a higher level and getting more sailing opportunities was something Flanigan prioritised when captain, as well as working to grow the club “from the roots upwards”. This included trying to develop as broad a base of sailors as possible and improve “everyone’s level and not just the top level”. Working closely with friend Richard Roberts, who followed Flanigan as captain last year, along with Emma Flood, Flanigan believes the organisational structures of the club have improved hugely.

He explained how the club’s committee and members had worked tirelessly “making sure the structures were in place to improve the quality of the club”. This has resulted in the renewed growth and development of the club, with the “performances improving massively in recent years” and the club winning two Club Colours in the past three years. This comes from the club working to build long-term success, rather than just building for a one-year campaign. It has earned three second places in the past four years at the IUSA Student Yachting National Championships, with Flanigan believing the club has the ability and the potential to go one place higher this year. Flanigan is massively proud of the hard work and progress taken by the sailing club in recent years and in his view it has now established itself as one of the “premier sports clubs in Trinity”.

Each of Trinity’s Pinks winners emphasised the role their respective clubs played in their sporting development. The idea that their achievements would not have come about without the hard work of Trinity’s sports clubs was a constant theme among the four winners, and is evidence of the continued commitment to success in Trinity sport. So long as these clubs continue to produce athletes so committed to their college, they’ll be in safe hands.