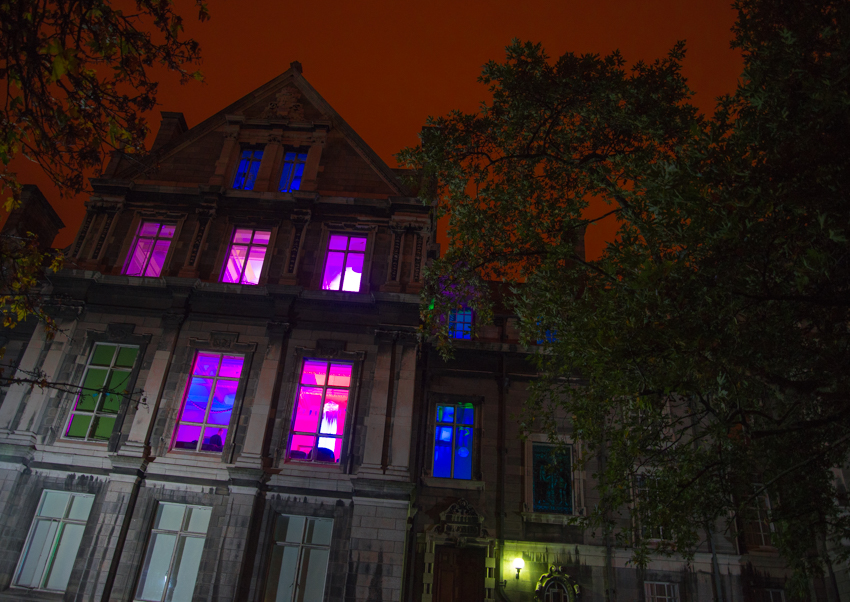 The Trinity Arts Festival (TAF) is a week that contains something for everyone, with shamanic workshops, glitch photoshop tutorials, flower crown making classes and free acoustic gigs amongst many other artsy events. This artistry last night culminated in the highly anticipated TAF wrap party.

Like the rest of TAF’s events this week, the wrap party was a free event, while the return bus to and from the secret mansion was €10. The night was advertised as “bring your own beer” (BYOB), offering attendees an affordable and whimsical way to end their week, which is always welcomed among students.

Upon arrival at the Rosendale Mansion in Shankill, guests were met by an old Georgian mansion which was surrounded by eerie towering trees. Their shadows crept up and around the building which was illuminated by neon lights. With the antics of the night remaining undisclosed and a full moon in sight, my first impression was one of absolute intrigue: what was inside this enchanting mansion? And what did TAF have in store for us?

The night began with an array of acts who played in one of the many impressive rooms of the Georgian mansion. It seemed as though around every corner there was a hidden den filled with an old library, a piano or exquisite furniture just waiting for a drunken loved up couple to occupy. Just like TAF’s events, there was something for everyone, areas to relax and catch up with friends, a basement with an impressive sound system and a full lineup of DJs, a conservatory beautifully lit and an outdoor garden area straight out of Body and Soul festival.

The first act was the always entertaining Dachau Gift Shop who performed their rendition of “White Light” by the Velvet Underground and “Nessun Dorma”, these were just some of the crowd favorites. Dachau Gift Shop’s experimental sound, performance art type set and effortlessly cool persona had the audience captivated.

Next, Cat Daly and Amelia McConville enchanted the audience with songs by Lou Reed like “Perfect Day” and Velvet Underground’s “Ride into the Sun”. They ended their performance with “Satellite of Love” keeping to the Andy Warhol theme. Afterwards, the TAF committee thanked everyone who had been involved during the week that had contributed to making the festival a success. The atmosphere was overwhelmingly vibrant and friendly, with everyone present was excited to see what was in store next.

The second half of the night began in the basement of the mansion where several DJ’s took to the stage to supply the audience with floor fillers. Guests danced and danced and then danced some more with an occasional cigarette break to cool down and befriend that familiar face that you had seen wearing a TAF t-shirt around campus during the week. At one stage I recall hearing a gang of party-goers singing their own rendition of “The Auld Triangle”, which was delightful!

As the night had come to an end, droves of students made their way out of the magical mansion to catch the bus home. But the party didn’t stop there, as the journey provided another excuse for an almighty sing-along. With the aid of a charged iPhone and a portable speakers the sounds of ABBA could be heard all the way from Shankill to the Nassau Street entrance of Trinity.

Between the hauntingly beautiful location, the Velvet Underground themed acts and the effervescent atmosphere the wrap party possessed something truly magical. TAF has once again reiterated why they are one of the best societies in Trinity, and have also provided students with ample reason to get involved in the future.