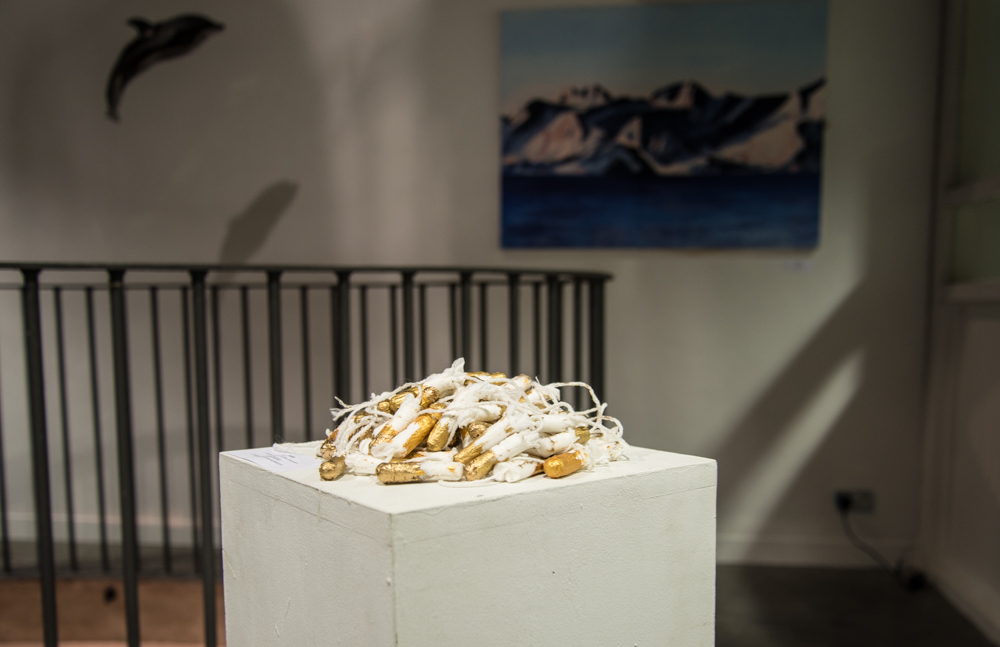 “Period Profit” by Ellen O’Sullivan raised questions and a discussion on the tampon tax and high cost of feminine products.
Arianna Schardt for The University Times

This evening, TCD Visual Arts Society (VisArts) launched their annual end-of-year exhibition at Temple Bar Gallery + Studios, following on the success of previous years. Spanning four floors and over 40 works of art from both staff and students, the event offered a variety in the works on display. The event was well attended, seeing staff and students alike enjoying the vibrant atmosphere and complimentary wine.

One of the most exciting elements of the event was the range of artists included, with representations from both staff and students ranging from the Department of History of Art and Architecture to the Department of Computer Science and Statistics. Similarly, the mediums and range of works was impressive, seeing striking pictures, inventive sculpture and intricate paintings. Impressively, an interactive piece was included, which constantly drew in crowds throughout the evening.

One piece, entitled “Transcience” by Anna Belitskaya, which was displayed on a tall pedestal, juxtaposed two potted plants – one, pink and white flowers in a pot, and the other, purple flowers pulled from the earth carefully displayed in an open hand. “Which side has greater meaning: to live forever or to live?”, was thoughtfully written on the display, drawing audiences in in order to think deeper about the work on display. As I walked passed, I heard audiences murmuring and discussing the work in front of them, fulfilling the aim of the artist.

“Period Profit” by Ellen O’Sullivan displayed a tower of tampons dipped in gold paint, raising questions and a discussion on the tampon tax and high cost of feminine products. Again, crowds circumambulated the work and discussed the work’s meaning. As well as being visually engaging, the work drew important questions.

Third-year theoretical physics student Vladyslav Sirenko’s unique piece “Freaky Ukulele” was a ukulele painted with a distinctive and vibrant pattern. Taking the traditional medium away and moving to using an instrument as a canvas, the artist created an engaging visual dynamic. 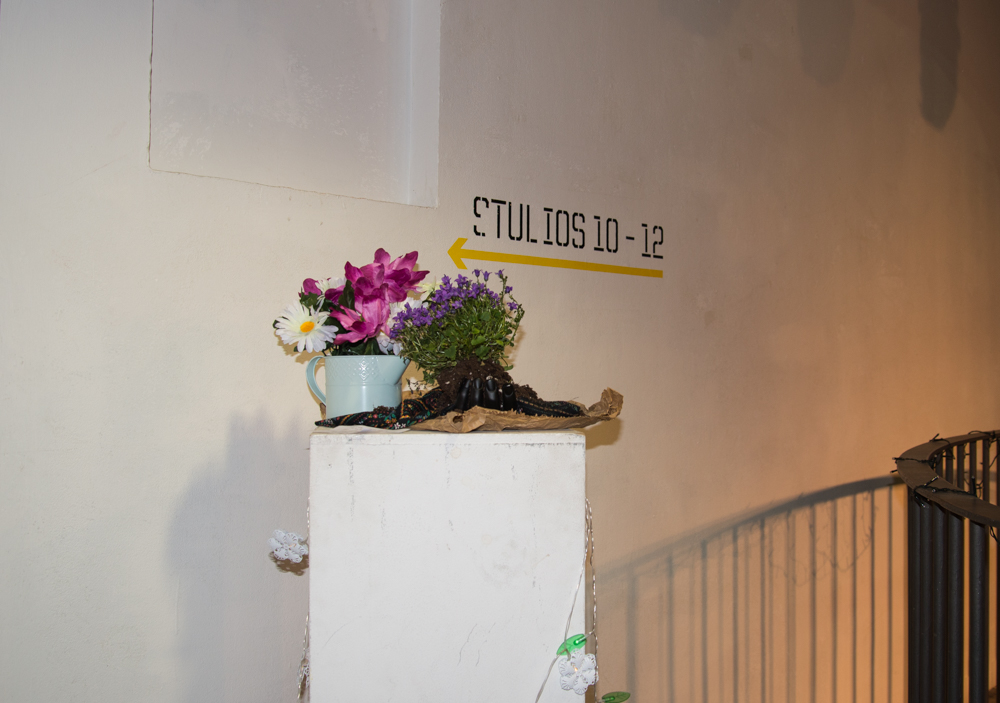 Anna Belitskaya’s “Transcience” drew audiences in, causing them to think deeper about the work on display.
Arianna Schardt for The University Times

Several impressive portraits were part of the display. Final-year classics student Vincent Coldrick’s “Dr Gueret and Florence” took a startling approach to the genre. With two figures, a man and a woman, staring directly at the viewer with wide, glaring eyes, the viewer is both invited to take a closer look and taken aback by the intensity of the stare. “Jenny” by Hannah Baker took a more ethereal and calm approach. Even the soft brushstrokes match this sense of calm. The subject carefully looks to the side and offers reassurance to the viewer, dramatically contrasting with Coldrick’s portrait.

The venue Temple Bar Gallery + Studios, with its minimalist aesthetic and white walls, provided the perfect location for the occasion. The sterile railings were decorated with fairy lights, brightening the space, and the variety of plants provided welcoming contrast with the concrete floors. While the colors, medium and genre of the works on display varied, the venue was well-suited to house this diversity.

Even though it was sometimes difficult to see the works on display as a result of the massive crowds, this is only a testament to the hard work put into the exhibition by the VisArts committee and artists alike. Once again, VisArts has created an engaging and unique exhibition, with works in a range of mediums from a large variety of staff and students, which is not to be missed.

The exhibition will run until March 9th at Temple Bar Gallery + Studios. Admission is free.