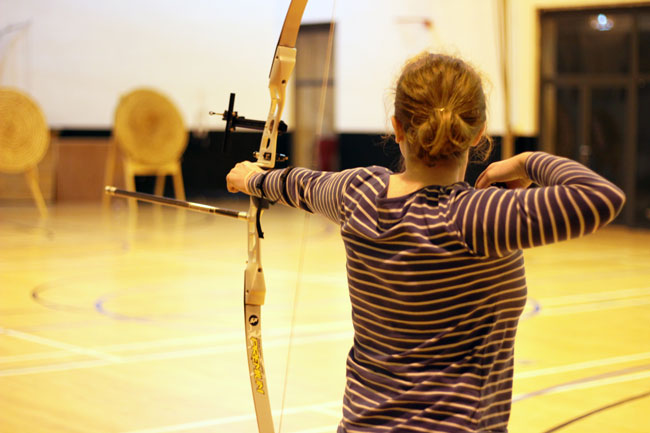 Dublin University Archery Club had been living in the shadows of Trinty’s sporting world for the past few years. Until recently, it was not affiliated with Dublin University Central Athletic Club (DUCAC), the governing body for Trinity’s sports clubs, making it difficult for it to gain new members and momentum as a team. This academic year, however, it finally became officially affiliated, and has been able to set its sights on making it as one of Trinity’s newest sports clubs. Club treasurer, Clare Parkhouse; Club Captain, Eve Kearney; and Club Secretary, Nicole Maiorano, spoke to The University Times about the world of archery in Trinity.

Dáire Healy, their head coach, is the engine of the club. Currently studying for a PhD in neuroscience in Trinity, Healy is balancing this with his considerable commitments to the club. He has been looking to start up an official archery club in Trinity since he began studying here, so it is fair to say that the club is a project of passion. In what was the start of the journey towards the official founding of Dublin University Archery Club, Healy began gathering Trinity students who are passionate about archery to start training. For the past five years, the club was just a few students shooting together. But even without official representation in the College, it was able to gradually garner enough interest and, this summer, finally became a fully recognised DUCAC-affiliated club.

Due to lack of affiliation, the club was not able to train on campus or in Trinity’s sporting facilities. Because of this, it had been training in Belvedere College, sharing the space with the archery club from Dublin Institute of Technology (DIT). Whether or not Trinity’s club will be able to train at some of Trinity’s facilities in the future is uncertain and is currently being negotiated with DUCAC. The club is currently on a trial period with DUCAC, and DUCAC funding will only start next year. Currently the club is self-funded, which has been “interesting”, according to Parkhouse.

Members train twice a week in Belvedere, and this is the first year that the club has been able to build a core squad, with approximately 30 committed members training every week

This year, the club had a stall during Freshers’ Week for the first time. It got approximately 180 signups, already reaping some of the benefits of being an officially recognised club. This influx of new athletes has relieved some of the stress of being a self-funded club. The club runs six-week beginner’s courses throughout the year, and it has completed six of these courses this year. There are about 20 places in each course, and it costs €5 for every session you attend. That €5 covers the cost of hall rental and equipment rental. While this is already quite good value, once DUCAC funding comes in, it will possibly become even cheaper.

Those who have completed the beginner’s courses and know the basic ins and outs of archery, especially the health and safety measures, are welcome to come to members training. Members train twice a week in Belvedere, and this is the first year that the club has been able to build a core squad, with approximately 30 committed members training every week. The club currently have Healy as their only coach, and are looking to get some of the more experienced members to do some coaching courses soon, in order to expand the number of coaches in the club.

This year also marks the first occasion that the club has been able to officially represent Trinity at competitions. There are five competitions for archers in a year, and in 2016/17 the club has been able to put together a consistent squad for the first time. In previous years, it was only able to shoot as guests at competitions. The club even managed to bag a gold medal at a recent competition, with Siobhán Flynn, the club’s Entertainments Officer, securing the gold medal in advanced barebow shooting. Speaking to The University Times, she says she was “shocked” at the fact that she won. On Saturday, March 11th, the club competed at the intervarsities in Tallaght, winning three medals and continuing the run of success started by Flynn. These successes show that Dublin University Archery Club is already cementing its position in the college archery community.

It’s a very relaxing sport, you can challenge yourself without competing against somebody else

Although archery is a solo sport, there is a great team spirit and sense of community within the club. In fact, the comradery that archers share reaches beyond the confines of the club and encompasses the whole archery community in Ireland. “At competitions, even archers from other colleges will come over and give you tips on how to improve your shooting”, says Maiorano. There is a strong culture of encouragement within the whole club, and everybody is always looking to help each other to improve. Within the wider archery community, the core goal is not individual success, but rather the collective success of archery as a sport. People who are passionate about archery are looking to extend its reaches in colleges and higher education institutions, and that’s exactly what the club is about: a group of people passionate about a sport, looking to succeed in it individually, while also looking to grow the archery community as a whole.

When asked what it is that makes archery such a special sport, Parkhouse focuses on the meditative aspects of the sport. She tells The University Times that “it’s a very relaxing sport, you can challenge yourself without competing against somebody else”. You are standing beside your teammates when training, spurring each other on, yet the main record you are looking to beat is your own. “Archery has a real mental aspect to it. If you’re not in the right headspace while shooting, you won’t do well”, Maiorano explains. “Added to the comradery, the mental aspect and the relaxing aspect of the sport is the fact that it looks really cool”, Kearney adds.

Dublin University Archery Club is greatly encouraged by its first year as an official DUCAC-affiliated club. It is now able to officially represent Trinity at competitions, the club has vastly increased in size and all members are overwhelmed by the interest that students are showing in the club. Furthermore, it has already brought a gold medal to Trinity in their first year and is looking towards further successes in the future. In order to garner more interest, and to show students how much fun archery can be, the club is planning an archery tag event. This would look like a game of airsoft with an Airsoft Pistol, but with bows and arrows instead of guns. Details about this event are yet to be confirmed, but its committee is excited to hopefully have many events like this in the future. It has been a great first year for the youngest sport club in Trinity, as they target many more years of shooting to come.

Archery has a colourful history that is proudly being continued in modern times in the form of tournaments and clubs. Throughout the world, Archery tournaments similar to the ones the DUAC take part in are actively being held, and in some countries, the use of bow and arrow is still used as a preferred method for hunting. With its popularity around the world, those who are looking to take part or even have a passing interest in archery or bowhunting may find the product article: The 9 Best Bow Sights Reviewed & Revealed ( Hands-on 2019 Guide ) – Outdoor Empire – an interesting read.