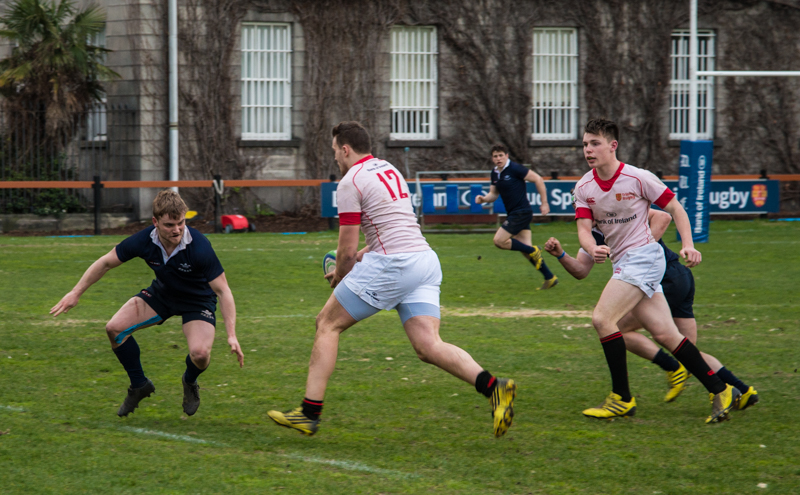 On what was the warmest day of the year so far, almost 300 students gathered on the lawns by the Pav to take in the sunshine. They were treated to an excellent rugby match between two famous universities in Trinity and Oxford. With many players earning selection for both the Ireland Under 20 side and the Irish Clubs International team, this was not a first-choice Trinity XV. Having said that, this is an old fixture in the calendar and it provided an enthralling match. DUFC were littered with freshmen who were very impressive on the day.

Oxford, sporting their famous navy blue strip with the classic white collar, got off to a great start. After only five minutes of play, the visitors were over the line after a strong lineout maul. The conversion was knocked over by powerful inside centre Basil Strang. Trinity reacted quickly with a thrilling attack which resulted in a penalty. Winger Bryan Mollen, who has been kicking beautifully of late, took the three points with ease. Oxford got themselves back into a seven point lead soon after this when Strang banged over a penalty from over 40 metres.

From the resulting kick-off onwards, Trinity began to establish set-piece dominance. After the visitors’ loose-head prop was sent to the sin-bin for an infringement in the scrum, DUFC kicked to the corner. They got a maul try of their own when second-row Jack Burke squeezed over the line in the right-hand corner. The kick did not phase Mollen and the scores were tied at 10-10 after 30 minutes. Strang converted another penalty a couple of minutes later before a huge surge led to an individual try for Oxford’s impressive number eight. A subsequent Trinity attack came to nothing and the score was left at 20-10 to the touring side at half-time.

DUFC started the second half in a very attacking mode. Full-back Michael Sylvester counter-attacked with pace and guile. This set up the field position for a Trinity scrum in the opposition 22. The home side demonstrated their dominance in this facet of play once more, earning two further penalties. They continued to search for the try and eventually an outrageous, one-handed flick from the sublimely skilful out-half, James Fennelly, put winger Evan Dixon over under the posts. Trinity’s momentum continued and five minutes later, they found themselves with a five metre attacking scrum. The hard work of the front-row was rewarded when the referee awarded a penalty try, replacement tight-head Tom Collis making a real impact.

This left the score at 24-20 to DUFC after an impressive fight-back. Oxford began to tire, and Trinity brought on more replacements who kept the pace of the game high. Another attack from the men in white allowed number eight and captain of the under 20 side, Roghan McMahon, to deftly step the opposition defence and dive over for Trinity’s fourth try. The game ended on a somewhat sour note for DUFC as Dixon was yellow carded for a high tackle. However, they came out on top reasonably comfortably in the end, with the score 31-20.

This was a very valuable exercise for DUFC. There were some eye-catching performances from young players and individuals looking to break into the first team. Regulars Burke, Dermot O’Flynn and Tim Maupin provided leadership and go-forward ball. This match also allowed the players to showcase their skills in front of a large crowd, many of whom will hopefully be attending the crucial, upcoming fixtures against St Mary’s Terenure and, of course, University College Dublin (UCD).