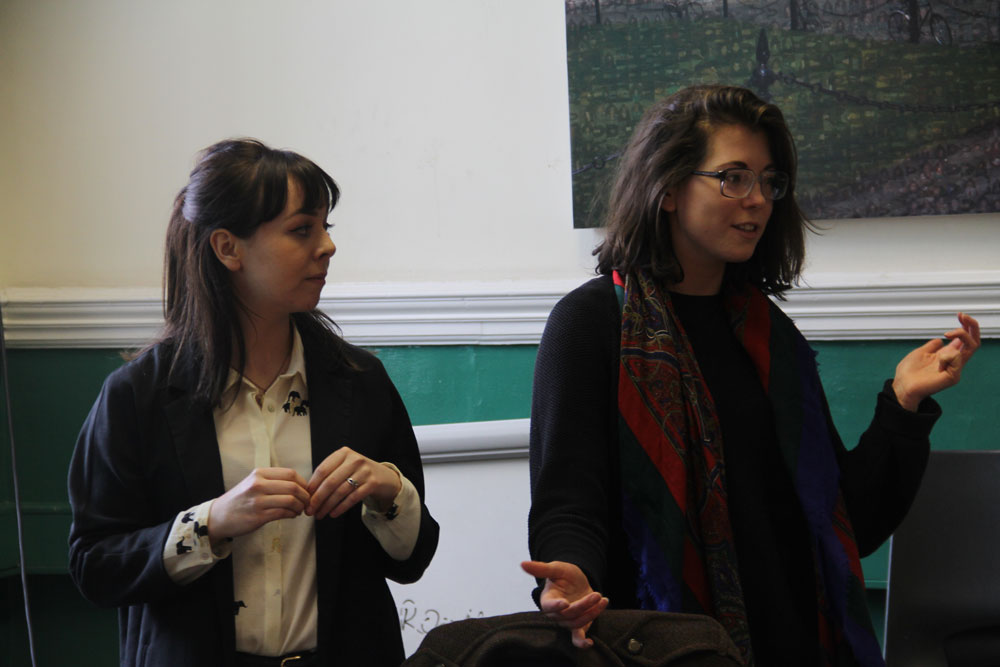 As part of International Women’s Week, this afternoon saw DU Amnesty International host a lunchtime workshop with the artistic initiative Eight Stories. The Eight Stories team believe that the “criminalisation of abortion in Ireland is a constitutional injustice that fails everyone”. Their objective is an important one: to tell our stories and humanise the issue.

The discussion was lead by two of the Eight Stories team, Rachel Botha and Naomi Phillips. They began with a presentation that told their story, how they began, their aim as a group and what they hope to achieve long term.

Eight Stories was founded to “support the aims of the activists already working on the repeal the eighth movement”. It began with the placement of stickers all over Dublin city centre, which were designed to prompt the public to consider the first time they had encountered the word “abortion”. The people of Dublin began to respond to the stickers both negatively and positively. Botha and Phillips relayed stories about how the stickers had been ripped off walls, scratched out and pasted over with white sheets. However, others engaged positively by detailing their encounters with the word “abortion” onto the stickers. Suddenly, an interesting discourse was initiated on the streets of Dublin, “out of the shadows and onto the streets” as they put it. The Eight Stories team were receiving true stories from real people willing to disclose details, big and small in the hope of aiding the repeal the eighth movement. The team was conscious of how social media could give them a platform to access young people, and as such they created a website, Facebook, Instagram and Twitter account.

Next, the team set up the “Gals Gig for Repeal”. The gig was held in the abandoned Tara St building, showing the potential for a disused space to be transformed into a hub for creative minds, while using the arts to convey a political message. The girls showed those present at today’s event a video from the gig. The clip translated a sense of community that was empowering and inspiring. This sense of community seems evident in all aspects of the groups projects. This gig raised €1,600 for the Abortions Rights Campaign. The next “Gals Gig for Repeal” will take place on April 7th.

Finally, the team discussed what is next for Eight Stories. Their very special quality of merging art with the Abortion Rights Campaign allows them to think outside the box. They are currently working on pop-up sound installations that will play snippets of stories from women discussing their abortion experiences. One of the audio illustrations was played to the room, a haunting scream was followed by provocative questions that were answered by abstract sounds that symbolised the actions and reactions of the storyteller. When asked why audio installations, the team answered “they are not listening, so we are getting louder!”. The sound bite was powerful and the room was quiet, pensive and reflective.

The team ended the discussion with a brief workshop, each individual joined a group and on a large sheet of paper jotted down their first encounter with the word “abortion”.
The groups discussed their own personal stories with each other, this exercise reflected the aim of the group, to provide a safe space within which to talk, gain insight and understanding around the issue. Botha and Phillips both reiterated the importance of expanding their reach to the older generations and the more rural areas of Ireland.