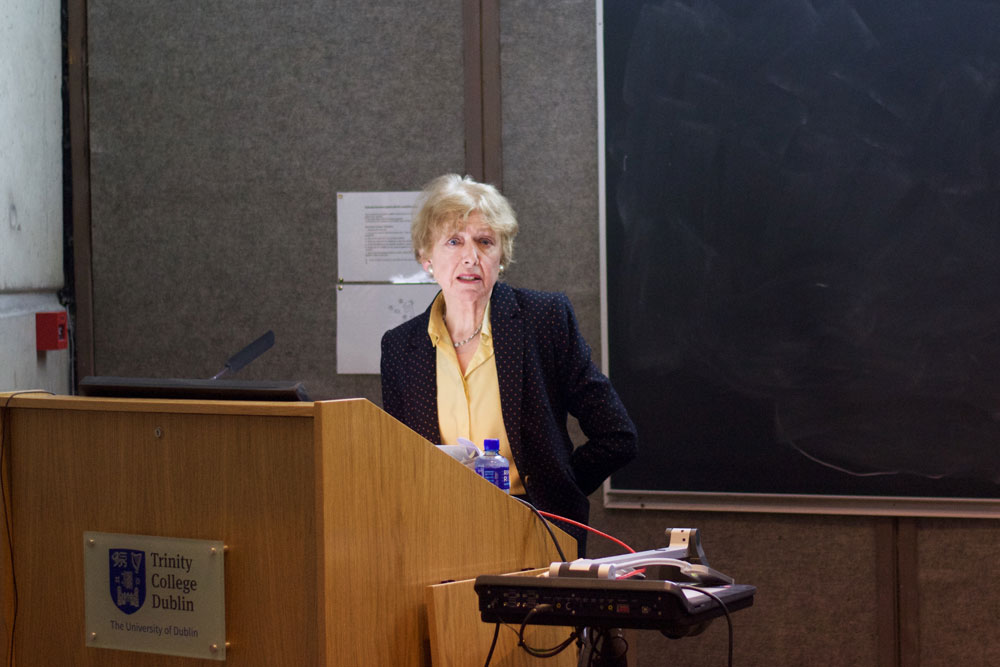 Yesterday evening saw Irish historian Prof Marianne Elliott speak to DU History as part of International Women’s Week. Elliot is the author of biographies on Wolfe Tone and Robert Emmet and has been awarded an OBE. Her talk primarily focused on mixed-religion housing under the Housing Trust in Northern Ireland between 1945 and 1969, with the evening’s lecture anticipating her next book which considers the Northern Ireland Housing Trust as a “benevolent public body”, the downfall of which “spawned civil rights movements and ultimately the Troubles”.

Elliot’s childhood in a mixed-religion suburb prompted her recent foray into the sparsely researched area of housing. As many paper records were destroyed in the conflict, much of the evidence she has gathered is of an oral nature.

Following the Second World War, Belfast was, after London, the most devastated city by The Blitz in Britain. Records show an immediate need for 100,000 new homes and repairs or improvements to a further 80,000. With the highest levels of Tuberculosis in the UK, Belfast experienced extreme overcrowding, with a reported one in 10 babies dying before the age of one. In 1945, a protest took place outside the city hall, which saw Catholic and Protestant mothers alike calling for replacement housing while they cradled their babies in their arms.

Subsequently, William Grant was elected as Housing Minister. Unlike his predecessors, Grant was a working-class man from the Shankill Road. Presenting the Housing Bill in October 1945, he stated the “tragic background of our present housing position … reflects an absence in our country of public feeling”. The few surviving pre-war houses were “death-traps” and well below British standards of construction. Grant called for improved housing, asking: “Who will assume this huge task?”. The answer came in the form of a newly constructed Housing Trust, composed of five charitable and unpaid positions for “good men and women”.

Led by chairman Sir Lucius O’Brien the new Trust received much latitude and few restrictions from the government. 25,000 homes were built over the first 10 years of its existence and 48,000 by 1969. The Whitewell estate, while located outside the city boundaries, received tenants from adjacent areas in North Belfast, thus allowing communities to remain close-knit.

In the early days, these estates prompted anxiety in the existing middle-class suburban families but this soon passed when they saw the wide, green spaces surrounding the trust houses. These dwellings were the first in Belfast built following British standards, and in the interests of child safety the estates had no through roads.

With regard to female emancipation, the trust was strongly progressive and considered a great career opportunity for Northern Irish women. Following arduous training in Building Maintenance and Finance, female housing managers collected rent and diligently oversaw repair work, often staying for a cup of tea and a scone with the inhabitants. Tenancies were awarded on a strict points system with Tuberculosis sufferers, ex-service people and those without an indoor toilet receiving the most points.

However, despite this conscientious work there existed a frosty relationship between councillors and the trust. One rural member from Tyrone questioned the allocation of tenancies, urging trustees to “slip in a few more of the right sort”, referring to Unionists, and stated “we will not tolerate the trust giving houses to Catholics.” Another councillor from Fermanagh called the female trustees “Hitlers … trying to bring us into the Irish Republic”. Fortunately, notwithstanding the disapproval of these councillors, the trust maintained government support until 1969.

In this year, on July 2nd, trust Chairman, Herbert Bryson, and other representatives appeared before the Cameron Commission and were challenged on the religious makeup of the organisation. Questions included. “Was first chairman Sir Lucius O’Brien a Protestant?” and “Why is their no Catholic member on the board?”. Bryson, who had given of his services freely for a number of years, answered that they did wish to appoint a Catholic member and planned to achieve the 2/3 Protestant to 1/3 Catholic ratio.

Elliott considered this interrogation part of “a new harshness pitted against culture”, prompting the decline of a “benevolent and generous organisation”. In the collection of memoirs, she found that whatever side people took in the Troubles, they always spoke nostalgically of the mixed-religion estates. Nowadays, people generally prefer to live in areas of their own religious/political persuasion. However, Elliott claimed North Belfast was “an area to watch”, with politicians from the loyalist estate of Whitewell sharing office facilities with those from the adjacent republican areas of Greencastle and Bawnmore. For the historian, mixed-religion housing “holds the key to [Belfast’s] future” and may soon be possible once again.