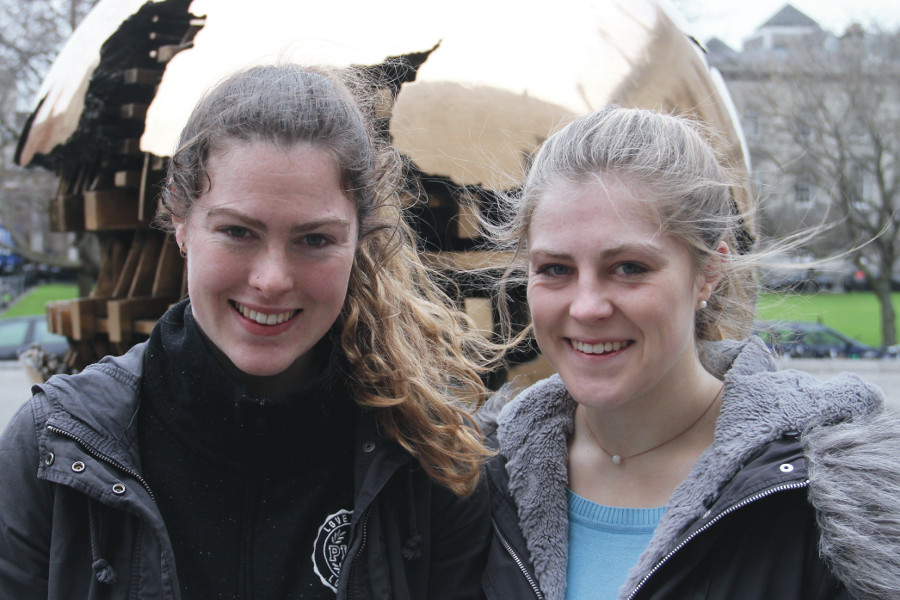 Trinity’s Ladies Hockey Club did not suffer a single defeat on their path to winning the Leinster Division One this season. Currently awaiting play-off matches that could see them promoted to the EYHL, the top league in Ireland, the team is looking to continue its undefeated run in league competition and hopefully reach the very best league for women’s hockey in Ireland. Leading this charge are two of Trinity’s sports scholars, sisters Ailish and Jenny Long. Jenny, the older of the two, is a fourth-year mechanical engineering student and Ailish is in her second year of Business, Economics and Social Studies (BESS).

Hockey has been an important aspect in the sisters’ lives from a very young age, with both having played the sport since they were five years old. As soon as they were old enough, they joined Corinthians Hockey Club. “One of our first hockey sticks was actually our Dad’s old one broken in half”, Ailish says, speaking to The University Times. Their father was club captain of Corinthians Hockey Club and he often took Ailish to watch the men’s matches on weekends. Their mother was a coach at Corinthians and both sisters were coached by her for parts of their careers at the club. Their parents’ heavy involvement with the club meant that sporting careers and home life were inextricably linked. Some of the main points of conversation around the dinner table were, and still are, the progress of the sisters’ teams, personal achievement in the sport, fitness, and all other things concerning hockey. The two sisters were exposed to hockey from a young age and it was an important part of their family relationships. “Hockey is sort of a family sport”, they said when speaking to The University Times.

The two sisters attended The High School in Rathgar, and both were active members of the school hockey team. Ailish was part of the school hockey team when they won the Leinster Senior Schools League, and Jenny was also highly involved with the team. Winning the senior schools league, captaining the under 18 Leinster squad and representing Ireland at underage level are some of Ailish’s biggest achievements in her hockey career. For Jenny, captaining Trinity’s Ladies first 11 and representing Ireland at underage level are the proudest accomplishments so far. That both sisters play the sport at such a high level and have the steadfast support of their parents helps to create an atmosphere that makes devotion to the sport a simple task. “It’s easier to be committed to a sport when you are surrounded by people who are into the same sport, and we are incredibly lucky with our family in that respect”, Jenny tells The University Times.

Being able to compare your sporting achievements to that of your sibling provides a platform of progress-tracking as well as creating a beneficially competitive relationship. The two sisters often attempt to outdo each other in their goal tally for the season. This element of competition in their relationship is at the crux of their sporting success. The constant air of competition between Jenny and Ailish played a part in the fact that both of them received the athlete development scholarship from Trinity.

Jenny found out about the scholarship when she was playing for the Leinster U18 squad. One of her teammates told her about it, and Jenny immediately decided that she would try her hand at getting the scholarship. Seeing as Jenny had received the scholarship, it was obvious that Ailish would attempt to do the same. Although she did not receive it in her first year, her ambitions did not falter, and she managed to get the scholarship in second year. Having the scholarship has benefitted both of their hockey careers hugely. The access to all of Trinity’s sporting facilities and the professional help you receive as a sports scholar are highly advantageous to athletes. For Jenny, the scholarship has yielded new benefits each year and she is always becoming more aware of how to use the facilities that are at her disposal. This year, a new strength and conditioning coach has started, and both sisters emphasised how much they have benefited from such services.

There is a really nice atmosphere within the club, everyone gets along and it is within the relationships of the players that this year’s success is rooted

Having played hockey throughout primary and secondary school, hockey has become an integral part of Jenny and Ailish’s educational lives, and being in Trinity has not changed that. If anything, due to the fact that they are both sports scholars, hockey has gained even more prominence in their education. Both continue to be key parts of the Ladies Hockey club, and Jenny is currently captain of the first 11. The club had a large turnover last season, with many core squad members graduating. However, this year an influx of very talented freshers have looked to fill in the gaps. Both sisters spoke highly of the new club members and have been very impressed with the new additions to the team. The promising development of new players and their current success are both motivating factors for the team to keep pushing forward towards further achievements. According to Jenny: “There is a really nice atmosphere within the club, everyone gets along and it is within the relationships of the players that this year’s success is rooted.”

Having played for Leinster, Ireland, Corinthians, High School and Dublin University Ladies Hockey Club (DULHC), the sisters have experienced a vast range of different squads and sporting atmospheres. In the Leinster and Ireland squads, the atmospheres were very competitive and training was very intense. Especially in the Ireland squad, people were constantly fighting for their place, and while there is an air of success and achievement in the international squad, there can be a lack of a friendly atmosphere. Within club hockey, the age range is very broad at senior level and it can be difficult to relate to everybody on the team. Ailish and Jenny agreed that they have most preferred playing for High School and Trinity’s hockey team. While there is a huge drive for success in the respective teams, the fact that everyone is in the same age range and in the same institution makes for a great social atmosphere. Within the ranks of DULHC, many friendships are formed, and for Jenny and Ailish, it has been the most positive experience of any team that they have played for.