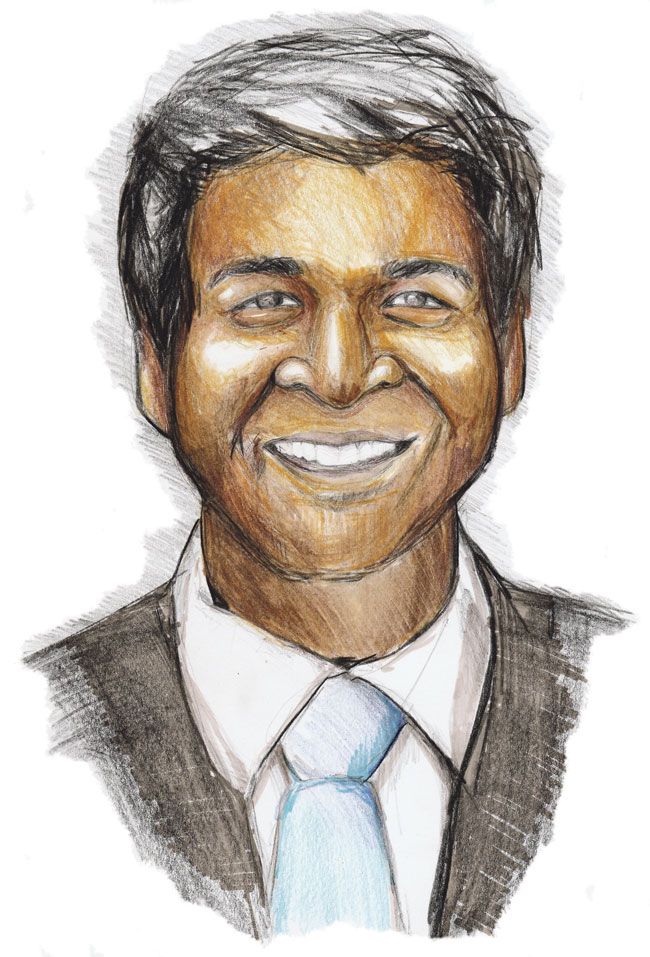 Walking into Dr Raj Chari’s office, the door of which had been left wide open, one is astounded to spot a full set of drums taking up a third of the large office overlooking College Green. This gives you a pretty good sense of the kind of man Chari is: welcoming, cheerful and someone who makes space for productivity. A professor in Trinity’s Department of Political Science for the last 18 years, Chari was born in Swift Current in Saskatchewan, Canada. Curiously, he studied chemistry in the first two years of his undergraduate at the University of Saskatchewan. When I expressed my surprise, Chari explained that he hit what he likes to think of as the “second-year slump”, so that the summer before returning to third year, he decided to take a handful of courses in both general and Canadian politics. By the time third year started, Chari found himself wanting to major in politics.

Chari expands by saying that his “interest had always been in politics”, that “family conversations had always been sort of political over the dinner table”. “Really”, Chari laughs, “I’m a scientist who has become a political scientist.” This background didn’t go to waste, however, as Chari put it to use in his master’s degree. Choosing to stay on in Saskatchewan, Chari developed a mathematical formula to predict the winners of multi-ballot conventions. Using the tools he had got “from science and math”, Chari says, he was able “to understand human behaviour on a social science level”. Science was also crucial in teaching Chari how to think, providing him with the structure necessary to address social science problems objectively, and the ability to remove himself and his own opinions from the situation: “There’s nothing worse in political science than people saying things like ‘Well, I believe this, therefore it is’. We should look at it based on evidence.”

It’s very difficult, I think, for your generation to be able to say I want to stay in academia because the market is so saturated

On choosing academia, Chari pointed to his love for research and investigation. It began with the completion of his master’s, after which he simply wanted to do “a longer study”. Living in Madrid at the time, Chari found himself doing his PhD on the Spanish socialist party and why, paradoxically, they were pursuing right-wing, “neo-liberal or Thatcherite policies”. At the end of his thesis, Chari knew he wanted to continue with investigation. He received a three-year contract here in Trinity in 1999, which turned into a permanent contract that, Chari surmises, “worked out perfectly fine”. Yet, he acknowledges how difficult it is simply “to get your foot in the door”: “It’s very difficult, I think, for your generation to be able to say I want to stay in academia because the market is so saturated.” Clearly, academia is heavily dependent on the opportunities that present themselves along the way. Chari confirms this, asserting that “a lot of it’s luck, a lot of it’s the opportunity”.

Speaking of the next generation, it becomes obvious that Chari is passionate about teaching: “As you get older, I think one thing that becomes clear is that how you train the next generation of leaders is equally if not more important than your own research.” As coordinator of the Introduction to Political Science module, Chari is one of the first professors that political science students encounter in their university degree. It is one of the largest classes in college, yet for Chari this makes no difference: “For me, it doesn’t really matter if you have 10 students in the room or 300, it shouldn’t matter.” He tries to make every lecture as interactive, inclusive and as much like a seminar as possible. For example, before the start of every lecture, Chari plays “a political song”. Despite criticism that his song choices are only from the 80s, Chari perseveres, playing classics such as “The Queen Is Dead” by The Smiths and “One World is Not Enough” by The Police. “Teaching that class is really important for me and to make sure to do a good job of it”, he says. “Having a child who is the age of the students I’m teaching, you realise even just from her own experience, how important it is for students to have a good lecturer because it can make or break their career, or their interests in a certain area.”

Speaking to The University Times Dr Michele Crepaz, an Associate Professor in the Department of Political Science, notes that Chari succeeds in his aim to teach the next generation. Over the course of seven years, Chari has not only been a mentor to Crepaz but a principal investigator, a PhD director and supervisor, and now, finally, a colleague. Without hesitation, Crepaz stresses that “students love him”. Speaking of his PhD, Crepaz recounts: “He has that touch. He knows when he needs to step in and he knows when he needs to hold back and let you do what you need to do, which is very important for, not a successful PhD, but an enjoyable PhD.”

It is obvious that Chari cares for his students. Certainly, he doesn’t hide his prejudice towards them. Out of all the places he has ever taught at, including Madrid, Paris and Beijing, Chari insists that Trinity students are “the smartest”. Indeed, he credits this intelligence as one of the reasons he has stayed in Dublin and remarks that “they’re super smart. I tell them that all the time. I don’t know if they ever really take it that seriously”.

We all have that one teacher who we look back on fondly. For Chari, that “one good professor” was “a guy called Duff Spafford”. Chari acknowledges the power and influence teachers have on their students, and the fact that they “can really shape what you do or don’t do for the rest of your life”. Clearly, Spafford’s influence was for the better, as Chari has dedicated part of his latest book, Life After Privatisation, to the man and his memory. Published in 2015, the book took Chari and a team of research assistants over five years to put together. In essence, “the book was about looking at planes and cars and electricity companies after they were privatised or sold”. Commenting on its distinctive cover, I watched Chari’s face light up with excitement. He had wanted “something art deco” and was delighted with the result: an original poster of a car called the Hillman Galaxy 1932. Speaking to The University Times Chari’s publisher, Dr Dominic Byatt of Oxford University Press, gives an overwhelmingly positive perspective on the book’s formation, and its author: “Raj Chari is in many ways a publisher’s dream. He comes up with very neat research puzzles – the kind where you think ‘why has no-one asked that before?’ – and then pursues them with enthusiasm, determination, and ingenuity.” “He’s great fun to work with on a day-to-day basis, always thinking outside the box”, Byatt continues.

Chari is perhaps best known for his work on lobbying regulation.  In 2010, he published Regulating Lobbying: A Global Comparison together with Dr John Hogan and Prof Gary Murphy. Things, however, didn’t get off to the most communicative of starts: “The funny thing on that is, John’s from Kerry and Gary’s from Cork, and the first time we had the meeting with the three of us, it was like ‘where’s the translator?’”. Thankfully, relations improved rapidly from there. Indeed, when speaking to Murphy, who is Head of the School of Law and Government in Dublin City University (DCU), his first words were: “We all love Raj.” Citing Chari as possibly his closest research collaborator, Murphy continues: “He’s tremendous to work with. He’s everything you would want in a colleague … I consider him one of Ireland’s premier political scientists”.  The sentiment was shared by Hogan, a Dublin Institute of Technology (DIT) Research Fellow, who commented, in an email to The University Times: “Raj has a wonderful ability to elevate the work of his colleagues and collaborators while making them all feel like a band of brothers engaged in some great research enterprise. Raj is a generous collaborator and a truly committed academic, and a wonderful human being.”

All three were quick to point out the impact the book had. Chari underlines that “something rather unexpected happened”, in that “it was consumed not just by academics but by policy makers”. Hogan emphasised that producing “a book on global lobbying regulations seems like common sense now … But, up to 2005, no one had thought of such a thing”. As such, the research made waves in the world of lobbying and lobbying regulation policy, in part resulting in the 2015 Regulation of Lobbying Bill. What is plain to see is the pride shared by the three authors, and the fact that, as Hogan puts it, “our research has been meaningful for Irish democracy and democratic transparency and accountability”.  Chari comments on the frustration sometimes experienced by academics and the feeling that they are speaking and writing into an echo chamber. With Regulating Lobbying, they managed to “transcend the academic world and have a real impact on the way governments were thinking, on the one hand, and also lobbyists themselves”. It was the first time any of them had managed such a feat, and the experience was a powerful one.

Finishing up with a more relaxed discussion of pastimes and work-life balance, Chari confirms the importance of family and music in his life. When I ask him the question: “What three words would the people who know you best describe you with?”, he looked aghast. He responds by laughing saying “I feel like Donald Trump when I say: ‘a great guy’”. Currently busy with the second edition of Regulating Lobbying, among other things, Chari, as Byatt captures it, “is simply energized by the possibility of finding answers to the many puzzling features of our political world”.