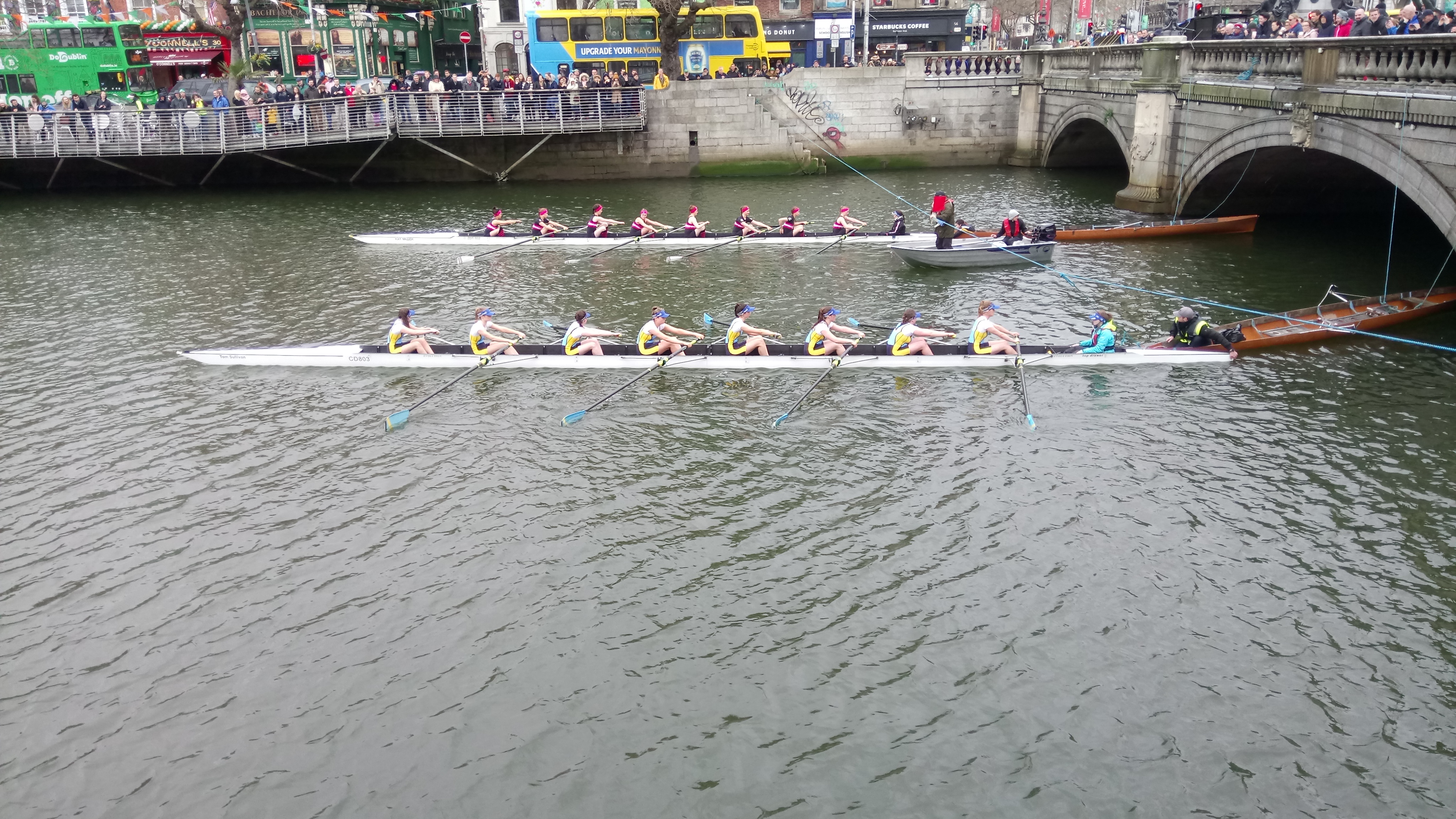 On Saturday afternoon, tourists recovering from their St Patrick’s Day exploits or gearing up for the Ireland-England showdown in the Aviva were treated to glimpses of the annual Colours Boat Races between Trinity and University College Dublin (UCD). The four races, which began at O’Connell Bridge and took in much of Dublin’s Georgian architecture before finishing at St James’s Gate, were watched by a brave group of supporters from both colleges as well as curious visitors decked in green. Once again, UCD were triumphant in three of the four events on the day and take the bragging rights back to Belfield for another year.

The first prize up for grabs was the Sally Moorhead trophy for novice women, which began slightly after the stated 1.30pm start time, as both crews battled the elements and the current to line up under O’Connell Bridge. After a strong start from Trinity, who were racing on the north side of the river all day, controversy struck. UCD pulled ahead of Trinity and crossed to the far bank, before rowing through Trinity’s designated arch. They then held their nerve for the final stretch and finished comfortably in front. The deviation in the route they took though prompted some speculation among onlookers that they might be disqualified from the race and although Trinity challenged the result, the victory stood and the first blood of Colours 2017 went to UCD.

Indeed it was an eventful opening to the day’s festivities, as no sooner had the novice women set off did a river cruise boat, Spirit of Docklands, emerge from under O’Connell Bridge, nearly colliding with the starting line. The skipper emerged from a hatch looking very bemused, much to the amusement of the crowd, before reversing sheepishly back under the bridge. Hopefully the passengers looking forward to their tour of the Liffey banks were suitably reimbursed.

Next up was the Dan Quinn Shield for the novice men. UCD, appropriately enough given the weekend that’s in it, were wearing their saffron yellow and St Patrick’s’ Blue strip, while Trinity’s men were sporting their blue, black and white gear. After an incredibly close race, with both crews ahead at stages, Trinity called on their reserves of strength to pull away and won by two lengths, to even the score at one apiece.

The Corcoran Cup for the senior women followed. This proved to be the most dramatic race of the day, a tug-of-war contest between two teams at their best, which was ultimately settled by an unfortunate setback for Trinity. With both boats almost level for the last few hundred meters, Trinity lost their rudder in the strong current and UCD took full advantage to finish two lengths ahead.

Then in the last race of the day, the Gannon Cup for senior men, Trinity fought hard to level up the score to two each and reclaim the trophy but were outdone by a relentless display from UCD. The boys in blue did not let up once and secured the overall victory in style. Celebrations were somewhat muted because of the absence of buses for supporters this year, which was a pity, as well as the steady drizzle that had supporters huddled under umbrellas throughout. Neither could have been helped unfortunately, with An Garda Síochána prohibiting buses from following the races, possibly due to security commitments in the build up to the match at the Aviva.

The Trinity teams enjoyed a dinner at the Pav afterwards to reward them for their sterling efforts and they can look forward to several more race meets before their season is out, including a trip down to Skibbereen the day of Trinity Ball.