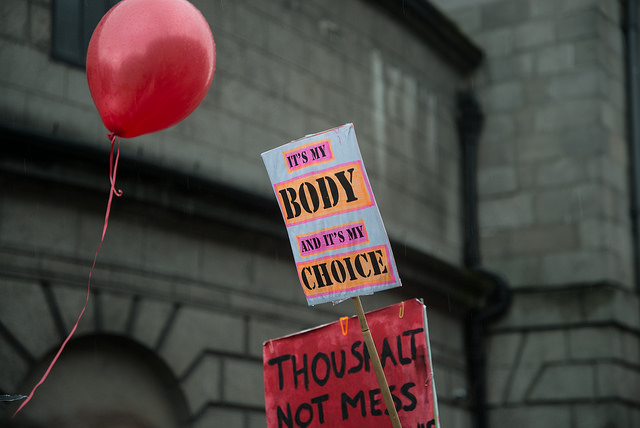 The Citizens’ Assembly this evening voted to recommend a constitutional change that would replace the eighth amendment with a constitutional provision authorising the Oireachtas to legislate on abortion.

The recommendation means that, after months of deliberation and discussion, the Citizens’ Assembly has not recommended a referendum on a full repeal of the eighth amendment, as many pro-choice campaigners had hoped. Instead, in a series of three votes today, which were fraught and sometimes chaotic, the assembly eventually voted to support giving the Oireachtas exclusive power to legislate on abortion.

The third ballot of the day followed votes this morning that saw the assembly first vote overwhelmingly to support a change in the eighth amendment, and then vote to recommend that the eighth amendment be replaced or amended, rather than removing provisions on abortion from the constitution.

In Ireland, any constitutional change requires a referendum. The change suggested by the Citizens’ Assembly – if the Oireachtas chooses to act on the recommendations of the assembly – would see citizens vote on whether to delegate the decision on abortion legislation to the politicians in the Dáil and the Seanad.

A referendum on the eighth amendment then, if the suggestion made by the Citizens’ Assembly is followed, would mean that while the amendment is not repealed – the focal point of the pro-choice campaign – it would be substantially altered to potentially allow the Oireachtas to enact more liberal abortion legislation. However, the Oireachtas could also choose to restrict abortion rights in Ireland or to maintain the law as it exists currently.

It remains to be seen how willing the Oireachtas will be to grant such a referendum, considering the unwillingness shown so far by many politicians to debate the issue.

The assembly members rejected option two, which stated that the amendment could be replaced or amended with a constitutional provision that would authorise the Oireachtas “to legislate to address termination pregnancy, any rights of the unborn, and any rights of the pregnant woman”.

Speaking to the members of the assembly today, after the vote was announced, Ms Justice Laffoy, the Chair of the Citizens’ Assembly, asked the members to be “respectful of your fellow citizens and alternative viewpoints to your own”.

She added that she hoped “everything will go ahead in a less fractious manner tomorrow”.

Established in 2016, the Citizens’ Assembly is made up of a body of citizens who deliberate on a number of issues referred to it by the Oireachtas, including abortion, climate change and fixed-term parliaments. Today’s recommendation is only likely to further criticisms of the assembly, which has been attacked by both those who oppose abortion and pro-choice activists .

Sunday will see the assembly vote for the last time on the issue of abortion before the final report of the Assembly is drafted. The publication of that report is due in June of this year.

Speaking to The University Times this evening, Linda Kavanagh, Media Spokesperson for the Abortion Rights Campaign, praised the significance of the vote today, stating that it was a “not a step backwards, but a step forward”.

Tomorrow’s vote will see the assembly decide on its what it will recommend be included in legislation on abortion, specifically, the reasons – if any – for when termination should be legal in Ireland, as well as gestational limits. The assembly will vote on a number of options for when abortion could be legal, including where there is a real and substantial risk to the life of the woman, real and substantial risk to the life of a woman through suicide – both of which are currently legal in Ireland – as well as where there is a risk to the health, or to the mental health of the mother, where pregnancy is the result of rape, and where the unborn has a fatal foetal abnormality, among others. All options presented provide for citizens to choose a gestational period up to which they think abortion should be legal in the given circumstance, as well as a “never for this reason” option in each case.

Students have been one of the most vocal groups in the campaign to repeal the eighth amendment, with thousands joining the Strike 4 Repeal in March and students unions across the country campaigning on the issue. The recommendation today from the Citizens’ Assembly is likely to leave activists and campaigners at a crossroads. With a referendum on a repeal of the eighth amendment not recommended by the assembly, pro-choice supporters will need to decided whether to support a recommendation that would see the Oireachtas tasked with legislating on abortion, rather than the referendum on repeal many were calling for.