Students from across the country joined crowds at O’Connell Bridge today for Strike 4 Repeal, calling for a referendum on the repeal of the eighth amendment, with early estimates suggesting that well over 3,000 people were in attendance at the demonstration.

Over 300 students from Trinity College Dublin Students’ Union (TCDSU) attended the demonstration, meeting in Front Square before marching to the bridge.

Speaking to The University Times ahead of the march, TCDSU President, Kieran McNulty said he was “very happy” with the number of students attending. The crowd of over Trinity 300 students, gathered in Front Square, had exceeded his expectations, he said.

The crowd was addressed before they left Trinity by TCDSU Gender Equality Officer, Rachel Skelly. Speaking to The University Times before the march, she said it was “incredible to see so much solidarity”.

“Turnout is way better than we expected. It’s going to get bigger and the government is going to have to listen”, she added.

The crowd at the bridge was mostly young, with many dressed in black and holding placards and signs. Numerous unions reported large turnouts, with the Vice-President of the National College of Art and Design Students’ Union, Lorcan Gilligan, (NCDSU) estimating that 200 students from the college attended the march.

Numerous unions attended the march, including University College Dublin Students’ Union (UCDSU) and Cork Institute of Technology Students’ Union (CITSU). Speaking to The University Times ahead of the march, President of UCDSU said: “The student voice, plays a significant role on advocating for repeal, working and campaigning in collaboration with other representative groups.”

Speaking to The University Times at the march, Niamh McCormack, an organiser with UCD for Choice, stated that she was “so moved” by today’s turnout. “We had our own rally in UCD before we came out and we shut down the campus”, she continued, adding: “We’ve come out here and O’Connell bridge has been shut down for almost two and a half ours and it’s just incredible considering this was an impromptu call to action”.

“It symbolises that we get numbers not just when we organise but that the ordinary people when they’re called to action want tog et involved.”

Chants from those in attendance included “Enda, Enda, we want a referendum!” and “here’s your Citizens’ Assembly!”.

Speaking to The University Times during the march, one of the organisers of Strike 4 Repeal, Jen O’Leary, said the group were “overwhelmed” with the numbers.

The large presence, she said, “symbolises that people are aware that the Citizens’ Assembly is a stalling tactic”. 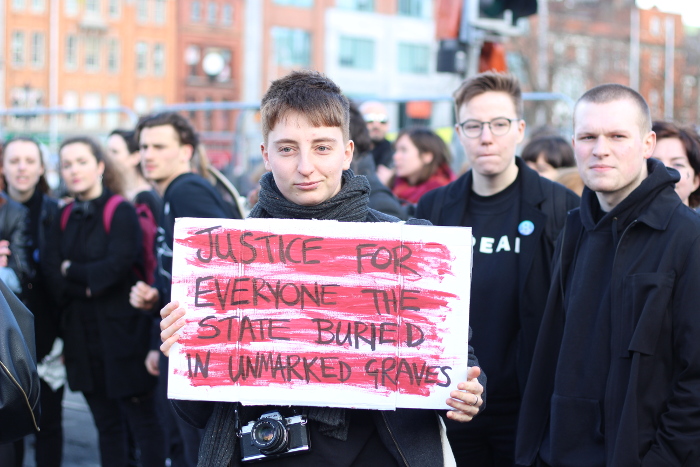 Ivan Rahkmanin for The University Times

Trinity’s Strike 4 Repeal group have been promoting the strike across social media over the last few weeks, calling on students to walk out of lectures, to wear black and add the strike’s symbol, a lightning bolt, to their Facebook profiles in solidarity with the movement.

Speaking to The University Times ahead of the march, Aine Palmer, one of the senior members of the group, said the turnout is “great”, and she only expected it to get bigger.

“Seeing all our colleges come together is only going to blow our minds as the day goes on”, she said.

The Union of Students’ in Ireland (USI) attended the march, with many students carrying USI banners. At the weekend, President of USI, Annie Hoey, addressed the Citizens’ Assembly, calling for a repeal eighth amendment and the introduction of free, safe and legal abortion services in Ireland.

Speaking to The University Times ahead of the march, Síona Cahill, Vice President for Equality and Citizenship of the Union of Students in Ireland (USI), said: “I think it’s going to be incredibly effective, I think a lot of people didn’t see this coming. I don’t think people thought it was going to be as big.”