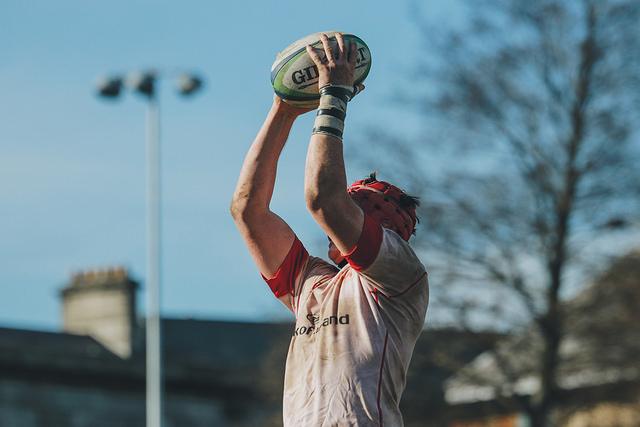 As a precursor to Trinity Ball, the annual rugby colours match took place in the Belfield bowl on Friday evening. This fixture has produced some cracking ties in the last few years and the most recent game was a wonderful spectacle. The Dublin University Football Club (DUFC) players would not have headed to the ball in great spirits as they were defeated by their hosts, University College Dublin (UCD), in an entertaining game in ideal conditions. As both sides are in Divison 1A of the All-Ireland League, this year’s match also had league points at stake so it was as important as it has ever been.

To win away from home was always going to be a tough ask for Trinity against a side that included Peadar Timmins, Andrew Porter and Barry Daly, all of whom have featured regularly for Leinster in the Pro12 this season.

DUFC began the game strongly to earn a penalty attempt for winger Bryan Mollen but he came up short with the 35m effort. It was UCD tight-head prop Porter who got the first score of the game when he crashed over after 10 minutes. Ireland under-20 full-back Ciaran Frawley knocked over the extras to give the home side an early 7-0 lead. This was consolidated by a penalty from Frawley a few minutes later which left the score at 10-0.

Trinity came back into the game when a risky, but extremely clever basketball-style pass from Colm Hogan put Mollen over in the corner. The winger converted his own try and the score was 10-7 with five left in the first half. Then came the most impressive individual moment of the half. Winger Tommy O’Brien, another under-20 international, chipped and gathered his own kick as it bounced over the try line to give UCD a strong 17-7 halftime lead. This was a killer blow for Trinity as it came just before the break.

The visitors lost their captain, scrum-half Brian Slater, soon after the resumption to injury but replacements Rowan Osbourne and Cian O’Dwyer brought energy and impact to the game. Against the run of play, UCD scored another great try on the counter attack when Daly ran on to Matthew Gilsenan’s superb offload to speed clear of Kyle Dixon’s attempted tackle. It did not take long for DUFC to bounce back. After establishing field position, they won a series of scrum penalties before the hard work of the front row was rewarded by the referee with a penalty try. This was a fine achievement considering the strong pack they were facing. At this point the Trinity fans, many of whom were clad in black tie, really made their voices heard.

DUFC continued to attack with intent and dominated proceedings for a period of time. Michael Sylvester, fresh off the bench on his colours debut, scored a fantastic solo effort after cutting the UCD defence in half with his speed and footwork. The conversion was missed and the score stood at 22-19 with 10 minutes remaining. This was to be as good as it would get for Trinity.

O’Brien scored his second try of the evening to kill off the game as a contest. DUFC went in search of the losing bonus point but another Frawley penalty left the final score at 32-19. This was a disappointing end to what had been quite an even contest. Returning Trinity players will be eager to make amends and bring the trophy back to the Pav next season.

With Terenure and Garryowen earning bonus point victories over the weekend, Trinity now sit ninth in the table, in the dreaded relegation play-off spot. However, they are only behind the aforementioned teams on points difference. DUFC host Terenure in College Park next week in the final game of the league campaign. A win guarantees the students’ safety and a losing bonus point will be enough if Garryowen earn nothing away to Lansdowne. If they were to finish below these two sides in the table, DUFC would have to play another game against the second-placed side from Division 1B. The winner of this match will play in 1A next season. Trinity will hope it does not have to come down to that. They will be looking for all the support they can get next Saturday as they fight for the right to remain in Division 1A of the All-Ireland League next season.