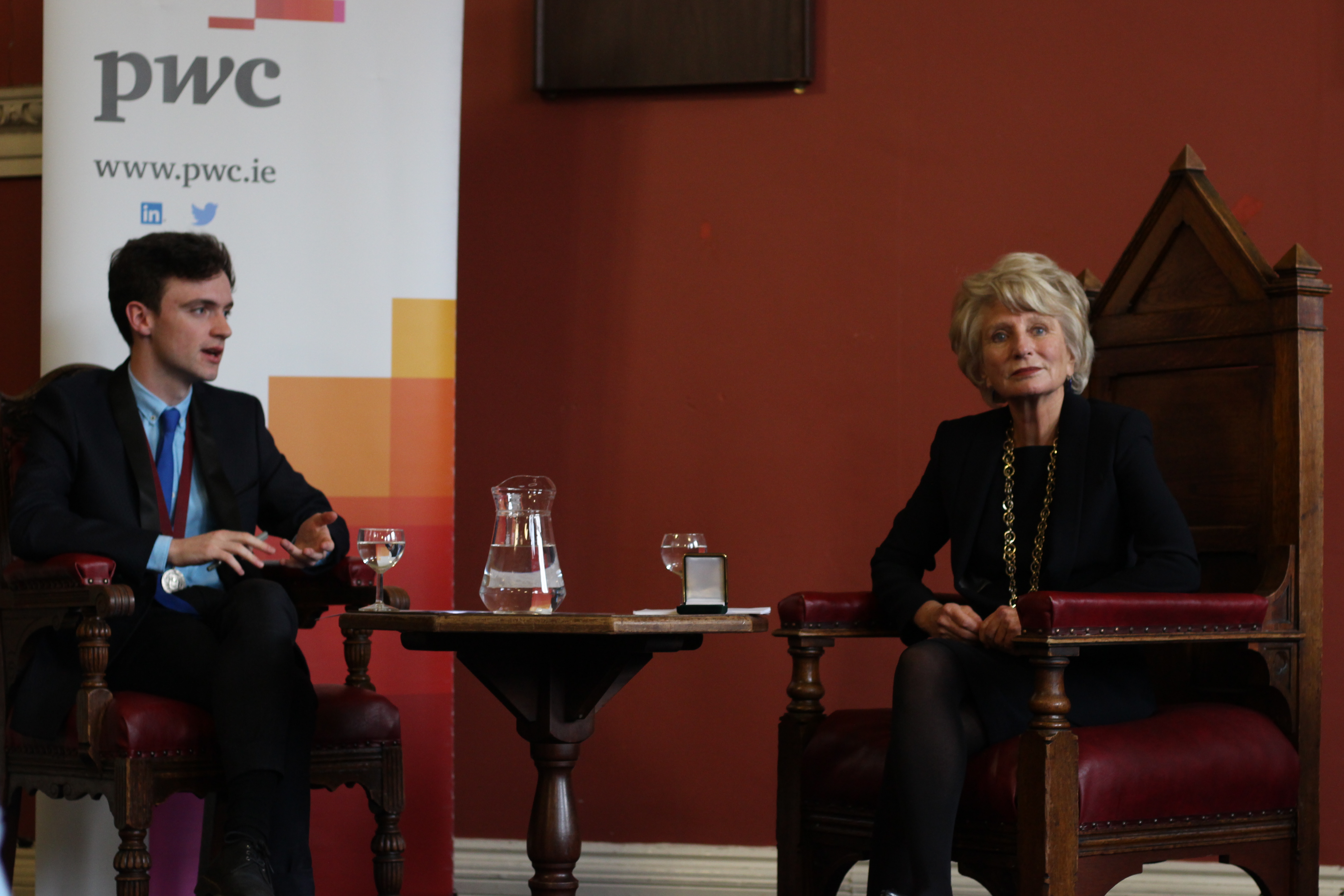 Jane Harman, current director of the Woodrow Wilson Centre, visited the University Philosophical Society (the Phil) today to accept the Gold Medal of Honorary Patronage as the society’s final speaker of the year. Throughout the event, Harman focused on the difficulties faced by women in politics, the current state of US foreign policy and the inability of politicians to set aside partisan differences to reach solutions.

Beginning with a speech about the difficult and “terrifying” situation that the Democratic party is in, Harman set the tone for the rest of the event by referring to the lack of change in the congressional “business model”. She also spoke about the recent announcement of a general election in the UK, praising Theresa May in her leadership skills. Before beginning the interview section of the event, the first female Director of the Wilson Centre mentioned the importance of female leaders around the world, adding that she was impressed with the number of women in Irish politics and singling out Mary Robinson in particular.

To finish her speech, Harman finished with a few words of encouragement for those in the audience that were considering entering the world of politics. With her close friend and fellow honorary patron Justice Ruth Bader Ginsburrg as an example of an excellent public servant, she implored all of the audience to be “brave and feisty” in their future endeavours.

After requesting for those present to make the questions “really hard”, Harman was first asked about her opinion on the changing situation for women in politics. She responded by referring to her past, as she first had to sit exams to enter law school in a male-only college before joining a small minority of women in Harvard Law School. Acknowledging that there were “far fewer women than there are now” in Congress when she was first elected to office, she reiterated that women face a far greater challenge when first starting in politics. Her main piece of advice for everyone was to “to be excellent” in order to break through stereotypes and ensure that they are viewed purely as candidates rather than as men or women.

A large number of questions throughout the event led to an extended discussion about today’s politicians being unable to find solutions to important issues, with Harman criticising the members of Congress that punished those that were bipartisan. She also mentioned this as being the reason for her leaving office to join the Wilson Centre, as for her, “pulling the country together is more important than getting re-elected”.

Harman also spoke about the US’s foreign policy, responding to questions about the situations in both Syria and North Korea, areas which she specialised in during her time serving on all the major defence subcomittees in Congress. Referring to the civil war in Syria, she said that she believed that the situation has been poorly handled, emphasising the importance of a political resolution rather than simply “carpet bombing Syria”. However, despite her belief in a peaceful end to the situation, she gave her support for Trump’s recent missile strike, adding that she wishes that Obama had made a similar decision four years earlier and that history would judge him for his inaction in the future. The ex-congresswoman also spoke about the the North Korean situation, drawing parallels between the current events and the outbreak of World War I. She warned about the dangers of “hot rhetoric”, which could lead to disastrous consequences, and stated that Xi Jinping would be a key figure in calming the crisis.

As was the case with most politicians visiting the society this year, the topic of “fake news” was raised during the interview section. Harman responded strongly to this, stating that she was “becoming depressed with our media”, and that it was no longer a learning experience. She also mentioned that social media had changed the press entirely, with many writers unfortunately resorting to search for clicks rather than the truth.

Towards the end of the event, the conversation came back to issues of equality in politics, with a member of the audience asking Harman about her opinion on gender quotas. Harman responded by saying that she was generally against them, but that they may be necessary to “get to critical mass” and make it less difficult for the pioneering women that are the first in their field to progress.

Harman finished with another short speech in which she once again encouraged the students present to get involved in politics as it is “the most exciting career [they] could have”. She said that she was hopeful about the future of politics from seeing how interested in the new generation is in political issues, and that she was excited about the ability of young people to get behind a cause and set aside bipartisan issues, a radical change from current politicians around the world.