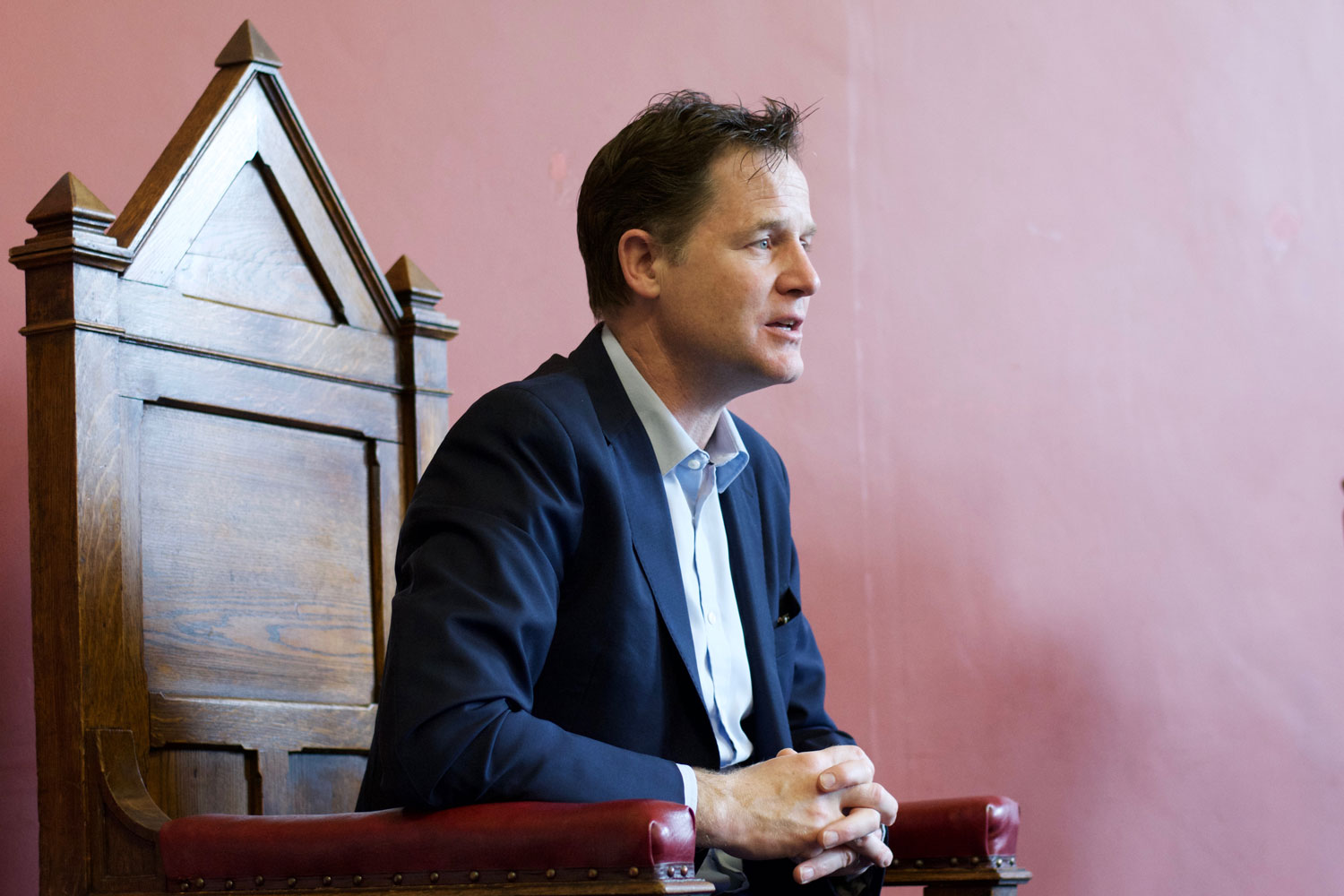 Not all political careers end in failure. Nick Clegg’s did. The rise and fall of the Liberal Democrats is well-documented – led by Clegg into coalition government with the Conservative Party in 2010, the party was eviscerated in the general election five years later.

That career, however, seems to be enjoying a remarkable rebirth. There was a swing in Clegg’s step as he entered the Graduates Memorial Building (GMB) today, the walk of a man confident that he is back on the right side of history. It’s difficult to work out whether history will be kind to Clegg. His fall came before politicians could lie their way into high office and the political centre began to collapse.

Few speakers who’ve come to Trinity over the last 12 months have failed to mention the challenges facing progressive politics, the rise of Trump and the tragedy of Brexit. Week in, week out, various speakers, from Nicola Sturgeon to Anne Robinson, have spoken of the challenges facing truth, freedom and justice in the coming years. Few have provided any real answers.

Clegg gave it his best shot today. Yes, at times, I was reminded of Robinson’s claim that the UK lacks politicians who “don’t talk to you as if your dog has just died”, but in general he came across as earnest, sincere and genuinely passionate about rebuilding politics.

From attacking first past the post (an “outrageous” system) to questioning the role of Labour in the future of British politics, he was franker and honest than most about the current state of Britain and its future.

Indeed, one of the most notable parts of his talk was the sheer variety of insults he hurled at Theresa May, Michael Gove, Boris John et al.

May, he said, “is an unelected remainer pursuing a hard Brexit strategy”. Johnson and Gove are “running for the hills and not taking responsibility” and Farage, as someone who has repeatedly failed to get elected, is a “spectacular political failure”. Jeremy Corbyn, the embattled Labour leader, is a “nice chap”, but “more keen to talk about his allotment than Britain’s future in the EU”.

The entire address from Clegg could have acted as a brief summary to the topsy-turvy world of post-Brexit UK, which he described as “bewildering” and full of “political cross-dressing”.

The majority of his anger was focused on Brexit and its possible impact on the future of the relationship between Ireland, UK and the EU. May, he said, has chosen the “low road of what was convenient and what was sought after by the right wing of her party”.

The pursuit of a hard Brexit by May clearly agonises Clegg. His talk suggested alternative pasts and possible futures, where May could reconsider her approach to Brexit. She has, he said, interpreted her “disparate mandate in an incredibly narrow way”. The only way forward is to “retreat from some of those decisions that she took for no more than base political reasons”.

Focusing his speech on Ireland’s relationship with the EU, Clegg discussed on what the border means for both the North and South of Ireland. He referred to the “astonishing interdependence” between Ireland and the UK, and attacked the “opportunists and charlatans” who led the UK out of the EU. They “lent no thought at all to what it meant at all to your community”.

He needn’t have bothered. Three years on from being relentlessly parodied online, young people seem to re-warming to Clegg. He received very few difficult questions during the course of his talk – many students clutched his book and one question even asked Clegg what he thought the Lib Dems greatest achievement in government was.

Another student, a self-confessed Tory voter, asked him what the future of the UK looked like. Clegg, clearly intrigued, asked her why she voted for the Conservatives. As she began to discuss her disillusionment with the party over its stance on student loans, Clegg interrupted her: “I know why you didn’t vote for the Lib Dems.”

It was a moment of lightness in what was quite a serious discussion, touching on border technology and trade economics. Clegg didn’t mention Edmund Burke, the founder of the Hist. But the political philosopher might have been a good fit in the Liberal Democrats today – it’s certainly unlikely he would have had the same zeal for the result of radical referendum vote as many of his conservative descendants.

His decision to enter coalition government and back an increase in university tuition fees to £9,000 was described by many as one of the great post-war political betrayals. Then Brexit happened.

The Lib Dems collapse won’t be reversed easily, and Clegg isn’t naive enough to believe his party will win the next UK election in 2020. But he still believes that people must reach out beyond “tribalism” if politics is to develop.

Of course, you’re only as big a failure as the person next to you. Watching Clegg give a speech to the thousands gathered in London to show their support for the EU last month, it was easy to forget this was once a man vilified for his deal with the Conservatives.

Despite his own political battles, he remains hopeful for the future. The Brexit vote could be a “catalyst” for change, he says. “The one thing which encourages me to retain some hope for the future is that you cannot deny the young the future they are entitled to shape in their own image.” He admitted though, as the talk drew to a close, that “pretty much all my political predictions have always been wrong”. Let’s hope this is one call he gets right.